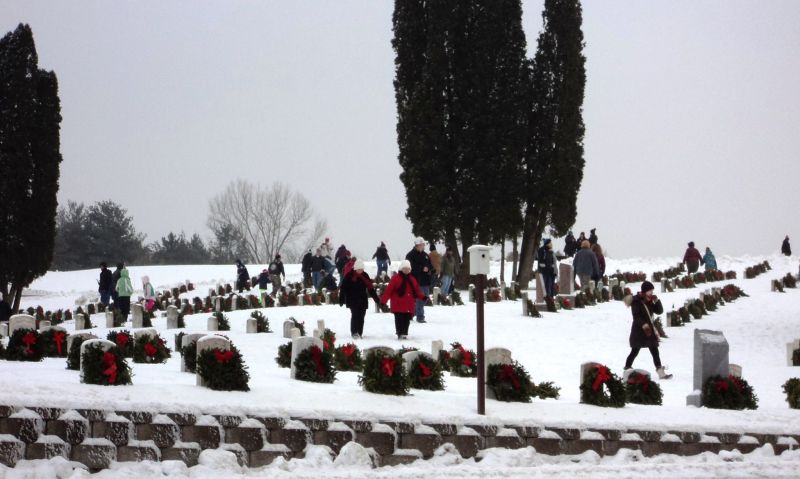 Last Saturday, Dec. 14, more than 1 million remembrance wreaths were placed on veterans’ gravesites across the nation as part of Wreaths Across America (WAA). The program provides the opportunity for family members, friends and strangers alike to honor those no longer alive who at one time wore the uniform of their nation.

And at WAA events from coast to coast, American Legion Family members were present, either hosting or participating in the event, or fundraising to cover the costs of the wreaths.

In places like Quincy, Mass., and Elmira, N.Y., Legion Family members participated in events that placed a combined more than 14,000 wreaths at area cemeteries.

And in Wisconsin, District 8’s American Legion Riders spearheaded an effort that again provided a wreath for every veteran’s grave at the Wisconsin Veterans Memorial Cemetery in King. More than 7,200 wreaths were placed for the second straight year. Click here to watch a video of the event.

Elsewhere, Legion Family members were busy last weekend in carrying out WAA’s mission of both honoring veterans and teaching future generations the value of their sacrifice. The following is a sample of how Legionnaires, American Legion Auxiliary members, Sons of The American Legion and American Legion Riders helped out with Wreaths Across America.

In Willits, American Legion Post 174 teamed up with the Willits FFA, 4-H and community members to place more than 500 wreaths at the Willits Cemetery. The event included a ceremony where wreaths were placed to honor all five branches of the military, the Merchant Marines and U.S. prisoners of war and missing in action servicemembers.

• In Scituate, American Legion Post 144 placed around 550 wreaths at Cudworth Cemetery. “It’s wonderful. We had about 40 kids here,” Past Post 144 Commander Steven Litchfield told WATD. “We did 550 bows in probably half an hour, which is pretty amazing. A lot of hands makes short work. They got into it. I explained what we’re doing and why we’re doing it. I had kids coming up and thanking me, and I’m thanking them. It’s neat, we really love doing this.”

In Victor, an effort that began in 2018 with seven wreaths on seven graves grew to more than 500 wreaths being placed in three locations — Boughton Hill, St. Patrick’s and Village cemeteries — by American Legion members, local Boy Scouts, Girl Scouts, Cub Scouts and volunteers.

“It’s gratifying to me to know that all the graves here for the veterans are going to have a wreath for Christmas,” American Legion James Cooke Post 931 Finance Officer Bob Haggett told the Daily Messenger. “I had some help from a lot of people who donated or volunteered and are out here in the rain today.”

More than 500 graves were decorated with wreaths at Coweta’s Vernon Cemetery. Members of Coweta’s American Legion Post 226 participated in the event by laying ceremonial wreaths in honor of each military branch.

“It is important to remember our veterans and to recognize the people who have served,” Post 226 Commander Shawn Fitzgerald said. “Everyone who has served, whether in combat or non-combat positions, they are all veterans and equally respected by our organization. People need to remember them.”

• In Charleston, American Legion Riders Chapter 179 conducted its first Wreaths Across America ceremony at Live Oak Memorial Garden in West Ashley. The event’s keynote speaker was retired U.S. Marine John Coy, a member of Post 179. "There's nothing greater than remembering and honoring those individuals who have served,” Coy said. “And those who have given the ultimate sacrifice for our great nation."

• At Long Beach City Cemetery, members of American Legion Post 1995 and Veterans of Foreign Wars members placed wreaths on the graves of the nearly 216 veterans buried at the cemetery. “It shows the local community that we still care for our brothers and sisters that have passed, that have made that sacrifice, to come out and say, ‘We remember you, we remember what you did for us,’” Post 1995 member Tina O’Shields said.

• In Katy, Jonathan D. Rozier American Legion Post 164 led the effort for the third annual local Wreaths Across America event. The post helped raised enough funds to place wreaths on approximately 445 veterans’ graves at Magnolia Cemetery. American Legion Department of Texas Division 2 Commander Bryan Coleman, the keynote speaker, said, “Symbolically, wreaths represent everlasting life. This seemingly simple evergreen is so much more than a decoration on a grave. Wreaths Across America exists because hundreds of thousands of people across the United States and abroad responded to the emotional power of these wreaths and their simple ability to honor military veterans and their families.”

• In Lukfin, American Legion Auxiliary Unit 113 conducted a WAA ceremony at the Garden of Memories Cemetery that placed wreaths on every veteran’s grave. “This program turned out phenomenally. It has been the best one that we have done so far and we have been doing it for a few years now,” Post 113 Commander Michelle Scuito told KTRE. “We have a huge veteran community in Angelina County. So, it should mean a lot to all of us that many of our community members went and served their country.”

In Sandston, American Legion Post 242 teamed up with Henrico County Police and other local first responders to place wreaths at Seven Pines National Cemetery. The public also helped place the wreaths, including the family of Col. Thomas Felts, a Sandston native killed by an IED in Baghdad in 2006.

“We are one nation and one flag,” Wiles said. “Many walks of life. The freedoms we enjoy today have not come without a price. Lying here before us and in cemeteries throughout the nation are men and women who gave their lives so that we could live in freedom and without fear. … The United States of America was founded on the ideals of freedom, justice and equality.”

In St. Lawrence, Allenton American Legion Post 483 joined with volunteers to place 287 wreaths on the graves of the veterans buried at eight area cemeteries.