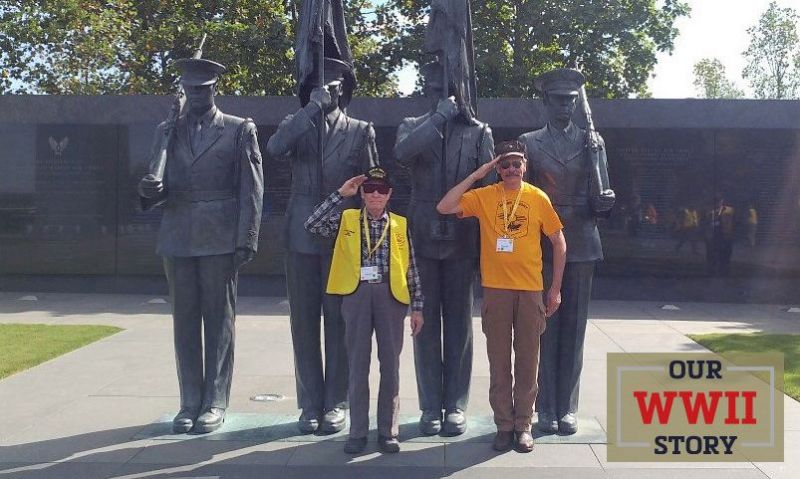 Given that The American Legion has emphasized honor and remembrance of past wars and those who fought them since its establishment in 1919, it’s only natural that veterans’ stories and memories are being collected all the time by posts and Legionnaires. And that tradition has led to a New Mexico post being ahead of the curve on the “Our WWII Story” American Legion initiative to mark the 75th anniversary of the end of the war.

David Morrison is the service officer at Allingham-Golding American Legion Post 18 in Silver City, N.M., and a local Disabled Veterans Outreach Program specialist, a job he took on in 2018 after retiring from the Air Force. He says of his job, “I have been actively engaged in advocating for the lack of veteran services to our rural and remote area of southwestern New Mexico.” Last October, he accompanied World War II veteran and fellow Post 18 member Randy Miller on the SW New Mexico Honor Flight to Washington, D.C. On the trip, they met Mario Kirker, another area World War II veteran.

At a roundtable event over the winter, Morrison learned about the Veterans History Project of the Library of Congress, and decided to interview Miller and Kirker on their war histories and preserve it for their families. He did the legwork for the interviews – preparing questions, taking notes – and then heard about a National Public Radio Story Corps recording event in Las Cruces, and plans changed. Morrison took Miller and Kirker to the event, for their memories to be preserved for the Library of Congress, and brought along a video camera. He began making complete Veterans History Project submissions for the two … and then COVID-19 hit. So he confined himself to making DVDs for the families.

Morrison has uploaded pieces to the Legiontown blog in the past, and when he saw the recent addition of the “My WWII Story” category, he decided to do the same with “the submission I made to honor these two wonderful friends of mine. Their service and friendship has been an inspiration to me.”

And so, Army medic Randy Miller and Navy gunner Mario Kirker have had their experiences immortalized both in the Library of Congress and on The American Legion’s platforms. Morrison plans to make use of the “Our WWII Story” media kit, which includes tips on how to conduct an interview and gather other histories, share the results and conduct anniversary events, as well as sample press releases, publicity graphics and more. His plans include events, as well as display cases at the post.

“We are a very small rural area,” he says, “but we have a very rich military service heritage and living community of surviving World War II, Korea and Vietnam veterans. I have a lot to do and am very honored to have the opportunity to try to do it for our veterans.”