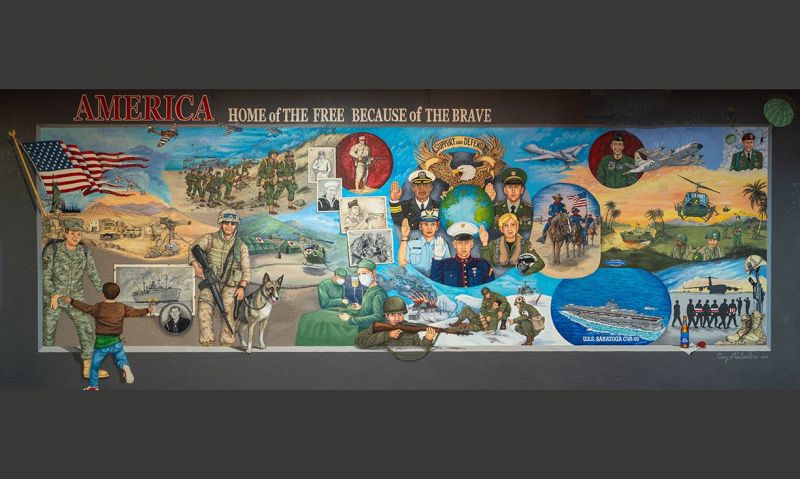 In 1965 at the young age of 9, Cary diValentin boarded a 28-foot boat at midnight with her parents, 2-year-old brother and 24 others. They were bound for freedom – leaving Cuba for America. Her first encounter on the rough seas was with the U.S. Coast Guard, who took the women and children by helicopter to Key West, Fla., while the men continued traveling by boat. It was in that moment that diValentin knew she wanted to repay the U.S. servicemembers who risked their life to give her freedom.

“We were really blessed to be in this country, and I felt always that I wanted to give back in some kind of way to the military and how grateful we were that because of them, we were able to come and enjoy the freedoms,” diValentin said. “I figured the best way for me to give back is through a mural painting. Which is what I know.”

diValentin and her family were part of 5,000 refugees who, during a short period of time, legally fled Cuba at Fidel Castro’s permission. Now, nearly 55 years later, she was afforded the opportunity to give back.

On her way back from work as a former scenic and mechanical figure artist for Disney World, diValentin would pass by American Legion Post 35 in Mount Dora and “wonder if they would want a mural someday.” That someday came last fall.

diValentin recently painted two murals inside Post 35 in Mount Dora, Fla. – a mural depicting veterans and scenes from all wars and one honoring women veterans.

Post 35 member Kathryn Wilgus put a call out on social media for a mural artist. “I wanted an inclusive, blended type of mural where we can see different wars, different people, different situations … but we are still one and the same,” Wilgus said.

Both murals are 8 feet by 25 feet, and took over 1,200 hours total. The veterans depicted on the murals are of real people – members of Post 35, family members and other well-known war heroes.

The focal point of the veteran and war mural is of five servicemembers representing the five branches. The Army soldier is Sgt. Joseph Lilly of Michigan who Wilgus, a retired Navy Nurse Corps lieutenant commander, provided medical aid to in Afghanistan but sadly passed from his injuries after stepping on an IED. diValentin initially sketched the mural with the servicemembers saluting until Wilgus said, “I think we need to have them do what every military person does first which is take the oath to serve their country.”

Features of the mural include the Buffalo Soldiers, Tuskegee Airmen, a Huey helicopter from the Vietnam War, exact replicas of military ribbons and medals, nurses, a priest and the USS Saratoga CVA-60. Legion Family members and locals would come by daily to see how the mural was progressing. A veteran and his wife came into Post 35 looking to join. When he saw the Saratoga ship, which he served on, he told diValentin that he joined the post because of her and said, “I have to now that my ship is here.”

“There are so many stories like that … ‘I flew that plane’ or ‘I was in that boat,’” she said. “They would tell you stories, and you would see it was like a healing thing. Tears would come down or they would choke up.

A few people who grace the mural include Wilgus’ twin sister, retired Army Col. Stephanie Gradford, who is embracing her 5-year-old son upon her return home from a tour in Iraq; former Post 35 Commander Donnie Williams in desert camouflage fatigues is at the top; and Korean War Army bugler Robert E. Nutter, the late father of Post 35’s bartender Sandy Friedman, also is pictured for her to say, “Hello, Daddy” when she walks into the post.

The veteran and war mural has been one of the most detailed murals diValentin has completed. It too is one that has the hardest scene she has ever painted – a paratrooper in the clouds.

diValentin’s son, Louis, was killed in a motorcycle accident six years ago. The U.S. Army 82nd Airborne Infantry veteran was 32.

Wilgus shared with diValentin that “if you can paint your son, we would love to have him on the wall. He is representing our paratroopers up in the clouds.”

Painting the mural and speaking with Legionnaires provided diValentin with an understanding that you don’t have to deploy overseas to be a hero as her son never had the chance due to a parachute training injury.

“Here’s this 18-year-old kid saying, ‘I want to go. I want to serve my country,’” she said. “For someone like me that came from another country, to have a child that has that love for his country, willing to give up his life for it. Of course he’s become a bigger hero to me. It’s really touching.”

When diValentin, who knew at age 3 she had artistic talent after drawing her cat freehand, now passes by American Legion Post 35, she thinks about the mural and how people “can feel it. That mural is alive. It makes you think wow these are heroes. These are real-life people who sacrificed and did this for us.”