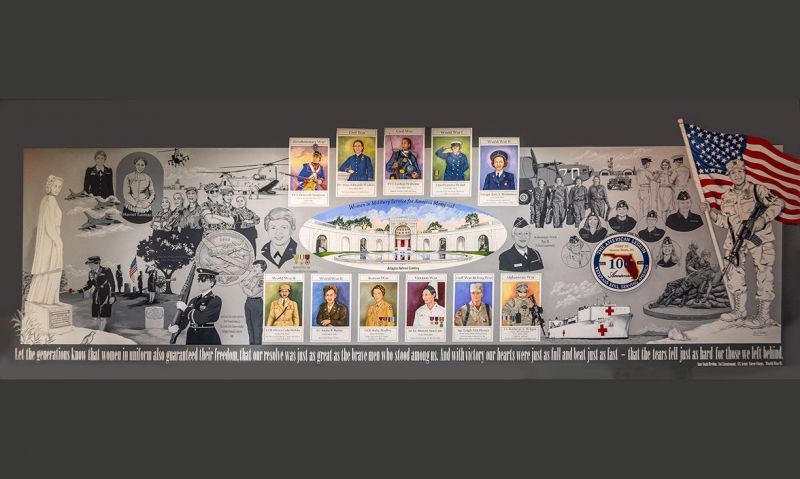 Post-9/11 combat veteran Kathryn Wilgus joined American Legion Post 35 in Mount Dora, Fla., three years ago because it was the first veterans service organization where “she had a voice.”

Prior to joining, Wilgus visited Post 35 as a member of the Combat Veterans Motorcycle Association in seeking donation support. A number was thrown out among post members but for one Legionnaire it wasn’t enough – she knew the post could do more and voiced that.

“That is why I joined The American Legion because of this one woman who had a voice,” Wilgus said. Vietnam War-era Air Force veteran Joan Kennedy is now on Post 35’s women veterans only mural because Wilgus told her “you are the reason why I’m here. You were heard.”

It took diValentin and her son, Tony, who assisted, 660 hours to complete. “The veterans mural I sketched as I went, except for the women’s mural as Kathryn had a vision,” diValentin said.

Wilgus said as women veterans “we are forgot about, we are disrespected, we are overlooked. And we are underestimated. Post 35 sees me as a woman veteran. So I felt the need for this mural and said I will commission it myself.

“There is a lot on the (mural) wall that just moves me.”

A few of the women highlighted in the mural include Civil War prisoner of war and surgeon Mary Edwards Walker, the only woman ever to receive the Medal of Honor; World War I Navy Chief Loretta Walsh, first woman to enlist in the Navy as a woman and not as a nurse; World War II Army Sgt. Donna-Mae Smith, first woman bugler; Korean War Col. Ruby Bradley, most decorated woman in military history; Vietnam War Army 1st Lt. Sharon Ann Lane was killed in action and her name is on the Vietnam Veterans Memorial in Washington, D.C.; Army Sgt. Heather Johnsen, first female guard at the Tomb of the Unknowns in Arlington National Cemetery; and Wilgus, a retired Navy Nurse Corps lieutenant commander, represents the Afghanistan War. A replica of the Nurse Memorial at Arlington National Cemetery, members of American Legion Post 35, military scenes and vehicles, and more also is highlighted in the mural.

At the bottom of the mural reads, “Let the generations know that women in uniform also guaranteed their freedom, that our resolve was just as great as the brave who stood among us. And with our victory our hearts were just as full and beat just as fast – that the tears fell just as hard for those we left behind.” – 1st Lt. Ann Sosh Brehm, World War II Army Nurse Corps

Post 35’s women veterans mural “represents our being,” Wilgus said. “Don’t ask us (if we are a veteran when wearing a military cap or shirt). Thank us.” The American Legion did just that for Wilgus. “The American Legion gave me a voice.”