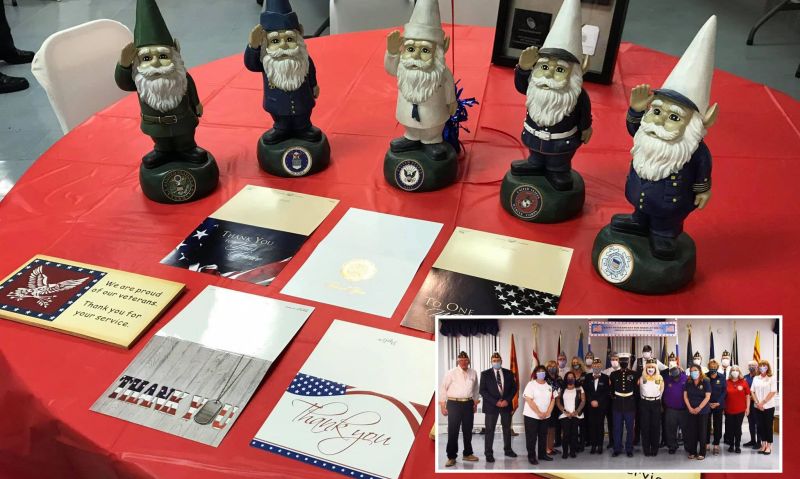 For more than seven years, The American Legion Family in Pennsylvania’s District 12 has taken to showing care and appreciation for the patients and residents at the Wilkes-Barre VA Medical Center as a collective responsibility. The district has provided holiday parties, entertainment, gifts and camaraderie – including during the coronavirus pandemic – though safety protocols have changed the way the Legion Family members show they care.

District 12 made sure those same veterans were remembered on the Fourth of July, and Veterans Day was no different. Unable to set up a celebration at the medical center like they normally do, the district’s American Legion Family members found an innovative way to honor the patients and residents.

Using Black Diamond American Legion Post 395 in Kingston, the Legion Family members put up balloons and decorations, just as they would typically do in the recreation room at the Wilkes-Barre VAMC. Those putting up decorations wore their American Legion Family uniforms and performed a small ceremony at Post 395 that was recorded and placed on multiple Facebook pages to share with the VAMC patients and staff. The ceremony also got local media coverage from multiple media outlets.

But that was just one part of District 12’s Veterans Day plan. Its members purchased $500 worth of VAMC canteen books for the patients to use for a Veterans Day bingo game, as well as 600 individual bags of potato chips, 30 boxes of Tastykakes, and 35 boxes of cookies, crackers and other snacks. The district also arranged for sandwiches and strawberry-filled cupcakes covered with red, white and blue icing for the patients, along with Veterans Day thank-you cards.

All of the items were safely dropped off at the VAMC for distribution by staff. District 12 Canteen Fund Representative Nicole Guest, a member of American Legion Post 350 in Nanticoke, said she received multiple texts from nurses and the facility’s recreation therapist “saying how our veterans were beyond excited all day.”

The Times Leader also covered District 12’s effort; Guest said she was going to buy multiple copies to share with VAMC patients “to see the write-up that will be all about how much we love them.”