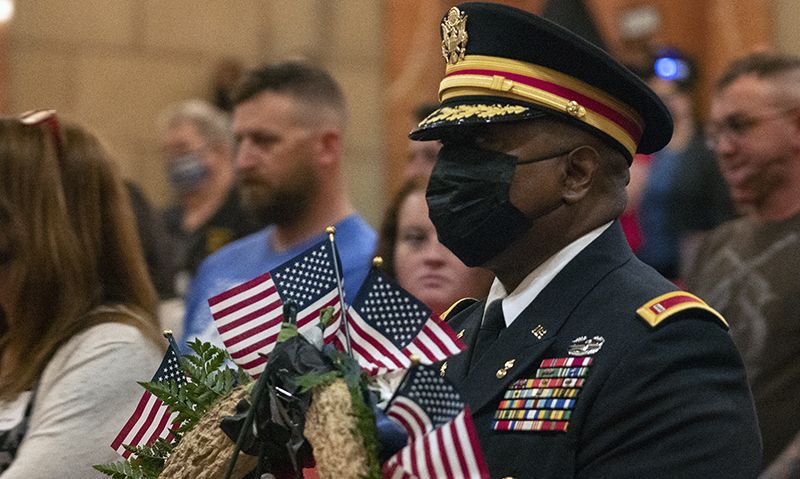 A member of the Military Department of Indiana Ceremonial Unit carries a wreath to the stage of Pershing Auditorium for placement with Gold Star Family members during The American Legion Memorial Service in Indianapolis on May 28, 2021.(Photo by Ben Mikesell/The American Legion)

Indianapolis has been known worldwide for over a century as the home of auto racing’s biggest event, the Indy 500.

Indiana Gov. Eric Holcomb wanted to remind those who attended Friday’s American Legion 500 Festival Memorial Service something more about the city, specifically its “long-lasting legacy of brave men and women who sacrificed all so that we could celebrate the ‘greatest spectacle in racing.’ It’s really the greatest spectacle of service … that we pause and get focused on the true meaning of this special weekend.”

The annual ceremony at the Indiana War Memorial returned with limited in-person capacity after COVID-19 restrictions turned it into a virtual event in 2020. Veterans, family members and other invitees wore crepe-paper poppies for Poppy Day on their lapels as they took seats inside Pershing Auditorium (the event was moved indoors due to weather) to hear speakers, honor families of the fallen and help advance the city into the post-COVID era.

“This is a very special weekend in Indianapolis, a city that is home to the world’s most famous auto race,” Bartlett told the crowd. “But that is not why we are gathered here today. A race may symbolize American freedom and prosperity, but we are here for a much higher purpose. It is to honor those who have given everything to make freedom, prosperity and the American way of life possible. Let your presence here be your tribute to the true meaning of Memorial Day.”

Brig. Gen. Dale Lyles, adjutant general for the Indiana National Guard, told the audience how the term “great” is often misused. “Whether the servicemember perished in a time of war, training for war or serving in peacetime, we will always remember them and their families,” he said. “We loosely use the adjective ‘great’ and somewhat indiscriminately apply it to the term ‘great American.’ Perhaps we need to see the term ‘great American’ as more myopic and focused … one that decrees greatness not to those who seek to gain for themselves. Rather, the term ‘great American’ should be reserved for men and women of a different character, character with a genuine and, some would even say, divine-like drive to serve their fellow mankind. The men and women who gave their lives in service of this country, and their families, are all indeed great Americans. As we go about our daily tasks and do what must be done, we gain our strength through them.”

Indianapolis Mayor Joseph Hogsett expanded on the city’s reputation for military respect and how the race elevates awareness of it. “Our city, our capital, has never been shy about our appreciation for those who have served,” he said. “Whether strolling through Military Park, gazing up at the Soldiers and Sailors Monument or paying our respects at Crown Hill Cemetery, we see tributes across all of our neighborhoods. And, of course, Indianapolis is the long-serving home for The American Legion Headquarters — the nation’s largest veterans service organization.

“And that is why I am so grateful that the 500 Festival chooses to continue this annual tradition, by reminding us of the true meaning of the Memorial Day holiday.”

The memorial service and the race stand as a threshold  to a new beginning in Indiana, the mayor suggested, noting that the weekend’s bigger meaning stands as a timely reminder for residents “that will no doubt strengthen their resolve in the face of all present-day challenges. To be certain, our community has faced a tumultuous year, a year of great loss. But we are transitioning now into the new era, the next era, an era in which we have come to appreciate anew the freedoms that all heroes fought so hard to secure. So, amidst historic celebrations, like the return of the Indianapolis 500, we pause to remember the servicemen and the servicewomen who died to make these celebrations possible.”

Friday’s American Legion 500 Festival Memorial Service was streamed live online by WISH-TV and was set to be aired twice on Monday, Memorial Day.