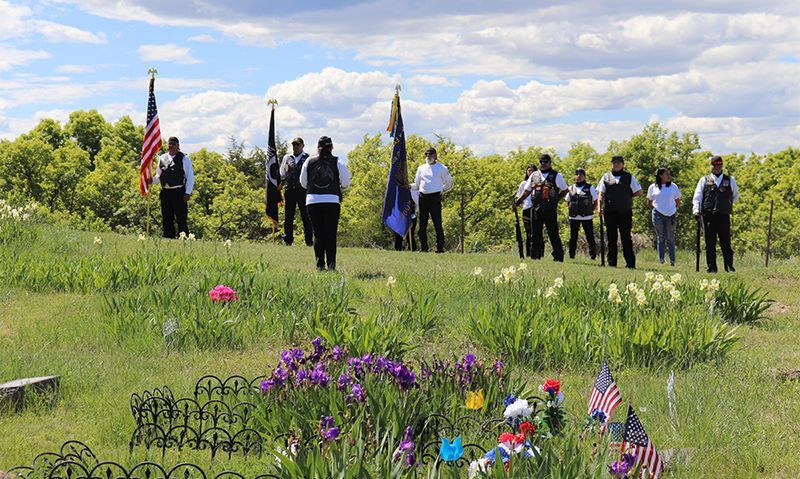 Since the early 1920s at Chauncey Eagle Horn/Philip Iyotte American Legion Post 125 on the Rosebud Indian Reservation in South Dakota, Memorial Day has been more than a ceremony.

It started with six cemeteries at a time when members of the post had to travel by horse-drawn wagon. The current version for members of Post 125 is a day-long event, spanning 158 miles, more than nine hours and nearly two dozen area cemeteries. Members of the post – and in the past few years escorted by American Legion Riders Chapter 125 – have provided Memorial Day honors to the veterans buried at 22 cemeteries located throughout the Rosebud Indian Reservation. Many of the cemeteries can only be accessed via dirt paths, but that doesn’t stop the Legionnaires.

Post 125 Commander Carole Gregg believes the tradition spans 101 years and continues to happen each year because of the value those on the reservation place on those who have performed military service.

“A lot of people are so proud of their veterans around here,” Gregg said. “When it comes to Memorial Day and remembering these people that passed on, I think it becomes a big deal around here.”

Often times there are family members waiting for the Legion entourage to arrive at the cemetery. “It makes us feel good to bring a little comfort that somebody remembers. A lot of people, after years have gone by, people forget. Families move away and don’t come around. We’re there to remember them.”

The Memorial Day trek across the Rosebud Reservation wasn’t the only weekend activity for Post 125, which topped the Department of South Dakota in membership increase in 2021. On Sunday, members of the post traveled to Wamblee, S.D., to assist Post 269 in providing honors at four cemeteries on the Pine Ridge Indian Reservation. “I thought that was humbling and honoring they wanted us to help with that,” Gregg said.

The following are a few examples of how American Legion Family members helped observe Memorial Day in their communities. If your post, district or department conducted an observance, please share your story and photos with us at www.legiontown.org.

At Woodland Cemetery, American Legion Yolo Post 77 placed around 2,000 U.S. flags on veterans’ gravesites, as well as created a hall of flags at the cemetery. Around 100 people attended the post’s ceremony at the cemetery, where guest speaker Will Anderson said it’s a responsibility of those living to remember the fallen.

“Our lives on this earth are fleeting in the grand scheme of things, but our memories can live far beyond our own time on this earth,” Anderson said. “But only if those who come after us take the time to reflect and remember.”

· In Glenwood Springs, American Legion Post 83 continued its tradition of placing flags on the hundreds of graves of veterans buried at Rosebud Cemetery and then hosted a ceremony on site. State dignitaries attended the ceremony, as did more than 200 members of the community.

· In Montrose, American Legion Post 73 conducted a ceremony at Valley Lawn Cemetery that was followed by Chapter 73 and Chapter 24 American Legion Riders staging a ride to raise awareness about veteran suicide.

In Panama City Beach, American Legion Post 402 teamed with Veterans of Foreign Wars Post 10555 to conduct a service at the veterans memorial at Aaron Bessant Park.

“It is an honor for me to pay tribute to those who have truly sacrificed their lives,” Post 402 Commander Bob Hoffman told MyPanhandle.com. “I had the opportunity in Vietnam to see some of the bodies being recovered, and I was here on the other end for the funeral. So that stuff means a lot.”

In North Augusta, American Legion Jesse C. Lynch Memorial Post 71 organized a ceremony that included Vietnam veteran Dennis DuPuis as the keynote speaker. DuPuis is a retired chief warrant officer who was awarded the Distinguished Flying Cross three times, a Bronze Star and a Vietnam Cross of Gallantry during his service.

"A lot of times, now, you see people going to a lake, barbecuing, going to the beach … and that's alright," DuPuis said. "I don't think it should be a mournful day. I think if these guys and gals … could see us and know that we remember them on Memorial Day, they will be happy to see us go to a lake and enjoy our families do what they would have, to do what they could have if they had not made this great sacrifice."

The ceremony also included a reading of the names of Post 71 members who’d passed away in the past two years. "We're a tight-knit family and it hits hard," Post 71 Commander Kevin Joy said.

“It’s wonderful,” Post 261 Commander Gary Seng told NWTimes.com. “I can’t express what he has done to enhance the post the way he has.”

Indianola American Legion Post 165 conducted a service at the IOOF Cemetery that included raising the U.S. flag and the playing of taps.

“These people obviously have a feeling of loyalty for their country, and hopefully this enhanced that,” Post 165’s Joe Moody told KNIA News. “Today, especially the way things are and the way the country is divided, something like this hopefully will bring out citizenry together with a common sense of community and patriotism. I think that is important.”

“My dad went to Vietnam, and he never made it back (alive),” Chapter 328 Director Edward Perot said. “So I really pay a lot of homage to what we do here.”

In Bay St. Louis, American Legion Post 139’s Memorial Day event included flag raisings and the reading of names of members of the post who have passed away.

“This kind of thing helps us not to forget what Memorial Day is really about and that people need to come together,” event attendee Annie Leiby told WLOX.

Members of American Legion Post 13 started what they plan on making a Memorial Day tradition: conducting an internment ceremony for the cremains of three unclaimed veterans. The veterans – Jimmy Bryant, Thomas Brunson and Jimmy Smart – were laid to rest at Mount Hope Cemetery in Webb City.

“What is important to us is a post that gives last respect to our fallen brothers and make sure that they’re interned correctly,” Post 13 Vice Commander Patrick Tuttle told KSN.

· At Westlawn Cemetery, American Legion Post 36 conducted a ceremony attended by dozens of people. Included in the ceremony was the reading of letters written by Gering Public Schools students to servicemembers and veterans. “It goes to show that our youngsters, the younger generations, they are very well aware of what our service people have done,” Post 36 Commander Kent Holmes told the Star-Herald, adding that, “This day cannot ever be forgotten. It’s those servicemembers – they earned this date for their respect and their memory. Do not forget them.”

· In Norfolk, American Legion Post 16 hosted a ceremony and also created both a field a flags honoring every fallen servicemember in Nebraska since 9/11, and an avenue of flags representing all 50 states and all U.S. territories honoring veterans. The field of flags was the idea of Thomas Landkamer, the Sons of The American Legion Detachment of Nebraska sergeant-at-arms who told KTIV, “It makes me feel good because I love seeing the American flag fly proudly and it's just a good reminder of the price that was paid for our freedom.”

In Ocean City, American Legion Post 524 teamed with VFW Post 6650 for a ceremony attended by hundreds that included the reading of names of fallen servicemembers and ringing of a bell to honor them.

“Remember, today is about veterans who are not here. This is a solemn day,” Post Commander Bob Marzulli said during the ceremony. “When you see a veteran today, thank them for their service.”

In Cassadaga, American Legion Post 1280’s honor guard conducted ceremonies at 10 area cemeteries to honor the veterans buried there. At each stop, Past Post Commander Bruce Kaus read to those attending the importance of the service; each ceremony also included a 21-gun salute.

· In Poland, Mahoning Valley American Legion Post 15 conducted a ceremony at the post before leading another one at City Park. The post read the names of members who’d passed away since Memorial Day 2020.

· In addition to hosting a ceremony at its facility, Claysburg American Legion Post 522 members also visited seven area cemeteries for salutes by the its honor guard and music by the post’s band.

· In Bryan, Earl Graham Post 159 hosted an outdoor ceremony that included the presentation of the POW/MIA table, the reading of the names of Post 159 members who died in the past year, the playing of taps and “Amazing Grace” and a rifle volley. “It is not a celebration; it is a ceremony,” Post Commander Tom Marty told The Eagle. “We are honoring the war dead, and those that gave up their lives in service of their country. A lot of times, people these days lose that concept and think of it as a mattress sale, a light sale or a car sale or something, and it really loses the true meaning of Memorial Day.”

In Park City, American Legion Post 14 organized a walk down Main Street to commemorate the day. Those on the walk stopped by restaurants along the way to share their stories of family and friends who died in service to their country.

A group of about 20 people made their way down Main Street Monday afternoon, stopping by restaurants to share stories about friends and family, who died while serving in the military.

Post 14 Adjutant Glenn Wright told KPCW that by walking along Main Street they were able to give people an idea about what Memorial Day means for veterans. "For me personally, Memorial Day is not a happy holiday," he said. "It's probably the most difficult holiday of the year for me. Because I have friends on the (Vietnam Veterans Memorial) wall. And I have friends who died as a result of other activities in the military."

· In Follansbee, Emrys Watkins American Legion Post 45 hosted a ceremony that also included the unveiling of a new fountain at the center of the post’s memorial site. The fountain is a stone replica of the Fallen Soldier Battlefield Cross designed by Richard Rist.

· In Parkersburg, American Legion Post 15 conducted multiple ceremonies, including two at its post and one at the city’s park. The post remembered its members who have passed away in the past two years, as well as other servicemembers. “We lost quite a few. Some of them to COVID, some of them … we’re losing a lot of World War II veterans. And then, we are still losing a lot of veterans every day to suicide – younger veterans. And so, we need to remember them. And we need to work for them,” Post 15 commander Marianne Bennett told WTAP.

Why did this happen at an

Why did this happen at an event held by Hudson American Legion Lee-Bishop Post 464? https://www.msn.com/en-us/news/us/veterans-mic-cut-when-he-speaks-of-black-peoples-role-in-memorial-day-creation/ar-AAKDZXm
Submitted by gwaktek : Jun 3, 2021 11:19am