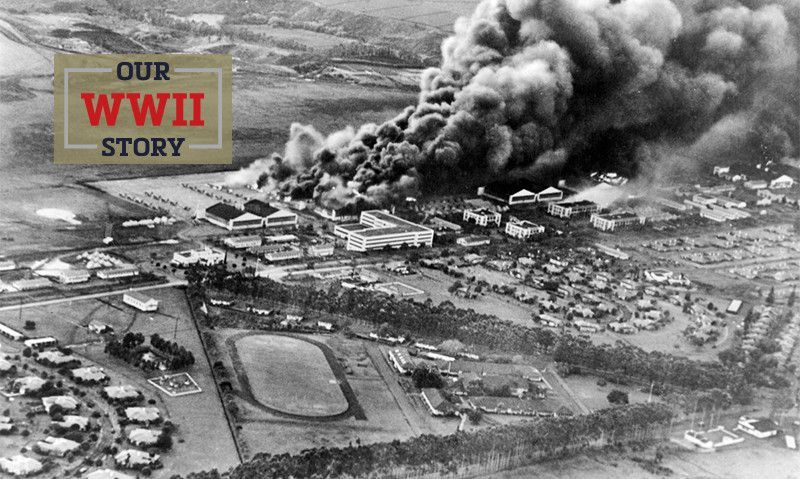 Marshall Nelson, a member of American Legion Post 308 in Tulsa, Okla., submitted his account of the Pearl Harbor attack in 1941. Hilmer Nelson was deputy base commander at Wheeler Army Airfield; Marshall later followed his father into what by then was the Air Force. On Dec. 7, he was almost 3.

“I only remember two things that day. I was on the floor looking up and saw a single-engine Japanese aircraft about 1,000 feet up. And being led into our pantry where a 10-watt dim bulb showed my grandmother, who was visiting from Seattle.

“My dad went outside after grabbing his pistol and saw a young soldier who he had drive him to Base Operations, about a mile away, while he looked for strafing enemy planes. He ran into the basement and had to shoot the lock off the door of a room holding two machine guns and ammo. They placed them on the roof and were able to fire at the second wave of about eight attacking planes that came in a line, strafing our lined-up fighter aircraft. They destroyed about a hundred of our planes. They were strafed once and fired back, but the guns were water-cooled and they didn’t have time to put the coolant in, so they could only fire off about six rounds and then had to wait a minute before they fired again. Otherwise, the barrels would have bent down from the heat of firing.

“Maj. Hilmer Nelson received a Silver Star for what would be his only direct fire on an enemy in World War II. In early 1944 he flew one bomb run at the German artillery on a hill above Anzio, Italy. His bomb wouldn’t release for 30 seconds on his dive, so he had to drop it in the Mediterranean Sea.

“I served 14 years as a regular officer in the Air Force.”