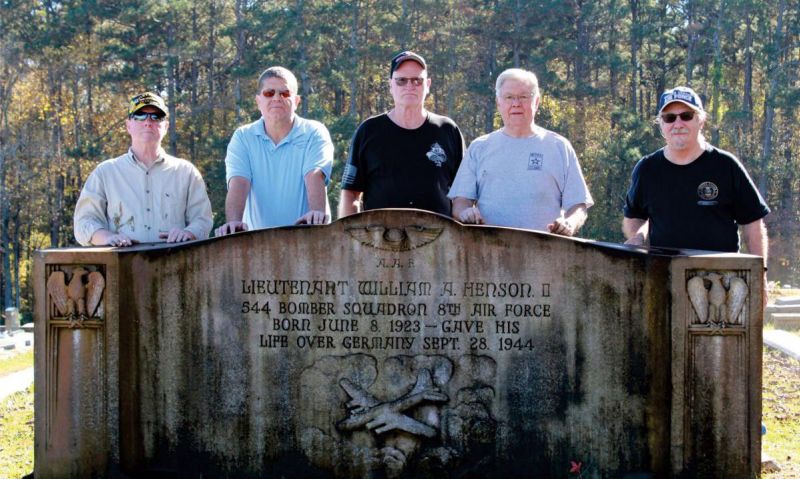 As part of celebrating The American Legion’s 100th birthday in 2019, members of Whitehurst-Ware American Legion Post 539 in New Bern, N.C., spent time cleaning the World War I monument located in front of the Craven County Courthouse. In doing so, they came to realize that the names of many soldiers – mainly Black soldiers – who died during the war were not featured on the monument.

Research by the post led to identifying the names of close to a dozen veterans, which were then added to the monument and led to a rededication ceremony by Post 539. But the effort led to the post’s next mission: the find out where those 12 Black veterans were buried. That took Post 539 members to New Bern’s Greenwood Cemetery, a predominantly Black cemetery established in 1882. There, the Legion Family members found dozens of veterans’ headstones covered in moss and mold, some vandalized, sunken, fallen over or lost amidst overgrown vegetation. A previous effort by the Daughters of the Revolution had discovered 41 veterans’ gravesites as well.

Post 539 again decided to right a wrong, spending a day last October marking each grave with a surveyor flag, photographing the gravesites and then cleaning each headstone. But that effort led Post 539 Finance Officer Mark Sandvigen – a member of the New Bern Historical Society and the vice president of the Craven County Veterans Council – and others to wonder something: who the people buried in those gravesites were. Not just names, but the lives they’ve lived.

So members of Post 539 and the Historical Society, along with other community members and organizations, have set out to learn what they can about those veterans, whose service to the nation spans from the Civil War to the Persian Gulf War.

“The Civil War veterans, these were all volunteer (U.S.) Colored Troops,” Sandvigen said. “We have a couple of guys who were escaped slaves, enlisted and then enlisted in the Army and came back to serve with the Union. That’s important, and people don’t know that.”

Other veterans buried in the cemetery fought in highly decorated units throughout other wars, often in segregated units. “And they did a hell of a job,” Sandvigen said. “They stood up and went.”

Sandvigen said the Black community has become involved in the project in helping learn more info about the veterans – specifically, Carol Becton, whose father was a Navy veteran and is buried at the cemetery. A member of the Historical Society, Carol told the New Bern Sun Journal she hopes others will step forward with information.

“I’m hoping that the older people that I know will recognize some of these names as well,” she said. “I hope this will stir something up in the African American community, that they will become more interested in this history and want to participate.”

Sandvigen said getting that perspective is critical to tell the complete story of those veterans. “I think that when you have white people telling a Black story in the history books, it’s got quite a bias to it,” he said. “Here’s living proof that bias is incorrect. There’s a different story here. This is a story of when the country called, they served. They didn’t shirk. They didn’t pretend it wasn’t their country. They all went.”

Sandvigen, Becton and others will be speakers at a Bern County Historical Society Lunch and Learn during Black History Month on Feb. 16. The program, “I, Too, Served America: The Stories of Greenwood Cemetery’s Veterans”, will provide biographical stories and photos of five Black veterans buried in Greenwood Cemetery.

“These veterans didn’t bury themselves,” Sandvigen said. “When their families buried them, they made sure they had a veteran headstone. That’s why I think this is important.”