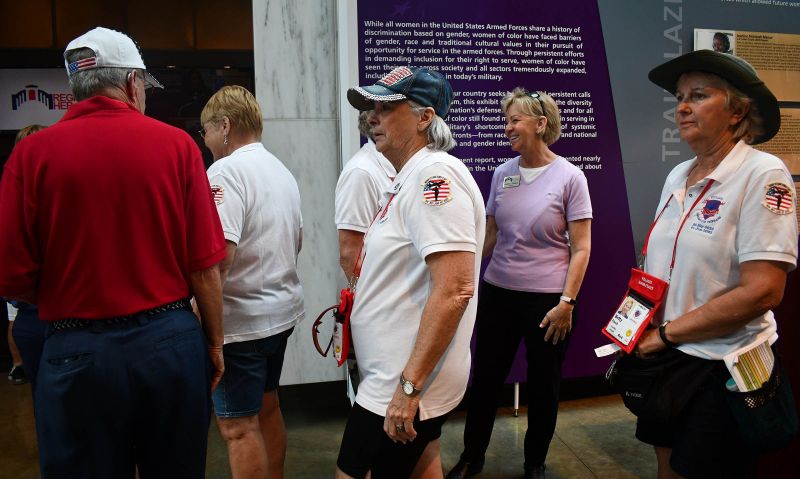 More than 100 women veterans from World War II through the Vietnam War comprised the first all-women Honor Flight from Florida, and just the second one overall.

The women toured the newly re-opened Military Women’s Memorial after it underwent six months of renovations at the gates of Arlington National Cemetery on June 1.

The memorial honors the service of the 3 million women who have served the nation beginning with the American Revolution. It serves as the only historical repository documenting the service of military women and features an education center, interactive exhibitions, a collection of military women’s stories and artifacts, and hosts programs and events for all generations.

For Vietnam era Navy veteran Joan Suelter, seeing the memorial and knowing what it stands for is remarkable.

“When I see the women of my era and the women of World War II, they are trailblazers and visionaries,” she said. “All we wanted to do was serve our country. To see a place where women have shined through all these years is absolutely incredible.”

Suelter is a history maker in her own right. She is the first woman commander of the largest American Legion post in the world, Post 347 in Lady Lake, Fla.

Her military service spanned from 1965 to 1968. During that time, women were largely taking over administrative jobs as the men deployed to Vietnam. Suelter wanted to follow in the footsteps of her father, who served in the Navy during World War II.

The first all-women’s Honor Flight took place last fall. Terry Campbell, one of the veterans on the trip, and Carol Lindamood Harlow, chief development and communications officer for Honor Flight, appeared on a recent episode of The American Legion Tango Alpha Lima podcast.

“It was an experience I will never forget,” says Campbell, a Vietnam-era Navy veteran. “I learned so much about the military, as well as women who stayed in for careers, women who had a broad spectrum of service.” (You can listen to the full episode here.)

Each generation of the military has had women trailblazers who have paved the road for the women who followed.

Deborah Sampson became a hero of the American Revolution when she disguised herself as a man and joined the Patriot forces. Tens of thousands of women served in both world wars, but legislation formally allowing women into the military wasn’t passed until 1948. It wasn’t until 1967 that women could be promoted to the ranks of admiral or general, thus able to command units.

In 2015, the Pentagon lifted the regulation barring women from serving in frontline, ground combat positions. And on June 1, 2022, Admiral Linda Fagan was sworn in as the 27th leader of the Coast Guard, becoming the first woman to lead a branch of the armed services.

“What the military has done for women, they can serve in combat roles and be Rangers,” Suelter said. “When I served, I wasn’t allowed on board the ship. To see these young women shine and step forward knowing the world is all theirs, if they want it, warms my heart and brings tears to my eyes.”

Phyllis Wilson, a 37-year Army veteran and president of the Military Women’s Memorial, told the veterans that one of the most important things they can do is share their stories.

“If you raised your right hand and said, ‘I will defend the Constitution,’ then your story should be in here,” she said. “Researchers use this to study the change over generations. We want the stories of our service to last beyond our lifetimes and long into the future.”

If you are a woman who served in the U.S. military, you can register your story for the Military Women’s Memorial by visiting womensmemorial.org/make-herstory/.