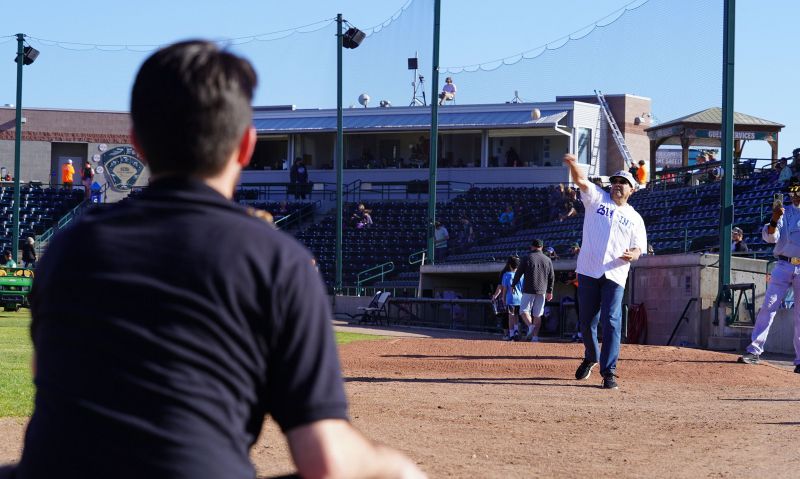 On what was a perfect night weather-wise, those in Missoula, Mont., to attend the Buffalo Soldiers Iron Riders Gathering were honored Wednesday at the Missoula Paddleheads baseball game.

Department of California Legionnaire Bobby McDonald, co-chair of the Gathering’s planning committee, threw out the first pitch. A video honoring the Buffalo Soldiers was shown on the big screen.

And there to witness it all was 23-year U.S. Army veteran Michael Theard, president of the Ninth and Tenth (Horse) Cavalry Association and a member of the American Legion Department of Maryland.

Theard was relaxed among his fellow veterans and Buffalo Soldiers reenactors, knowing they all share a common bond – to share the stories of the Buffalo Soldiers accomplishments. Or, as Theard said, to educate.

“I think it’s an awesome opportunity,” Theard said. “This is the reason why our association exists: to promote opportunities to commune with the locals wherever we are and share the legacy, history and achievements of the Buffalo Soldiers. Those guys served during some of the most exclusionary timeframes of the early development of this country. We have children throughout this country that are not aware of some of the challenges and the obstacles that these guys had to overcome.

“We go into schools, we go into federal assemblies, we go into faith-based organizations to share this story. But when it’s a young audience and you tell them about the history and their eyes light up. But then they get to a point where … ‘fine, what’s in it for me?’ That’s when I want to talk to them about the opportunities to conduct research about the things they like to do that can matriculate into careers that they enjoy. I believe using the accomplishments and achievements of (the Buffalo Soldiers) as a launching pad for that is a valued way to go. That’s my rationale for being here.”

Theard said he became truly interested in the Buffalo Soldiers one day after he retired from the Army when, while driving on the Beltway in Washington, D.C., when someone drove by him with Buffalo Soldier tags on his vehicle.

“I followed (him) and found out he was the past president of the Greater Washington, D.C., Chapter (of the Cavalry Association). We had the opportunity to speak, and the onion started getting peeled back on who the Buffalo Soldiers were (and) what their contributions were during westward expansion.

“In community college, a four-year institution and even graduate school, none of that information had I been exposed to. Now I don’t want the obscure segments of American history and Western expansion to ultimately disappear because they’re not being shared.”

Earlier in the day, attendees heard presentations on various segregated military regiments: the 24th and 25th Infantry Regiments, and the 100th Infantry Battalion, 442nd Regimental Combat Team and the Military Intelligence Service – all three made up of Japanese immigrants’ sons and daughters born, raised and educated in the United States.

Darrel Nash, a 26-year U.S. military veteran and retired Washington State Trooper, delivered information on the 24th and 25th Infantry Regiments based in the Western United States. A Buffalo Soldier reenactor and historian with the 24th Infantry Regiment Association, Nash shared the history of the regiments’ beginnings, their critical roles in World War II and some impressive sports accomplishments.

After previous deployments in the Pacific Theater of Operations, the 24th went to Saipan and Tinian in late 1944 to deal with the remaining Japanese forces that had yet to surrender. From there, the regiment was sent to the Kerama Islands off of Okinawa to force and then accept the surrender of the first Japanese Imperial Army garrison to surrender.

“They were happy to go (into combat). They had been at Fort Benning since 1922,” Nash said. “They were so effective on Saipan that they received a letter of commendation from the area commander … and were given Combat Infantry Badges. And not only that, they were authorized to get the campaign ribbon that goes with it.”

The 25th saw combat in Bougainville against Japanese forces and again saw combat on Morotai Island in 1945. Nash said that while on Morotai the 25th was responsible for the capture of Japanese Col. Kisou Ouchi, one of the highest-ranking Japanese officers captured during the war.

Nash added that the 25th sent the most baseball players to the Negro leagues, as well as that from 1917 to 1950, the 24th produced the most U.S. military boxing champions in history.

“It’s American history. All of our kids need to know this,” Nash said. “It’s my job to share this information.”

“Abraham Lincoln once said a race which has no knowledge of its history is not worth remembering,” Walker said. “This is why we do this. What Darrel and the rest of us do here wearing the title of Buffalo Soldier is … there’s a history out there that needs to be shown to the people. There’s a lot out there to learn.”

The Nisei were the subject of retired U.S. Air Force Lt. Col. Michael Yaguchi presentation. Following the attack on Pearl Harbor, Japanese immigrants across the nation were forcibly interned through Executive Order 9066; Yaguchi’s mother and other relatives were among them. As the Japanese military took control early in the Pacific Theater of Operations, the U.S. military looked to the Nisei to volunteer to serve in segregated units, as well as in intelligence.

The formation of the units resulted in the formation of the 100th Infantry Battalion and the 442nd Regimental Combat Team. The two units combined to earn 21 Medals of Honor, 29 Distinguished Service Crosses, 560 Silver Stars, 4,000 Bronze Stars and 9,486 Purple Hearts. The unit itself received seven Presidential Unit Citations and two Meritorious Service Unit Commendations. One of the Medal of Honor recipients was former President Pro Tempore of the U.S. Senate Daniel Inouye – third in line in the presidential succession.

The 442nd remains today the most decorated unit for its size and length of service in U.S. military history. “But there likely wouldn’t have been the 442 without the valor of the 100th,” said Yaguchi, commander of the Seattle-based Nisei Veterans Committee and a member of the Department of Veterans Affairs’ Advisory Committee on Minority Veterans. “Because of their actions … they said, ‘let’s start thinking about creating another segregated unit.’”

The 442nd came to Italy in June of 1944 and fought alongside the 100th before absorbing its predecessor. By September, the 442nd was participating in the invasion of Southern France and would later fight with the 92nd Infantry Division – another Black segregated unit – in chasing German forces out of Northern Italy.

“It was about 18 months of combat … some of the most fiercest fighting in Europe,” Yaguchi said. “It was a chance to prove their loyalty. It really is an American story. It’s about how you were treated badly by your country, but boy, your country really needed you to fight. And fight they did.”