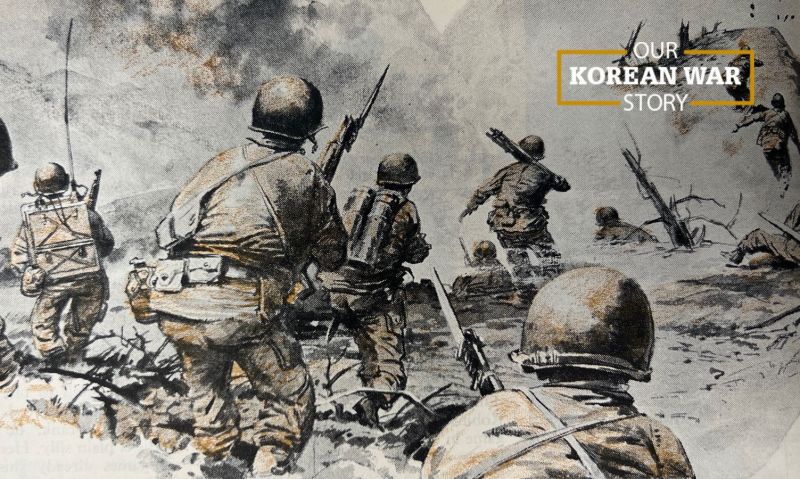 Too young for World War I and too old for World War II, Hamilton Greene made his mark in the annals of military history as an illustrator/correspondent. He covered both World War II and the Korean War for The American Legion Magazine, as well as other top publications of the time, including Adventure, True and Argosy.

A two-page spread of his eye-witness artwork from the Korean War appeared in the April 1952 American Legion Magazine under the title, “This I Saw.”

Greene had just returned from a year and a half with combat troops “in those god-awful hills” and presented seven sketches “which will stick in my visual memory for the greatest length of time.”

His illustrations, mostly from the summer and fall of 1951, depict the “roughest hand-to-hand fighting in my experience” from the 7th Regiment battle for Hill 717; the death of soldier who was struck by a piece from a bulldozer blade in a minesweeping operation; and “most bitterly tragic was death of medic who with great difficulty had carried bad-leg casualty off hill 347. While giving transfusion, single long range mortar shell killed medic and blew off casualty’s remaining leg.”

A native Bostonian, Greene moved to Chicago and became a jazz musician for a time while driving a taxi by day. As a drummer, he traveled the world and on one tour to London, he left the band and resumed his art studies. He moved to New York in the mid-1930s and drew pen-and-ink illustrations for pulp books and magazines, but his status grew during World War II as a correspondent and combat artist for The American Legion Magazine and King Features Syndicate.

In 1944, traveling with the 9th Army through Europe, he was severely wounded by machine-gun fire. He later went to the Pacific Theater and was at the surrender of Japan on Sept. 2, 1945, on the USS Missouri in Tokyo Bay.

After the war, he worked from his home in Vermont, illustrating books and magazines. He returned to combat art during the Korean War, his last stint as a field correspondent. Much of his later work included illustrations for Golden Press books for young readers.