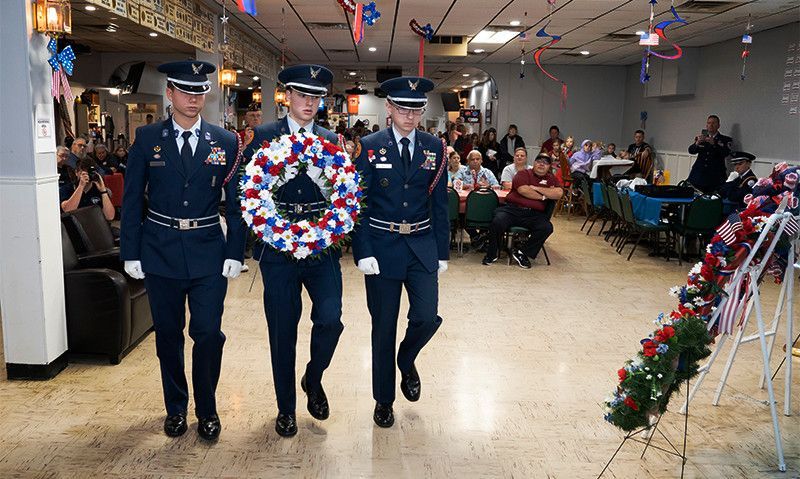 Between 150 to 200 veterans, community members and local schoolchildren packed inside the post for the joint ceremony of The American Legion and Veterans of Foreign Wars Post 3522. While the rain continued into the afternoon, most of those who attended the ceremony were then treated to a soup and sandwich lunch.

During his opening remarks Vietnam War Marine Corps veteran George Goletz said the rain outside could represent the tears shed for area veterans lost during the past year before sharing the story of the origin of Veterans Day.

Richard Martinez, a Navy corpsman who retired in 2017 after 20 years of military service, was the ceremony’s guest speaker. He stressed that while veterans pray for peace, they understand the need for war.

“It is us veterans, especially the wounded and the caregivers, who pray for peace most of all,” Martinez said. “These individuals and families … understand that from time to time, the tree of liberty must be watered.

“It is the veteran that is the living time capsule of this knowledge and this experience. We understand the need of shared sacrifice.”

Martinez praised those currently serving in the military or who have recently left – especially those who joined following 9/11. “I joined the Navy in 1997. It was a world of relative peace,” he said. “These kids, now military leaders and veterans themselves, joined after horrific gruesome attacks to our nation. They joined knowing they’d be put in harm’s way.

“Some say there are problems with the youth of today. Those same people – my gals and my guys in fighting holes at 3 o’clock in the morning – rest assured, like the Americans who have gone before them, that they have the watch. We are in good hands.”

Members of Wright Denny Intermediate School K-Kids, a Kiwanis youth organization, were at the ceremony to pass out thank-you cards to veterans and then help serve lunch. Also at the ceremony were students from the Jefferson High School JROTC program.

“That’s what I like to see: all of those young people here,” Post 71 Second Vice Commander Joe Malcolm said. “And that’s what we’re trying to do here at the post. We want to be known as a place for families to go.”