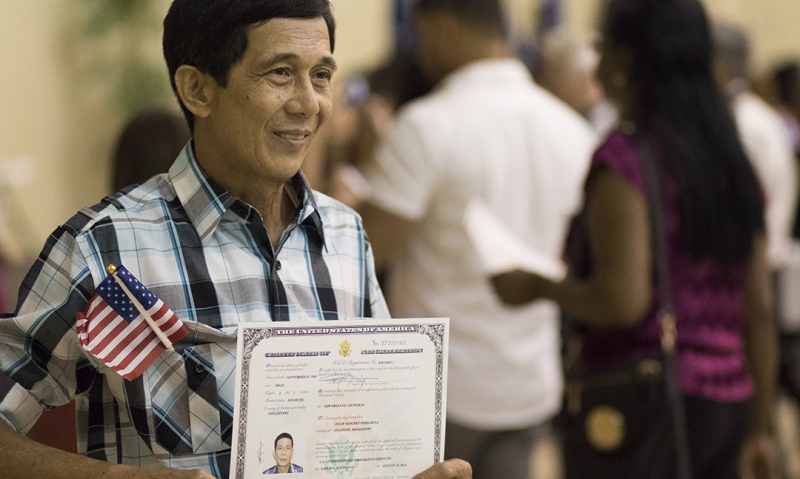 One of the positive side effects of the broad debate surrounding immigration – and the more narrow debate triggered by President Donald Trump’s executive order temporarily suspending admission to the United States of immigrants from countries “identified as presenting heightened concerns about terrorism” – is the renewed focus on the important contribution immigrants make in our nation’s defense.

Since late 2001 (when a new naturalization process for immigrant service-members was put in place by President George W. Bush), 109,321 U.S. troops have been naturalized, according to the most up-to-date statistics from U.S. Citizenship and Immigration Services (USCIS). More than 11,000 of those military personnel became citizens during naturalization ceremonies in war zones such as Afghanistan and Iraq; in hot spots such as Jordan and Libya; and in front-line posts such as Bahrain, Guantanamo Bay, Djibouti, Kenya, Korea, Kuwait, Qatar, Turkey and the United Arab Emirates. In 2009, for instance, in what a Marine Corps publication called “the largest naturalization ceremony held by the U.S. Citizenship and Immigration Services to date in Iraq,” 239 troops from 59 countries took the oath of citizenship.

Immigrant military personnel are eligible for naturalization if they have “served honorably in the U.S. Armed Forces for at least one year, obtained lawful permanent resident status and filed an application while still in the service or within six months of separation,” USCIS explains.

However, as the Legion has reported, many immigrant military personnel and immigrant veterans “share the misconception that their service confers citizenship.” It does not. As immigration lawyer Elizabeth Ricci told the Legion in 2015, “The oath of allegiance for naturalization and the oath of enlistment have similar wording. So a lot of people get confused by that.”

Military service as a pathway to citizenship is not a new phenomenon. If anything, America’s military was more immigrant-dependent in the past than it is today.

Congress authorized the creation of a German battalion in 1776. A study conducted by researchers at the Naval Postgraduate School points out that 47 percent of Army enlistees were immigrants in the 1840s. Immigrants represented 22 percent of the Union Army during the Civil War.

By 1898, according to a study conducted by the Population Reference Bureau, fully 25 percent of the Army was foreign-born – at a time when about 15 percent of the U.S. population was foreign-born. The study adds that after the war with Spain, Congress created a Puerto Rican battalion. And during World War I, the commander of the 77th Infantry Division, which was manned by draftees from the New York area, claimed that 43 languages and dialects were used in his unit.

Between World War I and World War II, 80,000 military personnel were naturalized. During World War II, the U.S. military featured a Norwegian battalion and a Puerto Rican battalion. DoD notes that special agreements with the Philippines enabled more than 35,000 Filipinos to enlist in the Navy between 1952 and 1991.

Immigrants serving in the military make enormous sacrifices for the United States. For instance, more than 700 Medal of Honor recipients were immigrants – 20 percent of that hallowed fraternity.

All that said, policies promulgated in 2014 that allowed immigrants without proper documentation to join the military may have gone too far. Policymakers (and immigrants) should respect the law. If a person enters the United States illegally, after all, his first act in this country – indeed, the very method he chooses to enter this country – is to violate the laws of this country.

That’s not unforgiveable or unfixable. America is a land of second chances. However, as Legion materials focusing on immigration have emphasized, “The United States is a country of laws that establish our standards of behavior. Rewarding criminal behavior is not in the best interest of this country ... The American Legion is adamantly opposed to blanket policies of forgiveness.”

Thus, any pathway to citizenship should include some penalty for those who break the law by entering the country illegally – no matter how hard-working they are, no matter how sincere their desire to live the American dream, no matter how committed they might be to the United States.

Still, we should not overlook the many dividends derived from citizenship through military service. Perhaps the biggest is the fact that those who become Americans in this manner have truly earned their citizenship and will never take it for granted. According to Emilio Gonzalez, former head of USCIS, immigrants who volunteer to serve in the armed forces are “more easily integrated into our nation, foster a greater attachment to our national and political institutions, and are transformed into committed and loyal Americans.”

Gonzalez knows that the worst thing we can do is balkanize our military – or our country – into shards of ethnicity, origin and nationality. “The common bond that unites every soldier, sailor, airman and Marine is a commitment to duty, honor and country,” as Gonzalez – himself an Army veteran and naturalized citizen – has observed. “Whether native-born, naturalized or not yet U.S. citizens, service-members are unified not by common heritage, race, religion or creed, but rather by this universal code.”

His words call to mind something Gen. Norman Schwarzkopf said after the Gulf War: “When our blood was shed in the desert, it didn’t separate by race ... it did not separate according to national origin.”

In these days of deep division at home, immigrants serving around the world in the U.S. military remind us of that truth.