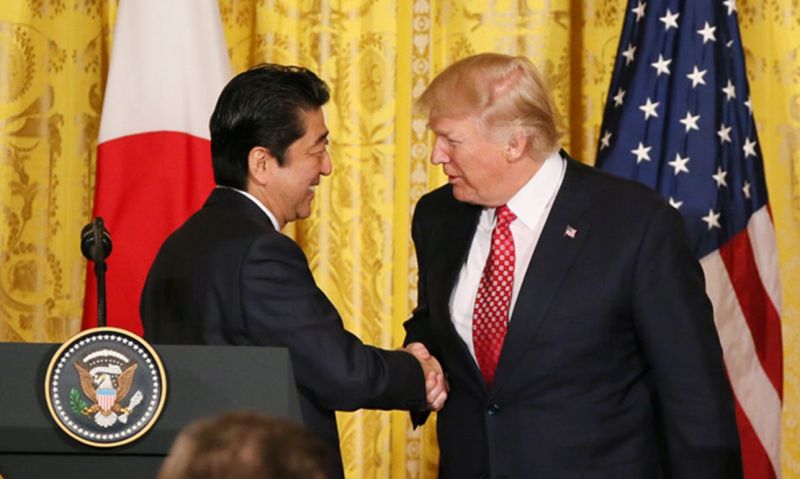 He’s popular at home, having won three national elections and having recently steered his party to a commanding 68-percent majority in parliament. He’s a strong advocate for free trade and free markets – principles he has leveraged to strengthen his country’s economy. And he’s hawkish on defense overseas, recognizing that the West must commit more than just words to defend the post-World War II order. For these reasons, Prime Minister Shinzo Abe has been called “Japan’s Reagan” – and understandably so. But given the actions and designs of the communist behemoth in his neighborhood, his resolute response and his burgeoning partnership with President Donald Trump, a more appropriate title might be “Japan’s Thatcher.”

Whatever we label him, Abe is a stalwart ally in an increasingly dangerous and chaotic world.

Before getting into how Abe is pulling his country back onto the world stage to play a key role alongside the United States, it’s important to explain why he has been forced to do so – and why his neighborhood is so dangerous. The answer can be found in three little letters: PRC.

China’s military spending has mushroomed 164 percent since 2008. On the strength of this spending binge, China will deploy 73 attack submarines, 58 frigates, 34 destroyers, five ballistic-missile submarines and two aircraft carriers by 2020. The Pentagon reports China deploys more than 2,800 warplanes and has a bristling missile arsenal with “the capability to attack large ships, including aircraft carriers, in the Western Pacific.”

PRC leader Xi Jinping offers an ominous exclamation point to these numbers: “We must insist on using battle-ready standards in undertaking combat preparations, constantly enhancing officers’ and troops’ thinking about serving in battle, and leading troops into battle, and training troops for battle.”

Moreover, China’s actions are not those of a friendly neighbor. The Japan Air Self Defense Forces scrambled warplanes more than 1,000 times in 2018 in response to incursions on Japanese airspace, with Chinese violations accounting for 61 percent of that total (Russia accounts for the rest).

A similar picture emerges with regard to Chinese encroachment on Japan’s territorial waters: According to a RAND study, “Since mid-2014, on average, Chinese government vessels have penetrated the territorial seas seven to nine times a month.”

As Abe bluntly puts it, China is trying to turn the East and South China Seas into “Lake Beijing.” And his response to Beijing’s buildup and belligerence serves as a reminder that the United States has a serious partner in the Pacific: “We will firmly defend the lives and property of Japanese people, as well as our territories, territorial waters and territorial air space.”

We should spend a moment on those last two items: With a wary eye on North Korea, Japan is a global leader in missile-defense development. The United States and Japan co-developed the SM-3 Block 2A interceptor missile. Japan hosts two powerful AN/TPY-2 missile-defense radars, which are networked with other U.S. missile-defense assets. And Japan deploys a fleet of six Aegis missile-defense warships (eight by 2020).

As to the F-35, Tokyo is in the process of acquiring 147 of the U.S.-built stealth fighter-bombers, including F-35B variants. In fact, more than a quarter of Tokyo’s F-35 buy – 42 airframes – will be F-35Bs. That’s important because the F-35B is capable of taking off from short-deck aircraft carriers, such as Japan’s so-called “helicopter carriers.” (The U.S. military calls them amphibious assault ships.) In response to Beijing, Tokyo has plans in the works to covert one or two of these massive warships into full-fledged aircraft carriers – thus enabling Japan to defend more effectively its vast island possessions and territorial waters from Chinese encroachment. Doubtless, Beijing will get the message.

Abe also has won public support for institutional reforms that are tilting Japan away from its postwar pacifism. In 2015, he persuaded parliament to approve a reinterpretation of the postwar constitution to allow Japan’s military to come to the defense of allies under attack (i.e. the United States). And he is urging parliament to codify in law what already exists in practice – namely, that the Japan Self Defense Forces (JSDF) are not just for territorial defense, but rather a bona fide military that “protects the peace and independence of Japan.”

A top Japanese diplomat says Japan is committed to “shouldering the burden of global defense and security.” And under Abe, Japan is doing just.

Abe is considered the father of the Quad – an ad hoc partnership enfolding the United States, Japan, Australia and India that may in the near future evolve into a full-blown alliance of Indo-Pacific democracies. During a recent series of summits, representatives from the four nations “committed to ensuring a ‘free and open’ region, with ‘enhanced connectivity,’ ‘respect for international law,’ and ‘the rules-based order in the Indo-Pacific,’” as Alyssa Ayres of the Council on Foreign Relations reports, citing various press statements from the four democracies.

As if to underscore Tokyo’s commitment to the Quad idea, Japan’s helicopter carriers have deployed to waters off the Indian coast for exercises with the U.S. and Indian navies, and Japan and Australia are “deepening” joint military training, in the words of former Australian Prime Minister Malcolm Turnbull. In fact, Japan and Australia are updating their defense partnership to reflect increased joint exercises and deployments in each country. Japanese troops and warships also have joined the United States, Britain and France for military exercises around Guam and Tinian.

While Beijing tries to militarize and annex the South and East China Seas piecemeal, Abe has envisioned linking the region’s waterways as “seas of freedom and of prosperity.” Yet just as highways need patrolmen and cities need policemen, international waterways need responsible nations to keep the peace and enforce some semblance of order. Toward that end, Japan is expanding its naval activity in the region by conducting joint patrols with the Navy and other democratic partners.

In addition, Japan is participating in maritime policing operations beyond the South and East China Seas, such as the Proliferation Security Initiative (which interdicts WMDs on the high seas) and the Combined Maritime Forces (which is a partnership of 31 nations that contribute naval and air assets, basing and/or personnel to operations focused on security in the Persian Gulf, counterterrorism and counterpiracy).

Add it all up, and it’s undeniable that Japan’s return to the international stage is promoting stability, buttressing a rules-based order and serving as a force multiplier for America’s overstretched military.

Japan, as Abe knows, is not alone.

With Beijing lunging at the Senkaku Islands, which sit between Taiwan and Japan’s home islands, Tokyo and Washington are “drawing up battleplans to enable their forces to fight together against any Chinese incursion,” Reuters reports. A recent exercise dubbed “Keen Sword” showcased U.S.-Japanese capabilities to defend island territories. In what Reuters calls the “biggest combined war games” involving Japan and the United States, Keen Sword featured USS Ronald Reagan and 57,000 soldiers, sailors, airmen and Marines from the U.S. and Japan.

The Japan Times adds that Pentagon-JSDF plans contemplate “such emergencies as armed Chinese fishermen landing on the islands, and Japan’s Self Defense Forces needing to be mobilized after the situation exceeds the capacity of the police to respond.” In addition, the two allies are exploring how they might secure vital passageways in the East China Sea by force.

America is not alone, either. Thanks to the reinterpretation of the postwar constitution (which, ironically, the United States drafted in order to demilitarize Imperial Japan), as well as Abe’s investment in a 21st-century military, Japan is postured to support the United States in contingencies throughout the Indo-Pacific region. And thanks to perhaps the closest relationship Trump has with any world leader – journalist Matthew Continetti notes that Abe was the first foreign leader to meet with Trump, has met with Trump 10 times and talked with Trump by phone more than 30 times, and has joined Trump for 27 holes of golf – Abe, like Thatcher with both Reagan and the elder Bush, will be key to helping Washington weather future international crises.