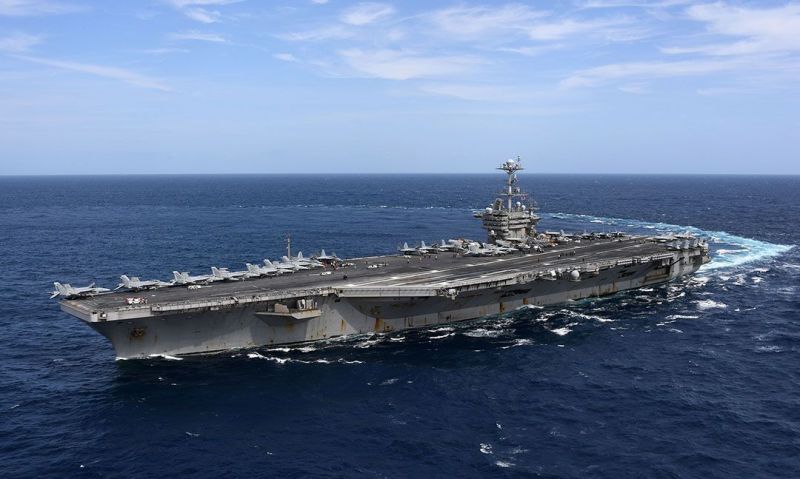 We seldom take time to think about it, but our nation and our world rely on the oceans to connect us, power us, feed us and supply us.

Consider that 53 percent of U.S. imports and 38 percent of U.S. exports are transported by sea. Fully 90 percent of global trade, equaling some $14 trillion annually, travels by sea. It doesn’t happen by accident or by magic. The burden of keeping the sea lanes open – discouraging encroachment, deterring bad actors, fighting piracy, clearing vital waterways and chokepoints – falls largely on the U.S. Navy. However, the Navy doesn’t have enough ships to do everything we need it to do.

As a trading nation and a coastal nation, America was destined to be a maritime power.

The United States has been fighting for free and open seas almost from the beginning of the Republic: To secure and maintain access to markets in the Mediterranean, President Jefferson launched a war against piracy halfway around the world, famously concluding, “It will be more easy to raise ships and men to fight these pirates into reason, than money to bribe them.” As America entered World War I, President Wilson called for “absolute freedom of navigation upon the seas.” During World War II, President Roosevelt and Prime Minister Churchill envisioned a postwar peace allowing “all men to traverse the high seas and oceans without hindrance.” FDR bluntly described “freedom of the seas” as an “American policy.” Just as we need police to maintain order on highways and city streets so that we can travel about freely, the oceans need to be policed so that nations can trade and interact freely. Toward that end, in a recent 12-month span the Navy directly challenged 40 illegal maritime claims made by 26 countries.

China is at the top of that list. Claiming 90 percent of the South China Sea based on a map drawn by Chinese cartographers in 1947, China is turning reefs hundreds of miles outside its territorial waters into military outposts. Since 2014, Beijing has constructed 3,200 acres of illegal islands in international waters, deploying SAM batteries, anti-ship missiles, military-grade runways and radar systems on some of these “instant islands.”

As it tries to annex the South China Sea piecemeal, China continues a massive military expansion: a 170-percent increase in military spending the past decade, a 210-percent spike since 2000. The payoff: China bristles with hundreds of anti-ship and anti-aircraft missiles, deploys a high-tech air force, and boasts a 335-ship navy. (For the sake of comparison, the U.S. Seventh Fleet, which is tasked with operations in the Pacific Ocean and part of the Indian Ocean, deploys 50 warships.) China’s navy is 55-percent larger than it was in 2005. Beijing added 24 warships to its fleet in 2019, 21 in 2018, 14 in 2017. Russia claims half the Arctic Circle and the entire North Pole. Like Beijing, Moscow has underlined its claims in a brazen military context: Russia has stood up six new bases north of the Arctic Circle, opened/reopened 16 ports and 13 airfields in the region, and deployed sophisticated surface-to-air missile batteries in the Arctic. In addition, the Russian navy has annexed the Sea of Azov and is surging into the Mediterranean, thanks to a new/old strategic base on the Syrian coast.

“We, as a Navy, as a nation, have not had to confront such peer competitors since the Cold War ended nearly three decades ago,” explains Adm. Chris Grady, Fleet Forces commander. “Our sea control and our power projection, two vital elements of our national security, are being challenged by resurgent foreign powers, namely Russia and China.”

All of this helps explain why the president and Congress codified into law plans to deploy a 355-ship Navy. At the height of President Reagan’s rebuild, the Navy boasted 594 ships. While today’s Navy may be more ambidextrous than the Cold War-era Navy, keeping the sea lanes open is about presence. At just 296 ships, today’s Navy lacks the assets to be present in all the places it’s needed.

“For us to meet what combatant commanders request,” according to former Chief of Naval Operations Adm. Jonathan Greenert, “we need a Navy of 450 ships.” A government-funded study concludes that the United States needs 14 aircraft carriers (the Navy has 10 active), 160 cruisers and destroyers (the Navy has 84), and 72 attack submarines (the Navy has 52). These gaps have real-world implications: When Tehran threatened to close the Strait of Hormuz during the Obama administration, CENTCOM requested an extra aircraft carrier to send a strong deterrent signal. That request was denied because the carrier was needed in the Pacific. When the Obama administration ordered warplanes from USS George H.W. Bush to blunt the ISIS blitzkrieg, Greenert admitted “they stopped their sorties” over Afghanistan to do so.

Similarly, the Trump administration’s sleight-of-hand with USS Carl Vinson during the North Korea crisis in 2017 – trying to make one carrier do the work of two – underscored that the United States doesn’t have the firepower it needs to dissuade foes and reassure allies. As Thomas Modly, who served as the Navy’s top civilian leader until recently, observes, we have “less than half of the Navy we had 30 years ago, but arguably three times the responsibility.”

If that’s the bad news, the worse news comes via recent reports that the United States may not be able to reach the 355-ship goal. The good news is that there are ways to increase America’s maritime strength. As the Congressional Budget Office (CBO) explains, these include building and buying more ships, which requires a much bigger budget (more on that below), delaying retirements of existing ships, and/or reactivating decommissioned ships. Navy experts argue that extending the service life of existing warships from 30 or 40 years to 50 years is exceedingly doable and reasonable. The same goes for reactivating mothballed ships. After all, they were mothballed (rather than scuttled) because someone had the good idea that they might be needed in the future. And here we are.

The CBO points out that the United States reactivated 50 destroyers before U.S. entry into World War II, hundreds of ships during the Korean War, USS New Jersey during the Vietnam War, and USS Iowa, USS Missouri, USS Wisconsin and USS New Jersey (re-reactivated) during the Reagan rebuild. To be sure, there is a cost to reactivating warships, but it’s a fraction of the cost of building new ones. More important, a reactivated warship can enter service in a fraction of the time it takes to build a new warship. Beyond life extensions and reactivations, a growing chorus is advocating a “ghost fleet” of unmanned warships. Unmanned systems are certainly part of the solution, though removing humans from the battlespace presents other dilemmas and problems. Modly suggests that unmanned warships could ultimately comprise more than 10 percent of the fleet.

There are other, more creative solutions policymakers could explore. Many Americans are unaware that the Army deploys 300 maritime vessels. A watchword in today’s Pentagon is “jointness” – the notion that all branches must work together across all domains to detect, deter, dissuade and defeat threats. Increased Army-Navy jointness and cooperation could enable a more dynamic use of the Army’s ocean-going assets, many of which are deployed and prepositioned around the world but largely tethered near land. Coast Guard cutters have been deployed to support freedom of navigation ops in the Taiwan Strait. Some military experts are proposing that Coast Guard cutters be retrofitted with anti-ship missiles (as they were in the 1980s).

"Multi-purposing” and “up-gunning” existing ships is a way to grow the fleet rapidly. Navy and Marine Corps officials propose bolting small naval strike missile pods onto the decks of littoral combat ships and even just “parking a HIMARS missile-launcher truck” on the topsides of unarmed vessels, as Breaking Defense reports. In fact, Army units and Marine units are testing elements of the concept.

Another idea filed under “creative solutions” is the Lightning Carrier concept, which turns amphibious assault ships into mini-aircraft carriers by loading them with 13 or as many as 20 F-35Bs (known by the nickname “Lighting II”). This concept, which increases America’s carrier capabilities and power-projection capabilities, is already being tested at sea. Recent months have seen USS America deploy to the Pacific and USS Wasp to the South China Sea as Lightning Carriers.

Although they can’t do everything a full-fledged supercarrier can do, Lighting Carriers could provide nine extra platforms for deploying fixed-wing stealth fighter-bombers – without any need for permission from a host nation. This would almost double the U.S. flat-top fleet and make for an effective deterrent. As one Navy official put it, the Lightning Carrier can “sting” the enemy.

Finally, we could broaden our definition of what constitutes the fleet. Adm. Mike Mullen promoted the “thousand-ship navy” concept during his tenure as chairman of the Joint Chiefs of Staff. “The United States Navy cannot, by itself, preserve the freedom and security of the entire maritime domain,” he explained. “It must count on assistance from like-minded nations interested in using the sea for lawful purposes ... I envision a 1,000-ship navy – a fleet-in-being, if you will, made up of the best capabilities of all freedom-loving navies of the world.”

In fact, this navy of navies – enfolding the combined seapower of the United States and allies in NATO, Japan, Australia, South Korea and India – is policing the seas and promoting maritime security via the Proliferation Security Initiative, the Combined Maritime Forces, and ongoing freedom of navigation operations in the South China Sea, Black Sea and Mediterranean Sea.

Arguably, the best pathway to a bigger Navy is a bigger defense budget. Navy leaders say they need $120 billion in extra funding over the next decade to reach 355 ships. But those resources don’t appear to be forthcoming, especially as we grapple with the enormous economic costs of the COVID-19 crisis. Washington is, in effect, forcing the Navy and its sister branches to choose between defending against here-and-now threats and preparing for over-the-horizon threats. Policymakers should give the Pentagon the resources to do both, instead of forcing it to go through retrofits and reactivations. As Russia and China revert to behaviors and buildups reminiscent of the Cold War, perhaps it’s time for the United States to return to Cold War levels of defense spending. For most of the Cold War (setting aside the very high levels of defense spending in the early 1950s), Americans spent between 5 and 9 percent of GDP on defense. Today, the United States invests just 3.1 percent of GDP on defense.

Cold War 2.0 will not end as well if Washington ignores the budget blueprint from the first Cold War.