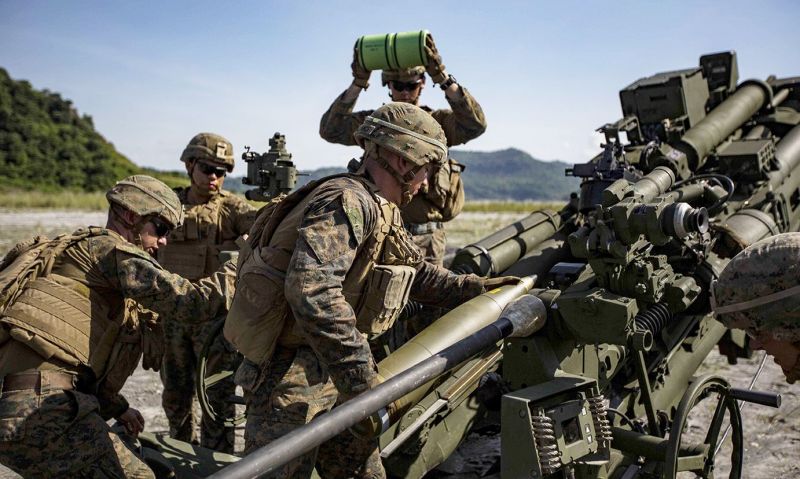 That’s a powerful statement on the importance of allies, perhaps all the more striking given the president’s frustrations with some of them. But even when they cause headaches, America’s allies are vital to America’s security.

Oldest. Let’s start with our oldest ally: France. Many Americans forget that Benjamin Franklin traveled to Paris in 1776 to hammer out an alliance with France. Between 1778 and 1782, as a State Department history details, France “provided supplies, arms and ammunition ... troops and naval support ... transported reinforcements, fought off a British fleet, and protected Washington’s forces in Virginia.”

While the U.S.-France alliance has had its rough spots – Suez in 1956, NATO in 1966 and Iraq in 2003 come to mind – France has generally been a strong ally, especially in recent years.

As ISIS swept into Iraq and Syria, France was one of a handful to join the United States in conducting airstrikes on both fronts. France also deployed commandos for kinetic operations on the ground. The French aircraft carrier Charles de Gaulle served as the flagship for the U.S. Naval Forces Central Command operational taskforce. U.S. warplanes landed on Charles de Gaulle. Charles de Gaulle was even placed under U.S. command. As The Washington Post reported in 2015, “The mission marks the first time that France has placed the Charles de Gaulle ... under the operational command of a foreign nation.”

In addition, France has joined the United States in enforcing freedom of navigation in the South China Sea. France sent warships through the Taiwan Strait in 2019, joining the U.S. Navy in signaling Beijing that it cannot cordon off international waterways. And France recently outlined plans to strengthen military capabilities in the Indo-Pacific.

Given this record, it’s no surprise that in 2018 then-Defense Secretary James Mattis warned London that France was on the verge of replacing Britain as “the U.S. partner of choice.”

Closest. Mattis’ admonition certainly got the attention of Britain, America’s closest ally. Quite unlike France, Britain was America’s enemy and rival for many decades. But during World War II, America and Britain became the closest of allies.

When Winston Churchill coined the phrase “special relationship” to describe the Anglo-American alliance, he envisioned “similarity of weapons,” “the interchange of officers,” “intimate relationship between our military advisers,” and “joint use of all Naval and Air Force bases.”

Fast-forward to 2020, and Britain’s newest aircraft carrier – HMS Queen Elizabeth – is deploying both British and American F-35s. Britain plans for its carriers to serve in “a combined U.S.-U.K. carrier strike group,” according to officials in the Royal Navy. A plan approved by both the U.S. and British militaries commits “a U.K. division to operate effectively within a U.S. corps and a U.K. brigade to operate effectively within a U.S. division.”

Virtually everywhere Americans are deployed – Iraq and Syria, the Baltics and Balkans, Afghanistan and Africa – so are Brits. As British Defense Secretary Ben Wallace puts it, Britain is “the only Day 1, Tier 1 partner capable of fighting alongside the U.S. in the most contested environments.”

Britain conducted the second-largest share of airstrikes against ISIS. Britain has stood with America in Afghanistan from the very beginning of the war on terrorism. More than 450 British troops have died in Afghanistan; 182 have died in Iraq. None of America’s other allies have sacrificed more.

Together, Britain and America rescued West Berlin, forged NATO and deterred the Red Army. They defended Korea at the beginning of the Cold War, liberated Kuwait at the end and faced down Moscow in the years between. They shepherded Eastern Europe toward freedom and stabilized the Balkans. They ousted the Taliban, disarmed Iraq, toppled Saddam Hussein and eviscerated ISIS. And today they are deterring China, Russia and Iran: Queen Elizabeth is headed to the Pacific for its maiden deployment. Britain leads NATO’s forward-deployed battlegroup in Estonia. Britain and America recently partnered to form a maritime coalition to protect the Persian Gulf against Iranian piracy.

Nearest. If Britain is America’s closest ally, Canada is America’s nearest. Sharing a peaceful, open border stretching 5,525 miles (including the Canada-Alaska border), the United States and Canada are deeply integrated on matters ranging from trade and culture, to defense and intelligence.

Canada is America’s largest export market and second-largest trading partner overall. Canada is far and away the largest source of U.S. oil imports. And Canada is an essential part of the security and defense of the United States. The most obvious example of this is North American Aerospace Defense Command (NORAD).

Jointly operated by the United States and Canada, with a U.S. commander and Canadian deputy commander, NORAD monitors and defends the continent’s aerospace and maritime approaches. With its vast network of sensors, radars and satellites, NORAD monitored the skies for Soviet bombers and missile launches during the Cold War. In addition to its traditional mission, NORAD today supports homeland security, missile defense and elements of natural-disaster response. About 1,000 Canadian military personnel are tasked to NORAD.

That’s not Canada’s only contribution to U.S. security. More than 155 Canadian troops have died fighting our common enemy in Afghanistan. Canada leads NATO’s forward-deployed battlegroup in Latvia. Canadian troops have joined U.S. troops in Ukraine for a long-term mission aimed at rebuilding the Ukrainian army. Canada partnered with the United States in conducting airstrikes against ISIS in both Iraq and Syria. And Canadian warships have sailed through the Taiwan Strait at least three times the past year, joining the United States in challenging China.

Freest. According to key measures of economic and political freedom, Australia is America’s freest ally. The Aussies do more than enjoy freedom at home; they defend and promote it abroad.

In Operation Enduring Freedom in Afghanistan, Australia’s armed forces have stood shoulder to shoulder with the U.S. military from the very beginning. In Operation Iraqi Freedom, Australia was one of just three nations that joined the United States in the initial invasion. Likewise, Australia was one of the small handful of nations that joined the United States in conducting airstrikes against ISIS in both Iraq and Syria – and one of even smaller group that also deployed troops for ground operations.

Closer to its neighborhood, Australia is working closely with the United States, Japan and India as part of the Quad security partnership to deter Beijing: conducting freedom-of-navigation operations in and above the South China Sea, participating in joint maneuvers, and beefing up military capabilities. Australia is increasing defense spending 40 percent the next decade; doubling its submarine fleet; deploying anti-ship missile systems, anti-submarine systems, cyber-defenses and squadrons of F-35s; and hosting U.S. Marines, F-22s and B-52s for extended rotations. Australia in October announced that it will, after a 13-year hiatus, rejoin naval exercises featuring the United States, Japan and India. Australia also led the effort to launch an international investigation into what Beijing did and didn’t do about COVID-19.

Richest. Boasting the world’s third-largest economy, Japan is America’s richest ally (based on total GDP). Tokyo recently used some of that wealth to purchase Mageshima Island in the East China Sea from a private seller. Japanese defense forces are now constructing military-grade runways there, with plans for U.S. and Japanese warplanes to operate from the island base. That’s just the tip of the iceberg when it comes to Japan’s growing importance to Indo-Pacific security.

Japan has increased defense spending nine years in a row, is upconverting its “helicopter destroyers” into full-fledged carriers capable of deploying fixed-wing F-35Bs, and is expanding its suite of missile defenses. In fact, the United States and Japan co-developed the SM-3 Block 2A interceptor missile. Japan hosts two powerful AN/TPY-2 missile-defense radars, which are networked with other U.S. missiledefense assets. And Japan deploys a fleet of eight Aegis missile-defense warships.

While Beijing tries to annex the South and East China Seas piecemeal, Tokyo envisions linking the region’s waterways as “seas of freedom and of prosperity.” Just as highways need patrolmen, international waterways need responsible nations to enforce some semblance of order. Toward that end, Japan is expanding its naval activity in the region by conducting joint patrols with the U.S. Navy and other democratic partners.

Perhaps most important of all is the security groundwork laid by Shinzo Abe, Japan’s recently retired prime minister. Abe is considered father of the aforementioned Quad, which is arguably America’s newest alliance. Thanks to Abe’s vision and persistence, the United States, Australia, Japan and India are steadily turning this loose diplomatic grouping into a bulwark against China. Secretary of State Mike Pompeo says the Quad is exploring how “to build out a true security framework.” The Quad partners in October vowed to enhance “cooperation on maritime security, cybersecurity and data flows” and “deepen cooperation to create resilient supply chains, promote transparency, counter disinformation and advance shared efforts to support a post-pandemic recovery,” according to the State Department.

Largest. Speaking of the Quad, India is not an ally in a technical sense – at least not yet. But the world’s largest democracy is rapidly expanding its security connections with the United States.

During the administration of President George W. Bush, India and the United States began to view one another as counterweights to China, each providing strategic depth vis-à-vis Beijing. During the Obama administration, India and the United States signed agreements on defense logistics and technology; Indian warplanes participated in Red Flag; Indian warships participated in RIMPAC; and India became a “major defense partner.” During the Trump administration, Washington has expanded America’s “defense and security partnership with India”; Indian Prime Minister Narendra Modi has called for a “robust strategic partnership” and “growing defense and security cooperation ... to protect our strategic interests”; and total defense trade has grown to more than $20 billion (from zero in 2008). India has acquired U.S. attack helicopters, transport helicopters, UAVs, cargo planes, anti-submarine aircraft and howitzers for its rapidly-modernizing military.

Joint land-warfare maneuvers began in 2002, and U.S.-India exercises grew “dramatically in size, scope and sophistication” in the first decade of the 2000s, according to the Pentagon. In November 2019, U.S. Marines deployed to India for Exercise Tiger Triumph, which involved all three of India’s military branches. In July 2020, the Nimitz carrier strike group rendezvoused with a flotilla of Indian warships for large-scale maneuvers in the Indian Ocean. And in October the two powers signed an agreement allowing them to share sensitive satellite intelligence.

From the oldest to the newest, the biggest to the smallest, each ally represents an important spoke in an international system that sustains the American way of life. These allies are neither a drain on America’s treasury nor a chain dragging America into war. In fact, by deterring hostile regimes, serving as bridges to global hot spots, creating lines of defense beyond America’s shores, and generating sources of material and diplomatic support for American leadership, they enhance America’s security.