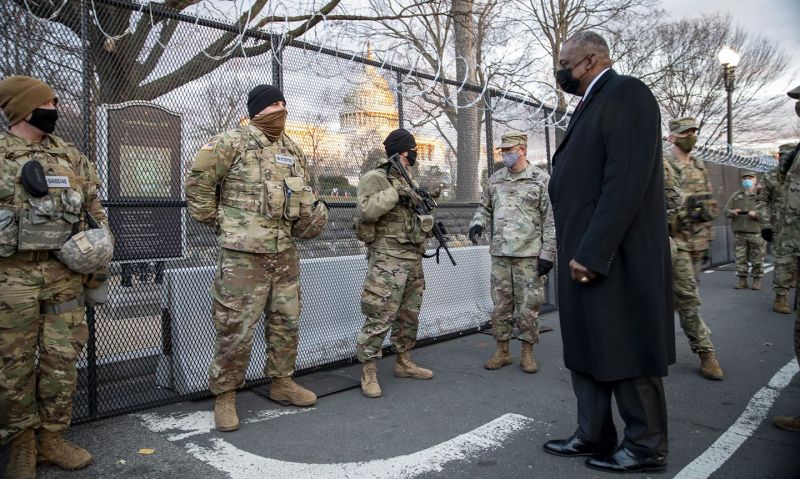 With the large-scale deployment of National Guard personnel in Washington, D.C., to protect the Capitol during the inauguration and initial work of the 117th Congress – a deployment that began in January and continues into this month – the average American has been reminded of the importance of this often-overlooked element of the Joint Force.

That latter number has been far higher in recent months. In the wake of the COVID-19 pandemic, the riots last summer and the attacks on the U.S. Capitol this winter, the National Guard has been especially busy.

How busy? By mid-2020, a record number of National Guard personnel – more than 96,500 troops – were supporting “homeland operations at the direction of their governors,” according to the National Guard Bureau. Some 42,700 of these citizen-warriors were tasked to quelling civil unrest across 34 states and the District of Columbia.

The remaining Guard personnel were countering the consequences of COVID-19 and responding to natural disasters. The Guard’s citizen-warriors supported a myriad of deployments in response to natural and manmade disasters – backing up some 300 civilian law-enforcement agencies throughout the United States, especially on pandemic response. Throughout last year, National Guard personnel conducted screening and tests, sanitized facilities, provided logistical support, delivered meals, and served as a resource for protective equipment, according to the Guard. At the end of 2020, 21,600 National Guard personnel were still tasked to COVID-19 response and relief operations in all 50 states.

The new year has not brought any rest for the Guard, as select Guard units are supporting state health agencies by “securing, transporting and – when requested – administering COVID-19 vaccinations,” according to Guard documents. That mission (which also includes several thousand active-duty troops) will likely last as long there is demand for vaccinations.

The Jan. 6 attacks prompted yet another call for help to the Guard – this time to protect the Capitol and the inauguration from violence. They came from every state, three territories and the District of Columbia – some 25,000 troops in all.

Images of Guardsmen inside the Capitol has brought a strange mix of sadness and pride, concern and relief to many Americans. But more than anything, those images serve as a reminder that there can be no law without order. Most of us try not to think about it, but times of unrest and rioting – times like the summer of 2020 and the winter of 2021 – force us to confront a grim truth: The line separating us from chaos is thin. Here at home, the Guard and its partners in law enforcement not only stand on that line; they often are that line.

Following its motto “Always ready, always there,” the Guard is just as active and just as important overseas.

As the Guard’s 2021 posture statement details, Guard personnel deployed to more than 70 countries the previous fiscal year – in Eastern Europe as part of NATO’s deterrence initiative; in the Pacific training with Australian, Japanese and Indonesian military units; in Afghanistan, Kuwait, Bahrain, Jordan, Qatar and the Horn of Africa in the fight against terrorism; in Central and South America to support and train friendly militaries; in Kosovo and the Sinai as part of peacekeeping operations; in Ukraine to carry out military training programs.

The Army Guard comprises 335,500 soldiers – fully 39 percent of the Army’s operational forces, according to the 2021 posture statement.

Plus, National Guard airmen account for 11% of the personnel in America’s youngest military branch, the Space Force.

These numbers explain why the head of the National Guard Bureau was given a seat on the Joint Chiefs of Staff in 2012.

The importance of the Guard to the nation’s security is – oddly – both a new phenomenon and a tradition that traces its roots deep into history.

Recall that the Guard is older than the republic it defends. The Guard cites Dec. 13, 1636 – the date the Massachusetts Bay Colony created a militia regiment – as its birthday. In 1792, Congress codified the importance of these state militia and outlined how the president could activate them for federal purposes.

State militia have played an important part in every major foreign military engagement since the Mexican War. But the role of Guard (and reserve) forces began to expand significantly with Desert Shield/Desert Storm, when in the twilight hours of the Cold War the Pentagon turned to the Guard and reserves to carry a heavier load. According to a National Guard analysis, 62,000 Army Guard personnel were mobilized by the end of hostilities in the Gulf – the largest Army Guard mobilization since the Korean War – and more than 12,400 Air Guard personnel were called into federal service during Desert Shield/Desert Storm.

After 9/11, tens of thousands of Guard members were mobilized for federal service to provide security at home and engage the enemy overseas. By 2008, the Guard component represented 15% of the U.S. force in Afghanistan. By the time President Barack Obama ordered a withdrawal of U.S. forces from Iraq in 2011, the Army National Guard had deployed 222,485 personnel to Iraq for a total of 259,467 deployments, and the Air National Guard had deployed 34,243 personnel for a total of 44,882 deployments. Overall, since 9/11, "more than a million Guardsmen have mobilized and deployed," and many have deployed multiple times, as a 2021 Guard analysis details.

Add it all up, and the National Guard lives up to both its name and its motto – day in and day out.