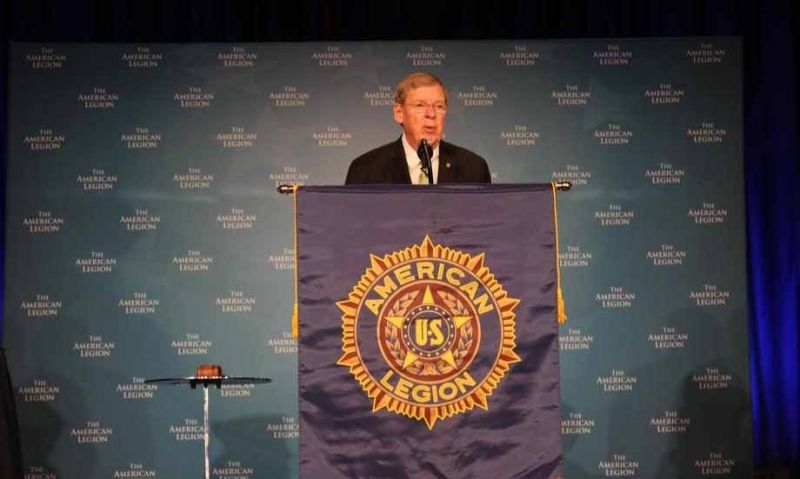 “A champion for veterans” is how American Legion National Commander Paul E. Dillard described the late Sen. Johnny Isakson, R-Ga. Isakson passed away the morning of Dec. 19 at age 76.

His career in service began in 1966 when he joined the Georgia Air National Guard, where he served until 1972. Isakson then went on to serve as a state representative and state senator before he was elected to the U.S. House of Representatives in 1999, winning a special election. The statesman from Georgia was elected to the U.S. Senate in 2004. He served on the Senate Committee on Veterans’ Affairs throughout his Senate career and was appointed the committee’s chairman in 2015. Isakson announced his retirement from the Senate in 2019.

In 2016, Isakson was awarded The American Legion’s Distinguished Public Service Award during the organization’s Washington Conference.

“No one party gets it always right and always wrong,” Isakson told Legionnaires during his remarks at the 2016 Washington Conference. “Nobody fighting for America fights for just Democrats or just Republicans. They fight for Americans. Don’t show me your party. I’m going to see to it that we work together.”

During his time in Congress, Isakson oversaw significant victories for the nation’s veterans. Notably, H.R. 7105, the “Johnny Isakson and David P. Roe, M.D. Veterans Health Care and Benefits Improvements Act of 2020,” was signed into law in January 2021.

The legislation includes the Deborah Sampson Act, which clears the way to improving care for women veterans within the Veterans Health Administration (VHA). It also contained reforms to help student veterans with benefits during the pandemic and called for improvements related to burn pit exposure and COVID.

“Thanks largely to his leadership in the Senate, the Department of Veterans Affairs underwent serious and meaningful reforms that will benefit veterans for generations,” said Dillard. “The MISSION Act, accountability and appeals modernization are all part of his legacy.”

Isakson was a proud Legionnaire and member of Post 233 in Loganville, Ga. His personal motto was: “There are two types of people in this world: friends and future friends.” This is an ideal he embodied throughout his life.

"Johnny was a proud Republican, but he put country before party, and valued building consensus over political combat,” wrote President Biden. “I always loved Johnny's description of the only division he saw as between 'friends and future friends.'"

He is survived by his wife, Diane, three children and nine grandchildren.