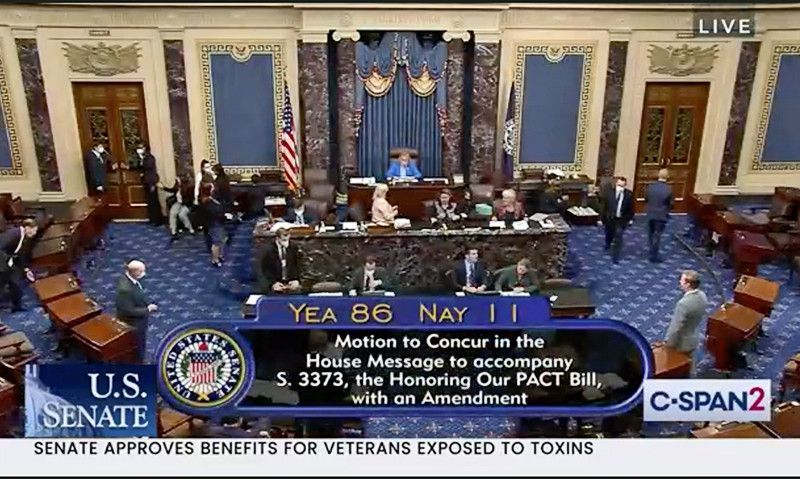 The U.S. Senate issued its final vote on the historic Sergeant First Class Heath Robinson Honoring Our PACT Act, ensuring millions of veterans exposed to noxious fumes emanating from burn pits will have access to Department of Veterans Affairs (VA) care and benefits.

The American Legion-supported legislation passed by a vote of 86-11.

“Tonight, the U.S. Senate passed historic legislation that will make a difference in the lives of millions of veterans,” American Legion National Commander Paul E. Dillard said. “After some unusual delays for a bill that is largely identical to what passed on June 16, a bipartisan majority of senators voted in favor of the Sergeant First Class Heath Robinson Honoring Our PACT Act. This act will save lives and offer health care and benefits for those exposed to the poisons of war while serving our country.”

Dillard pointed out that the Legion’s grassroots advocacy helped ensure the bill’s approval.

“It would not have passed without the tireless efforts of our American Legion Family and friends who contacted lawmakers and encouraged them to do right by America’s veterans. We look forward to President Biden signing the PACT Act expeditiously.”

The bill was previously passed in both the House and Senate before it received technical corrections and went to a procedural vote in the Senate on July 27. The 55-42 vote failed to meet the 60 votes necessary to advance the legislation when 25 senators who previously voted in favor of the bill flipped their votes citing newfound concerns with the legislation.

The sweeping legislation provides a comprehensive framework to improve the presumptive process for burn pit veterans by streamlining access to health-care benefits for those who served in areas of known toxic exposure — regardless of disability status — and provides health care for as many as 3.5 million veterans exposed to airborne hazards and burn pits.

The bill is named after Army National Guard Sgt. Heath Robinson. After deploying to Kosovo and Iraq as a combat medic with the Ohio National Guard, Robinson was diagnosed with a rare autoimmune disorder and stage 4 lung cancer. He died in May 2020, leaving behind his wife and daughter, Brielle. The legislation is expected to be signed into law by President Biden in the coming days.