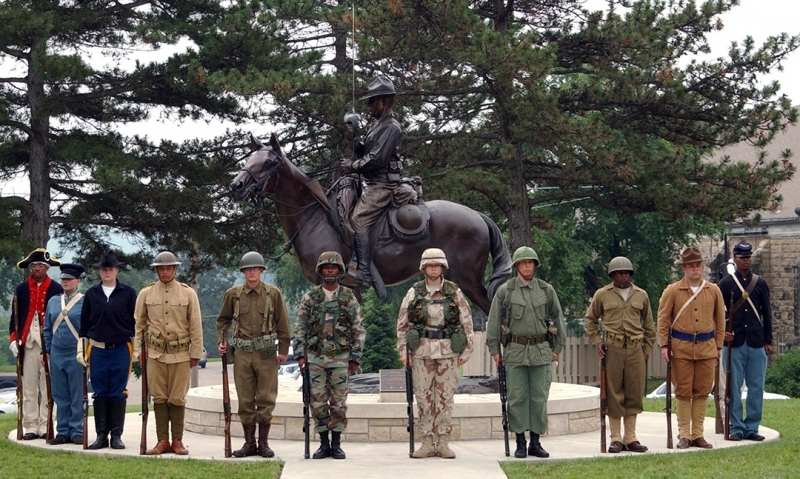 Soldiers at Fort Riley, Kan., represent various periods in the Army's history during a ceremony commemorating the Army's birthday in 2017. (U.S. Army photo)

June 14 is the birthday of the U.S. Army. According to the U.S. Army Center of Military History’s website – at history.army.mil – it was on June 14, 1775, that “the Continental Congress authorized enlistment of expert riflemen to serve the United Colonies for one year.”

The site also includes information about the specific birthdays of the Army's basic and special branches. Those are interesting factoids in themselves, but here are some other things you might not know about the institution.

1. Before World War II, 45th Infantry Division members wore a swastika patch on their left shoulder in honor of Native Americans. It was changed to a thunderbird in the 1930s. (via USO)

2. The Army was tasked with mapping America, including the Lewis & Clark expedition. Army officers were some of the first American citizens to see Pikes Peak and the Grand Canyon. (via USO)

3. The Army was the last service branch to adopt an official song. On Veterans Day 1956, “The Army Goes Rolling Along” was so declared. (via USO)

4. Twenty-four U.S. presidents served in the Army, including in state militias that supported it during the American Revolution and the Civil War. (via Mental Floss)

5. And two of them are connected: in the famous painting “Washington Crossing the Delaware” by Emanuel Gottlieb Leutze, the man holding the flag alongside future president George Washington is future president James Monroe. (via Mental Floss)

6. There are Army astronauts, who wear astronaut wings. One is retired Col. Douglas Wheelock, who logged 178 days in space after serving as the first active-duty soldier to command the International Space Station. (via Mental Floss)

7. If the Army was a city, it would be the 10th-largest in the United States. (via We Are the Mighty)

8. And it owns so much land that if it was a state, it would be larger than Hawaii and Massachusetts combined. (via We Are the Mighty)

10. The oldest active-duty infantry unit is the famous 3rd U.S. Infantry Regiment, also known as "The Old Guard." Stood up in 1784, the 3rd is an official ceremonial unit and escort to the president of the United States, and is also in charge of the "Changing of the Guard Ceremony" at the Tomb of the Unknown Soldier. The Old Guard received The American Legion’s Distinguished Service Medal in 2016. (via Fact Retriever)