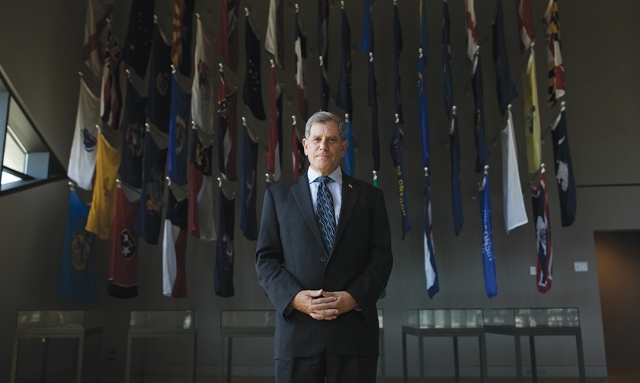 Not only was Tim Shigley adamantly opposed to a national veterans museum in Columbus, Ohio, he organized protests against it.

Plans calling for the Franklin County Veterans Memorial to be razed troubled Shigley and other former servicemembers. With plaques memorializing veterans displayed inside, the building served as a convention hall that hosted business meetings, Arnold Schwarzenegger fitness contests and concerts like The Who in 1969. But John Glenn – Marine Corps veteran, U.S. senator and astronaut – imagined a new purpose for the building and Columbus: a national museum paying tribute to all U.S. veterans.

In 2014, as plans advanced and tensions rose, Shigley – representing The American Legion – joined the Veterans Advisory Committee. The committee voiced concerns about the project while also helping shape Glenn’s vision.

“Through some negotiations and talking I started to see what they had in mind,” recalls Shigley, a member of Memorial Post 614 in Hilliard. “As the process began, we met with the architects, the landscape designers, the construction companies. Our voices were well-heard by all of them.”

For example, committee members answered questions about phrases, terms and euphemisms that veterans take for granted but may not be widely understood by civilians, Shigley says.

“We were sitting around one day talking about the veteran phrase, ‘We all wrote a blank check,’” he recalls. “One girl in the room asked, ‘What do you mean by that?’ So we explained what it means for a veteran to write a blank check. And that became a very intricate part of a display and part of the overall narrative of the project.”

SHARING STORIES On Oct. 27, nearly three years after construction began, the 50,000-square-foot National Veterans Memorial and Museum was set to open in Columbus. A 2.5-acre Memorial Grove, created as a place for reflection and remembrance, is on the 7-acre downtown campus.

Inside the museum, visitors can trace the service and sacrifice of U.S. veterans from the Revolutionary War through the war on terrorism. What they won’t see are tanks, warplanes or weapons common in military museums. Instead, the few objects on display add context to veterans’ stories.

“One is a flag that has special meaning to a veteran named Andre,” given to his family after his great-grandfather died in World War II, says Amy Taylor, chief operating officer of the Columbus Downtown Development Corp., which oversaw the project. “It was Andre’s inspiration ... he was in a military family and was going to continue the tradition. The story is amazing, and seeing the flag gives me goosebumps. But if I saw the flag without the story, it would do nothing. It’s about making that connection.”

Multimedia presentations convey veterans’ stories from basic training through service and beyond. “There’s an integral part of this that has to deal with what it’s like to be a veteran and how veterans are treated, how some veterans live with fond memories and others with painful memories,” Shigley says.

The museum acknowledges struggles such as post-traumatic stress disorder.

“We wanted to tell both sides or all sides of the story, because for some veterans it’s not a fun story,” he says. “Some people still look at the ground when they say they’re veterans because of times in our history ... we know what happened in Vietnam, and sometimes the treatment coming back was not all warm and fuzzy.”

MAKING CONNECTIONS Retired Army Lt. Gen. Mike Ferriter served 35 years, mostly in infantry, parachute and Ranger units. Later, he commanded Army bases around the world. He was waiting for something “special” for his next assignment.

That turned out to be the museum’s first chief executive officer and president.

“Life is about people, and veterans are very special people,” says Ferriter, who did three combat tours in Iraq and one in Somalia. “A life of leadership and a life of dealing with soldiers from E1 to secretary of the Army, sometimes in the same day, set me up for that. And I think they were looking for someone with what we would call street credibility.”

“They are the four pillars that are non-negotiable,” says Ferriter, noting that they were inspired by Glenn’s vision. “Whoever walks in here will be able to see what this means to them through one of those words. We’re going to connect America to our veteran population through this. We’re going to honor the service and the sacrifice of our veterans and their families, who kept it all going when the veterans were deployed for training or in combat.”

The museum’s grand opening will be celebratory but respectful, Ferriter adds.

“We want to get the word out to as many veterans and their family members that their service was honorable and made a difference in the nation’s history,” he says. “We want to connect. We want to inspire and educate. And we want to have fun.”

Ferriter compares the opening to a wedding, full of pomp and circumstance. Then comes the hard work – the marriage – and the long-term, daily effort to grow and build on the foundation. Among the museum’s plans: developing an internship program, online curriculum and traveling exhibit.

“We can work and develop fellowships,” he says. “We can bring interns here – like students studying videography or IT – and they can gain college credit. We can create simple history for sixth-graders. We can align our product and our curriculum to match what they need, and they can receive credit as they observe and learn. The sky’s the limit.”

More than $82 million has been raised from individuals, corporations, foundations and public/private partnerships. As for the veteran plaques in the original building, most will be displayed in the new museum, Taylor says. Shigley has relocated to Florida but was planning to return to Ohio for the opening.

“Now that we can touch it and feel it and see it, the sentiment has changed a lot,” he says. “The American Legion in Ohio got behind this very quickly. A lot of people who were against it are now saying, ‘Oh, wow. We didn’t think this is what you guys had in mind. We thought you were just going to put a piece of rock in the ground and call it a memorial.’

“It has exceeded my expectations a thousandfold. When we began this project, I would have never thought for a minute that one day we would be part of what would be the National Veterans Memorial and Museum.”