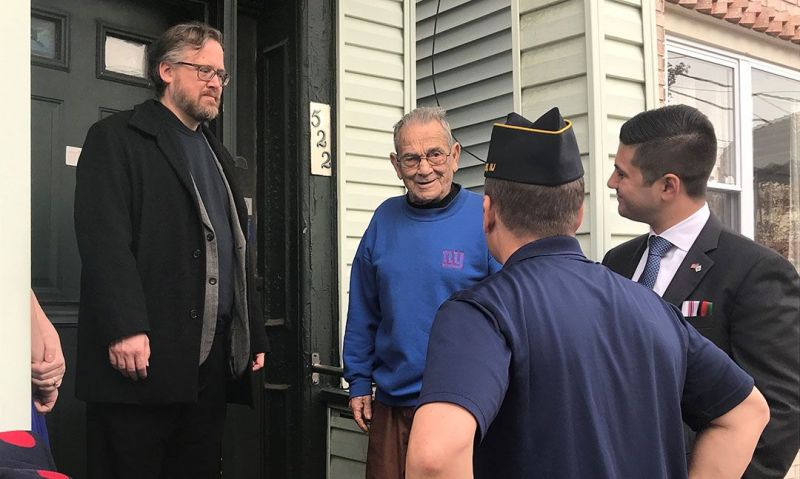 During the 2019 Spring Meetings, the NEC passed Resolution 18, which calls for the twice-annual Buddy Checks to be conducted Legion-wide on the weeks of The American Legion’s birthday and Veterans Day.

American Legion posts again stepped up. In Weehawken, N.J., members of Post 18 took to the streets to connect with members of the post who haven’t been active in recent years, including one 91-year-old World War II widower.

“That’s what (non-commissioned officers) do in the service. You’re supposed to check up on your troops,” Post 18 Commander Chris Page said. “We’re charged … with the health and welfare of our troops. What we like to do is check up on our members and make sure they’re OK. We also check in on their families as well. It goes back to helping out with the community.”

And in Fort Gibson, Okla., members of Frank Gladd Post 20 were conducting Buddy Checks and came into contact with an 87-year-old Korean War veteran who hadn’t paid his membership dues in two years. Past Post and District Commander Jim Quinn said the veteran told the post he could no longer make it to post meetings and that his membership in the Legion was no longer important to anyone.

“I was dispatched to the veteran's house with his membership card,” Quinn said. “When I arrived at the veteran’s house, he invited me in and we had about a half-hour conversation about the current weather and our time in service. I asked him about his welfare and if there was anything we at the post could do for him. He replied that he was fine but he had trouble driving.”

Quinn left the veteran’s membership card with him and “told him if he needed any help with going places to call the post and we would arrange to take him where he needed to go. He told me he was not in that bad of shape but if he needed help he would call.”

The post processed the veteran’s membership with “Pay It Forward” funds. Two weeks later the veteran called the post and requested Quinn return to his house. “When I arrived he presented me with a check for his 2019 and 2020 dues,” Quinn said. “The moral of this story is cast your bread upon the waters, and it will be returned to you tenfold. An act of faith and kindness shown to this veteran convinced him that his post stands for the ideals of The American Legion and not just to collect dues.”

The following are a few more examples of what posts did on Veterans Day or have developed as programs to follow the Buddy Check philosophy.

• In St. James, N.C., American Legion Post 543 had a busy Veterans Day weekend that included distributing poppies that Saturday, and taking part in a parade and a Veterans Day picnic. A Buddy Check also was performed on Veterans Day, when the post’s honor guard and officers visited the Carillion Assisted Living where – after the colors were presented and the national anthem played – veteran residents were given a challenge coin from the Post 543 Commander George Freeman, and widows of veterans were given U.S. flags representing their loved ones’ service. Post 543 Service Officer Steve Muir said the post also has 70 active programs that regularly reach out to veterans in need in the community. “I must say that what Post 543 does in the Brunswick County, North Carolina community goes way beyond Buddy Checks,” said Muir.

• In Blue Ash, Ohio, American Legion Post 630 has initiated a “Never Alone” program. Coordinating with the Cincinnati VA Medical Center, the post receives notice whenever a veteran with no known family passes away. The post ensures there are veterans graveside to give their fellow veteran the proper farewell. The program was the idea of Post 630 member Pat Buschman.