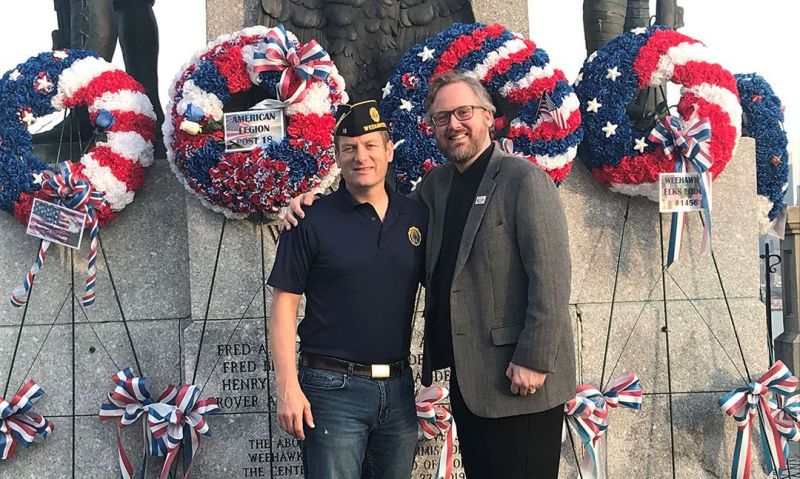 Located along John F. Kennedy Boulevard East, overlooking the Hudson River and with a real estate developer’s dream view of the New York City skyline, American Legion Post 18 in Weehawken, N.J., seems to be located in a prime spot to make a positive impact in its surrounded North Hudson County community.

But more than two years ago the post was at risk of closing. There was little in the way of community involvement, and the post was struggling financially.

But a group of post-911 veterans have led the charge in turning around the 100-year-old post, more than doubling its membership while bringing the post back into the role of a community staple.

Both Chris Page and Troy Robert Mack joined Post 18 in early 2017. Mack, who served in the U.S. Army from 2004-2009, needed some time after his service before joining a veterans service organization. “It was a long road home from Iraq,” he said. “I needed, and God blessed me with, time to heal. By 2017, I felt I was at a place where I could stand up in front of the mirror and the community and be of use. I looked for opportunities to be of use to my neighbors.”

The situation at Post 18 provided Mack, now 39 and the post’s first vice commander, with that opportunity. “I understood that The American Legion was a platform for continuing to serve,” he said. “For me, the (Legion’s) Four Pillars were not just catchphrases. They’re things about which I truly believe and I think are worth dedicating one’s time to pursue.”

Page, who was active duty in the Army from 1992-1999 and currently is a sergeant first class in the Army reserves moved into the role of post commander, one he still has today, less than a year after joining the post. The 44-year-old had recently returned from the Middle East when he came to Post 18 with a few friends to see if he could help turn the post around.

“It was pretty sad,” Page said of Post’s 18 situation. Page eventually reached out to state American Legion leadership, and steps were taken to remove the prior post leadership in late summer of 2017.

Page provided a financial analysis of the post and developed a plan to pay off all the post’s debt by the end of summer 2019. He also took over as post commander in the beginning of 2018.

Page said he envisioned “a kind of holistic approach to the community.” That included helping veterans in need while teaming up with other agencies to benefit the entire community.

Engagement in the community recently has included:

• Hosting a Family Fun Halloween Bash in October that was open to children of all ages and featured both games, entertainment, face painting, arts and crafts, and information for parents that included resources on family health, respite services, and support for intellectual and developmental disability.

• Hosting its first Women’s Wellness Day in recognition of Breast Cancer Awareness Month. The event brought together a wide range of health-care providers, along with legal and financial services’ nonprofits. “That was important to our membership because of the need for greater attention to health and wellness needs of our female veterans,” said Mack.

• Bringing back the tradition of marching in Weehawken Memorial Day parade; in 2018, Post 18 member and U.S. Army veteran Lucy Del Gaudio was the parade’s grand marshal. “This town had never had a female grand marshal … which was a huge first for us,” Page said.

• Hosting mourning ceremonies for veterans who pass away with no family in the area, including one recent Korean War veteran. “We made sure there was an appropriate military ceremony,” said Mack, who served as the ceremony chaplain. “We did the best that we could to honor some of those military traditions. It’s something we’ll do for any of our local veterans who might not be able to have a wake or a proper funeral service. That’s something that Chris and I were very passionate about bringing back.”

“That’s kind of like the overarching mission from the get-go: helping the community (and) being more community-focused,” Page said. “We allow the Scouts to have meetings here. Church groups. All sorts of great events that reconnect us with the community.”

That kind of engagement has brought in more Legionnaires. The post’s membership has climbed from around 30 when Page and Mack joined to nearly 70. The post also has an active Auxiliary unit comprised of both male and female members.

Many of the post’s members are younger veterans. Thirty-two-year-old Adam Kerr, who served in the Army from 2009-2013, serves as both the post and Hudson County sergeant-at-arms. He already was a member of the Legion but transferred to Post 18 in 2018 after seeing what was happening there through his work with The Mission Continues, a nonprofit that connects veterans with under-resourced communities.

“It was a big thing, coming here and seeing (the post) being started up again,” Kerr said. “And I think a big part of it, too, was being around post-9/11 guys. At my previous post I was the youngest guy by 30 years. I transferred here, could appreciate this leadership, and that was it. Being a part of it coming back and being a legitimate, respectable post.”

Craig Vogel, 30, served in the Army from 2012 until this year and said he wasn’t thinking about joining a veterans service organization – until he connected with Page. “This is a great way for veterans to connect with each other,” Vogel said. “My civilian friends will never have that same connection that I have with fellow servicemembers. When I was in New York City I didn’t feel like there was (a veteran support network). When I moved to New Jersey and met Chris, I was like ‘there’s a support structure here that if I ever had a problem I couldn’t talk about with a regular civilian, I’d have buddies here.’ And I want to be there for someone who says ‘hey, I’m having a rough time here.’ That’s what we do for each other.”

Legionnaires who were members of the post before the current revitalization are “over-the-moon happy about it,” Page said. “We’ve had nothing but positive feedback.”

While Page and Mack are the leaders of a group responsible for turning things around in Weehawken, they refuse to take all of the credit. The pair both praised Hudson County Legion leadership for their mentorship as the post has rebounded.

“That’s been one of the real blessings for me as a Legionnaire: being able to say I’ve got some great big brothers and big sisters who’ve shown us the way,” said Mack.

Page has looked back at the post’s history and saw a centerpiece within the Weehawken community. It’s a role he, Mack and the rest of Post 18’s membership are dedicated to maintaining and expanding.

“Our vision has been to ensure (the post) is grounded in the community (and) make sure it provides a statement about the same principles to which we pledged our service,” Mack said. “That’s been a truly rewarding experience for all of us.

“It helps drive our membership. And it helps reposition The American Legion for whatever the 21st century has in store for us. We shouldn’t just exist for the sake of existing. The heart and soul of it all is to provide a platform for service.”