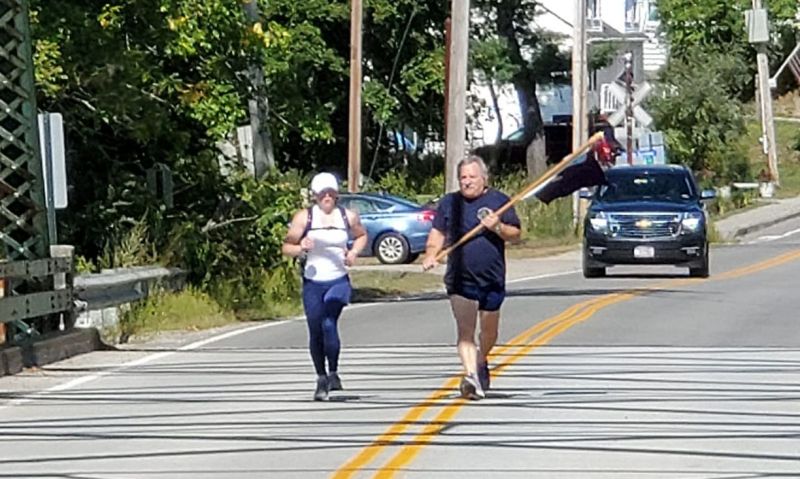 MARATHON Why I Run:

I run to feel the Music

I run to feel the fresh Air

I run to forget the Rage

I run to forget the Anxiety

I run to embrace the Time

I run to embrace the Honor

I run to remember the Oath

I run to remember the Need

At 7 a.m., she started at Veterans Park in Lewiston, Maine, for the 26.2-mile route ahead of her. The finish line wouldn’t be on Boylston Street as initially planned, but the crisp air and peacefulness of the morning allowed the Legionnaire to reflect on her reason to run – to honor a close friend and survivor of the 2013 Boston Marathon bombing, and to support the American Legion Department of Maine Foundation.

By noon, Yarmala finished her virtual 2020 Boston Marathon outside of her post home, American Legion Post 202 in Topsham, Maine. And she wasn’t alone.

Legionnaires, including her father and boyfriend, carried the U.S. flag and the five military ones behind Yarmala as she broke through the finish line of blue streamers with cheers from American Legion Family members waiting her arrival. “We were able to cross the finish line together,” she said. “After completing the marathon, I learned that plans may never work out the way you want them to. Life gets in the way, obstacles can get hurled in your path, the unfathomable can become the new normal. But with the right foundation, support team and self-perseverance, your goals are still obtainable.”

Yarmala ran the Boston Marathon virtually after the nationwide pandemic canceled the race in April that’s held annually on Patriots Day. She had the opportunity to use a guest race bib of Michelle L’Heureux, daughter of longtime Department of Maine Adjutant Paul L’Heureux, who has gone through several surgeries due to wounds suffered from the 2013 Boston Marathon bombing.

It was Michelle who inspired Yarmala to run her longest distance yet.

Yarmala and boyfriend Matthew Jabaut, the Department of Maine commander, have “made a lot of great friends in The American Legion,” including Paul, his wife Audrey and Michelle. While together at Post 202 last September, Yarmala listened to Michelle share experiences of marathon training and racing. It was then that Michelle mentioned wanting to give her 2020 Boston Marathon guest bib to an American Legion member who would raise money for the Department of Maine Foundation.

“Being able to use the Boston Marathon guest bib to raise money for the foundation and all the wonderful programs of The American Legion in Maine, it seemed to all fit and everybody was there for whatever we were going to need,” she said.

Yarmala followed in Joseph’s footsteps, a retired U.S. Navy corpsman, when she joined the Navy in 2005 following high school graduation, becoming an equipment operator in the Seabees with deployments to Okinawa, Japan, Iraq and Guam before leaving active duty in 2010.

“I needed someone to remind me not to overdo it and hurt myself, and I knew he would be the right person to do that,” Yarmala said about her father, who coached her and her siblings in their respective sports growing up. “He gave me that motivation to keep going a lot times. He has always been a pretty active person and enjoys coaching, and seeing other people succeed in those endeavors.”

Yarmala and her father began training together late last November by first going to the gym and then running a 4-mile race in January “as our introduction into racing. And for a good experience of how it was going to be for the rest of training (outside) in the Maine winter.”

Just over a month out from race day, the Boston Marathon was postponed – then eventually moved to virtual only – because of safety surrounding COVID-19. It didn’t put an end to Yarmala’s training, fundraising or lofty accomplishment ahead of her.

“You have to adapt and overcome when something crazy like COVID happens,” she said. “We used this opportunity to involve more of our American Legion Family.”

Legion Family Supports Its Own. Since joining Post 202 four years ago, “The American Legion has given me a reconnection to others in the military … you have a lot of friends, but you don’t always have the friends that understand the military side," Yarmala said. "The Legion helped bring that camaraderie together. It’s more than just the Legion; it’s a family. The people we have met we absolutely love and we know we can call upon them for anything that we need.”

Those calls for support were answered.

The 26.2-mile virtual route had five stops to honor each branch of the military. At each stop, which included American Legion Post 135 in Sabattus and Post 158 in Lisbon, a changeover of the military branch flags occurred – a veteran would be waiting for Yarmala to run alongside her for a distance while carrying the flag of their respective service. Post 202 member U.S. Rep. Jared Golden, an Iraq and Afghanistan veteran, carried the Marine Corps flag; Jabaut carried the Army flag; and Joseph ran with his daughter while carrying the Navy flag; other veterans met Yarmala to carry the Coast Guard and Air Force flags.

A support vehicle with Jabaut, Joseph, Paul and a few other Legion Family members inside followed Yarmala for the entire route to provide assistance when needed.

“I’m just so thankful for Michelle, and her perseverance and strength is awe-inspiring and helped motivate me quite a bit through the run,” Yarmala said. “Running reminded me that we are living in a time of chaos and uncertainty, but we really need to stop fighting one another and start working together for a common goal. Help pull our brothers and sisters out of the dirt and pull each other up by the bootstraps and cross that finish line together as a united front.

“The American Legion Preamble says ‘to promote peace and goodwill on earth’ … running that marathon it gets quiet in your head sometimes, and that’s the thing that kept going for me.”