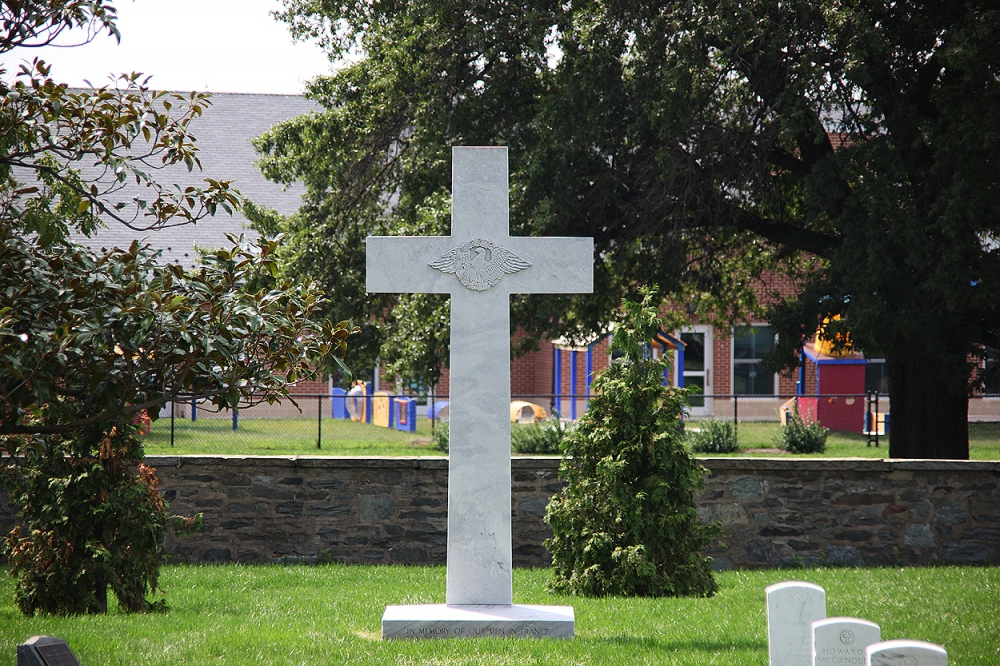 Looking west at the Argonne Cross at Arlington National Cemetery in Arlington, Virginia, in the United States. A portion of Ft. Myer, a U.S. Army base which abuts the cemetery in the west, can be seen through the trees. Maas-Argonne Offensive, also called the Battle of the Argonne Forest, was a part of the final Allied offensive of World War I that stretched along the entire western front. It lasted from September 26 to November 11, 1918. Of the 187,000 Allied casualties, 117,000 were American. (The Germans lost 90,000 to 120,000.) After the war, many American dead were repatriated from cemeteries in Europe. About 2,100 remains were reinterred in Section 18 at Arlington National Cemetery. In 1921, the Argonne Unit of the American Women's Legion successfully won permission from the U.S. Department of War to erect a plain white cross in Section 18 in honor of those Americans who died during the Battle of the Argonne Forest. The white marble memorial, which is 13 feet high and adored with an eagle and wreath on its intersection, was dedicated on November 13, 1923. A grove of 19 pine trees once formed a semi-circle to the sides and rear of the cross, as a symbol of the forest in which the soldiers fought and died. Many of these trees have since died, fallen over in storms, or been replaced. A more loose grove of pines now adorns Section 18. On the rear of the base is the following inscription: ERECTED THROUGH THE EFFORTS OF THE ARGONNE UNIT AMERICAN WOMEN'S LEGION

The Argonne Unit of the American Women's Legion,