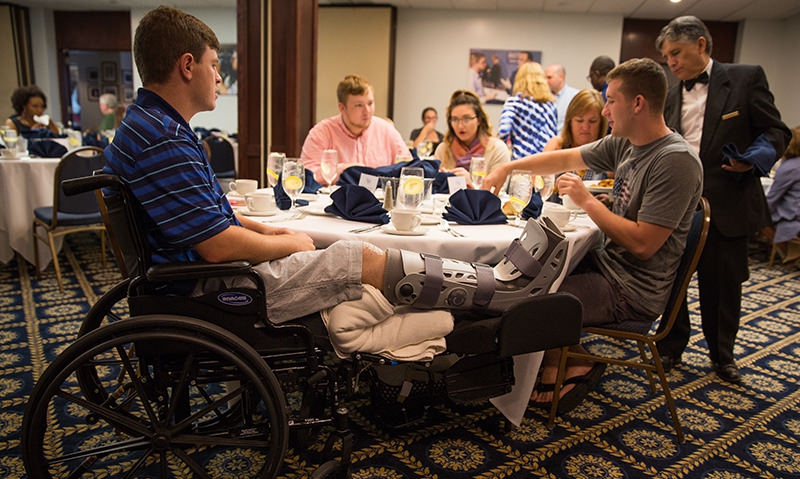 It is commonly said in American culture that, what doesn’t kill you makes you stronger. This notion resonates with many people, especially veterans and servicemembers who may have survived a calamity or endured hardship of any kind.

For the last 14 years, the Aleethia Foundation has played an integral role in the healing process for America’s heroes and their families by hosting dinners every Friday night.

“That’s really what it’s all about – just trying to help them heal,” said Hal Koster, founder and executive director of the Aleethia Foundation. “A lot of what we’re seeing now is not as many combat injuries. We’ve got two people here that are getting kidney transplants, some cancer patients and some other people injured from car accidents. But they’re still military people and that’s really all that matters to us. Some people insist on only supporting the combat injured; we don’t care about that. If they served in the military, then we’re there to help them.”

OCW provided four Samsung tablets for the Walter Reed patients to use during their recovery, as well as basketballs, footballs and Fitbit activity trackers for rehabilitation and physical therapy. In addition, guests received door prizes ranging from Amazon gift cards to Sega Genesis game consoles. The grand prize was a new Xbox game system.

“It means an awful lot to see that they can relax, smile after a hard week of work and that sort of thing,” Koster said. “Aleethia is a Greek word for truth. The truth about combat is that there are going to be injuries and there’s going to be people that need help. That’s true for anybody.”

Koster, an Army veteran who served in the Vietnam War, said the Friday night dinners are about recovery, fellowship and community as much as they are about food. What started out as a steak dinner for two soldiers in October 2003, has grown into a commitment to honor and support wounded or injured servicemembers and their families, he said.

The foundation continues to operate on a voluntary basis.

“It’s literally turned into a family event not just with my own family, but (the Aleethia Foundation) is my family now, too,” said Ryan Hughes, a Marine Corps veteran who medically retired after serving 12 years. “It’s really great especially for a day like today. I was having a pretty crappy day, but coming here and seeing the faces of other Marines that you know, it really lifts you up. When you’re at work, you don’t always have that.”

For Hughes, he is most grateful for the little things that make a big difference. He said the Aleethia Foundation not only helped with getting his benefits during the retirement process, but also encouraged spending more time with loved ones.

“My son loves balls. I’ve won a basketball and football so that gets me outside with him and playing more, instead of just sitting in the house,” he said. “He’s two-and-a-half years old and the minute he sees a ball, he wants to have a good time. It’s the little things you don’t think about that make such a big difference. That really is good for him and myself. It keeps me moving.”

Nowadays, Hughes spends his time volunteering for the foundation by taking photos. He said it’s something that he enjoys and gives him a new sense of purpose in life.

“What I thought before and what I think now are along the same lines, but I feel like I need to do more,” said Hughes, who served in Afghanistan and two tours in Iraq. “One may ask how do you do more after going to combat, but it’s just amazing to have somebody out there who you can reach out to. Whether you know it or not, somebody is struggling so I feel like you should continue to serve after the military. It’s just a real big pride and joy.”

For Koster, service runs deep in his family. He said everyone is capable of serving in any way, shape or form.

“Service is important to me,” Koster said. “It’s been engrained in my family – my brother was Air Force, I was in the Army, my son was Army, my daughter is in the Navy. That’s just the way it is. This is your country and I think everybody ought to give two years regardless of what it is. You owe the country.”

The Legion's OCW program is designed specifically to help recovering servicemembers and helped provide the dinner. The Legion has been involved since the start of the Aleethia Foundation’s dinners in 2003 and in each of the past few years, OCW has sponsored dinners quarterly.

“Early on, one of the more severely wounded warriors said coming to these Friday night dinners was his first taste of normalcy again,” said Vietnam veteran Jim Mayer who helped start the dinners. “There’s this army of volunteers who just pitch in and magically fix things for them. It’s like a personal way of saying thank you, but also it’s a personal way of saying, ‘We know you’re a human being and we know you’re going through temporary troubles. There’s a light at the end of the tunnel. Take a look at us old guys – we made it and you’re going to make it.'”​