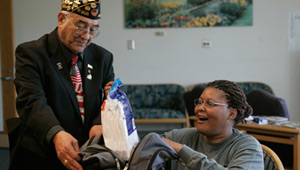 As the war in Afghanistan winds down, U.S. military personnel are coming home where they join other recent veterans who served in Iraq. Many of these servicemembers have left the battlefield only to be faced with a new fight: a struggle to overcome the mental and physical wounds suffered during deployment. Those with traumatic brain injury (TBI) or post-traumatic stress disorder (PTSD) are returning home in unprecedented numbers. In fact, the Army has said that up to 20 percent of the men and women who served in Afghanistan or Iraq have suffered TBI.

Even as the wars conclude, those in the military still face inherent dangers while fighting the global war on terrorism, during training exercises and while performing other dangerous duties.

While the care at many military hospitals and warrior transition units is extraordinary, The American Legion's Operation Comfort Warriors (OCW) program was created to provide "nonessentials" - items that help wounded warriors' recovery but don't usually show up as a budget line on government spreadsheets.

The Legion contacts officials at military hospitals, warrior transition units and surrounding communities, and obtains lists to determine which items are needed by wounded, injured or ill servicemembers. Once a need is identified, the items are ordered by the Legion and delivered in an expeditious manner. It's as simple as that. No red tape. 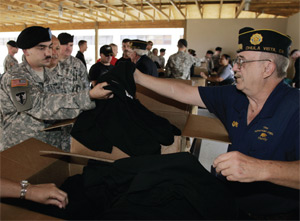 Today, wounded warriors need a variety of items to help in their recovery. Some patients might need loose-fitting sweatsuits to cover their healing wounds without adding pressure to burns sustained during a rocket attack. Others might need an iPod to help drown out the tinnitus that has plagued their ears since their vehicle struck an IED. Still others might need fitness equipment to rebuild strength in their muscles.

From gift cards to patients at Walter Reed National Military Medical Center, to electronics for Marines at Camp Pendleton, OCW represents the Legion's expression of gratitude. These gifts will not make our wounded warriors whole again, but they do express the Legion's gratitude.

The program relies on funds, which are used to purchase items for the servicemembers.

How You Can Help 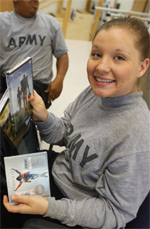 Most military medical centers are not equipped to store large quantities of care packages. The Legion strongly prefers monetary donations so that it can expedite the purchase and delivery of items to troops.

Checks may be mailed to:

How to raise money

A fundraiser such as a motorcycle run or a fish fry can be a great way to gather donations. A local Legion post, auxiliary unit, Sons of The American Legion squadron, Legion Riders chapter, church group or other charitable organization could assist in holding a fundraiser. Proceeds from a fundraising event can be donated to the Legion via the website or mailing address listed above.