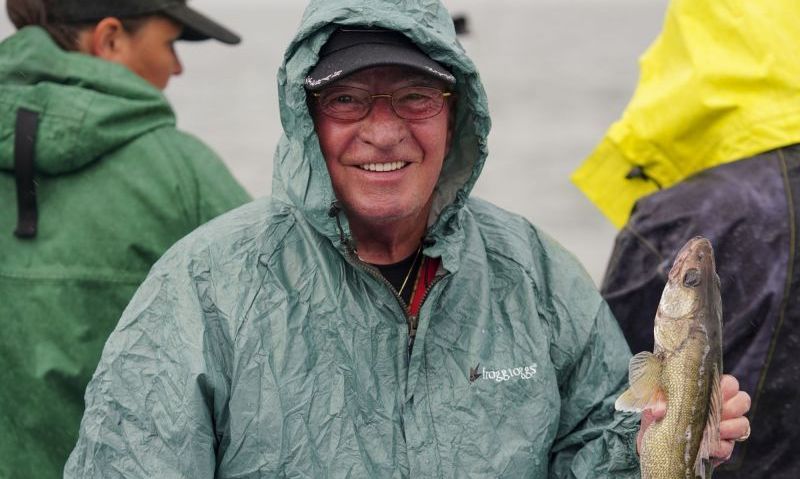 Fifty years ago, Paul Minillo, Bill Hancock, Ron Marmon, Joe Hughes and Tom Crites all served together in Vietnam in the U.S. Marines’ Hotel (H) Company in the 2nd Battalion, 26th Marines, 5th Division. All five men earned Purple Hearts, as did more than 90 percent of those who served in Hotel Company; another 74 of the company’s Marines were killed in action.

Their service together created a bond that the five men have turned into decades of friendship that include regularly meeting up to reminisce and, in part, to continue healing. Their most recent get-together occurred on Lake Erie June 19-23 and happened in part due to The American Legion’s Operation Comfort Warriors (OCW).

In fact, the entire event is free to the participants, helped in part by an OCW grant of $16,000 that covered two meals a day and lodging for the veterans and first responders. OCW has been providing grants to Walleyes for Wounded Warriors since 2014. The grants have grown in size over the years and are crucial to the success of the event.

“It’s huge. Like every nonprofit, our blood is donation money,” said Walleyes for Wounded Heroes President Joe Stelzer, a member of American Legion Post 323 in St. Marys, Ohio. “With what the Legion does, it’s incredible. For us to come up with that money every year that the Legion donates would be so many extra hours that we just don’t have.”

While fishing is the primary activity for the participants, it’s only part of the experience. “It’s camaraderie. It’s a healing thing,” said Marmon, a 41-year Legionnaire and now a member of Post 513 in Cincinnati. “Guys goes home feeling a lot better. When you go home … you’ve got more friends than you had when you got up here.”

Marmon and the other members of Hotel Company have been taking part in Walleyes for Wounded Heroes since 2016. Minillo, a 21-year member of Jay Wilson Post 112 in Madison, Ohio, enjoys “seeing my brothers. Getting together with them. And the fishing is always good.”

The weekend gives Crites – a member of American Legion Post 452 in Stanton, Mich., for 20-plus years – a chance to “be with my brothers. And we also get a chance to help other veterans. We went through some of the same things they went through. If we can help them get help, get their PTSD more under control … it can help the younger veterans bond with us. We’re here as older people and can take a younger guy under our wing and become friends with him. Each year we see them that bond grows stronger. It’s really satisfying for us to help other veterans.”

Hancock, a member of Post 513 in Cincinnati, also sees the weekend as a chance to work with the younger veterans participating. “The nice thing about this is we get to talk to some of the young veterans that are coming back. And we listen to them. They don’t need to hear our stories. What they need to do is tell their story. And they know they can tell it to us.”

One of those younger veterans attending the event was two-time Purple Heart recipient Jesse Sage, who medically retired from the U.S. Army Rangers in 2015 after suffering a traumatic brain injury. Despite an age difference between himself and veterans from previous conflicts, Sage said a connection remains.

“I think that one thing that all combat veterans share in common – although their theater and their enemy were different – is trauma is trauma,” said the 41-year-old Sage, who deployed 10 times to Iraq and Afghanistan as part of the 101st Airborne Division and 3rd Ranger Battalion. I think that bridges the gap between those wars.”

Sage said he was able to connect with other veterans during the five days in Marblehead, connections he’ll take with him back to Iowa. Meanwhile, U.S. Army veteran Jimmy Cantrell, who received a Purple Heart after being injured in Operation Just Cause in Panama and went on to serve in Operation Desert Storm, saw a caring side to the event. “I really got to meet … a lot of great people (and learned) how much this community really cares about us and what we’ve done,” he said.

Cantrell came to Walleyes for Wounded Heroes because he found himself slipping into a “bad place.” The time away with other veterans made a difference for him.

“A lot of the thoughts are gone, the bad thoughts I was having,” Cantrell said. “They really disappeared.”

Cantrell’s story is nothing new to Marine Corps veteran Ferd Lohman, a volunteer with Walleyes for Wounded Heroes. He said the difference between some of the veterans when they arrive at the start of the week and how they are at the end is “night and day. When the first-timers get here, they’re closed off. They don’t know what to expect. They’re the ones sitting at the far end of the tent by themselves. And the (veterans) who have been here in the past, they see those guys, they know they’re struggling and they want to help.

“Our Vietnam vets that come, they see the younger generation who are fighting the same things they fought back when, and they go up to them and sit down and talk. It’s amazing how our older vets are stepping up and helping our younger vets.”

Lohman, a member of Yeager-Benson Memorial American Legion Post 199 in Harrison, Ohio, is the first mate with Circle Maker Charters and organizes all the charters for Walleyes for Wounded Heroes. Some of the charter captains are veterans, but all donate their time and boats at no charge. “Some of these charter captains are turning down close to $800 a day to go and do this for three days for these fellas as a sign of respect and ‘thank you,’” Lohman said.

Greg Freeze, a boat captain with the fishing charter business Walleye2go Sportfishing, has been volunteering with Walleyes for Wounded Heroes for six years. This year was the fourth time he’s been paired up with the members of Hotel Company.

“These guys served our country. To me, it’s the only way I’ve got to give back,” Freeze said. “I didn’t serve our country, so the only thing I can do is serve them. I look forward to this every year.”

After three days of fishing, Walleyes for Wounded Heroes culminates with a Thank You Celebration at Tall Timbers Campground in Port Clinton, Ohio. Members of the community came out to show their appreciation during the celebration, which included a meal, silent auction, vendors, music and the aerial delivery of an 1,100-square-foot U.S. flag courtesy of members of Team Fastrax, the world’s largest commercial skydiving team.

For Hughes, the Thank You Celebration was the culmination of a five-day stretch that provides “a sense of peace. That’s the biggest thing.”

But the Paid-Up-For-Life member of Post 407 in Lenexa, Kan., said The American Legion’s support for Walleyes for Wounded Heroes is an opportunity for the 100-year-old organization to make an impact on the newest generation of veterans.

“It’s good to see my American Legion (be a part) of events for the young (veterans),” Hughes said. “It’s all about them now. We want to hear their stories, not tell our stories.”