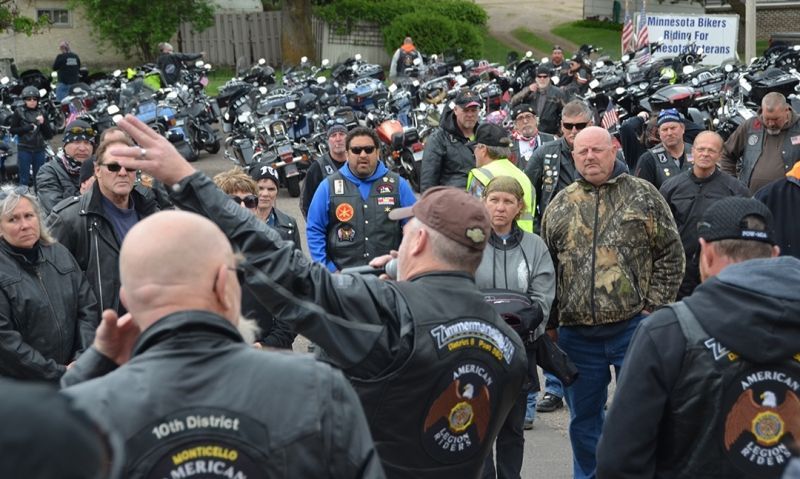 A little more than three years old, American Legion Riders Chapter 560 in Zimmerman, Minn., already has made a big impact in the Minnesota veterans community. A total of $50,000 in donations last spring to a state veterans home and three organizations that provide assistance to veterans battling post-traumatic stress disorder (PTSD) brought the chapter’s donation total since January of 2016 to more than $100,000.

But the chapter’s Riders aren’t slowing down. On June 2, following its annual Veterans Benefits Ride, Chapter 560 will present another $50,000 to various nonprofits helping veterans in the state. Last year’s ride brought in close to 100 motorcycles and nearly 200 participants.

When ALR 560 Director Steve Andersen chartered the chapter in December 2015 he applied for and was granted a limited state gaming license that allows the chapter to conduct multiple bingo events a year at various venues. The post also conducts raffles, including Coach purse events that raise thousands of dollars.

“In our group, I always feel like we’re trying to get better,” Andersen said. “Obviously we’ve had some success with things we’ve done. We’re going to try a couple new things this year on fundraising. We’re just trying to keep it fresh and keep people excited about what we’re all about.”

This year’s recipients are:

• Patriot Assistance Dogs, a training program that prepares dogs to assist veterans who have been diagnosed with PTSD, traumatic brain injury or a related psychiatric issue;

• 23rd Veteran, which assists veterans in their transition from military to civilian life through a positive reconditioning program;

• Beyond the Yellow Ribbon, a comprehensive program that creates awareness for the purpose of connecting servicemembers and their families with community support, training, services and resources; and

Project Delta, Patriot Assistance Dogs and Eagles Healing Nest all were recipients of $15,000 donations from Chapter 560 last year. Helping organizations that assist veterans dealing with PTSD is a mission near and dear to the chapter.

“We decided as a group … it would be nice to come up with ways to help veterans who are here that are struggling,” Andersen said. “I feel like it’s almost another casualty or another killed in action when someone comes back after serving and fighting … and they can’t deal with things and take their own life. Our group really is pretty passionate about taking most of our efforts that we do as a chapter and putting it toward that PTSD awareness, education, helping these guys, supporting these guys. We’re always looking for different opportunities to help with that.”