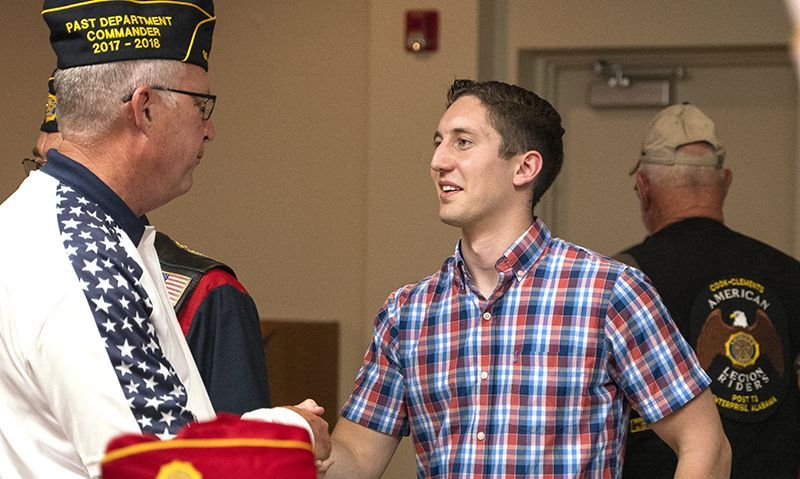 When asked why they take more than a week of their time – riding through rain, heat and wind during long days – to take part in The American Legion Legacy Run, most Legion Riders offer up the same response.

Since the first Legacy Run in 2006, the Legion Riders have raised millions of dollars for The American Legion Legacy Scholarship Fund, which provides college money for the children of U.S. military personnel killed on active duty on or after Sept. 11, 2001, as well as children of post-9/11 veterans with a combined VA disability rating of 50 percent or higher. Each of the past five rides have brought in more than $1 million “for the kids.”

During the 2019 Legacy Run’s closing stop Aug. 22 at Kenneth N. Dowden Wayne Post 64 in Indianapolis, the Riders had the opportunity to both meet and hear from two of those kids: Elek Wellman of Sherman, Ill., and Hannah Ramos of Romeoville, Ill. More than $292,000 was raised for those scholarships during this year’s ride, with much more to come from the floor of The American Legion National Headquarters.

Both college students at the closing stop had high praise for the men and women whose efforts provided scholarships to each of them.

“It meant a lot to me,” said Wellman, a second-year medical student at Southern Illinois University School of Medicine and graduate of Notre Dame. “It was nice knowing people were willing to help out (the children) of veterans. It really brings us in as a family, all the veterans helping each other. For me, it’s $70,000 a year going to a public school. The scholarship really helps me pursue medicine."

That pursuit came when Elek’s father Dan was injured while serving in the military. “A big part of becoming a physician was when my dad was hit by a mortar in Iraq,” Elek said. “He came home and was telling me about how such great doctors he had and how thankful I should be.”

Dan, a member of American Legion Post 32 in Springfield, Ill., served in both the Illinois and Iowa National Guard from 1987 to 2007. He served on extended active duty twice, first in Germany during Operation Desert Storm in 1991, and then in Iraq from 2004 to 2005.

“I think this says a lot about the Riders,” Dan said. “Veterans helping veterans is always significant. The amount of money they’ve raised through the years is just amazing. The fact they’re willing to give up a week of their lives to ride for students they don’t even know to meet their education needs, it’s tremendous.”

The third child in her family to go to college, Ramos said the scholarship came at the right time. “It was really scary financially,” she said. “To me, it’s like a miracle. I remember when I got my acceptance … I was ecstatic for the acceptance but so devastated when I found out I couldn’t afford it. So when I got (the Legacy Scholarship) it was amazing. I’m so blessed and grateful.”

Ramos is the daughter of Bernard and Lisa Ramos. Her father, a member of American Legion Post 18 in Lockport, Ill., served in the U.S. Army from 1997 to 2017, deploying twice to Iraq and once to Afghanistan among his six deployments. Bernard said his daughter receiving the scholarship was “humbling. It’s selfless. What a great way to support our servicemembers by extending the generosity to their loved ones.”

At the Legacy Run’s final stop, dozens of American Legion Family members from all over the country were on hand to greet the ride. The closing ceremony of the 2019 ride included praise from American Legion National Commander Brett Reistad, who spent the entire Run on the back of one of its motorcycles.

“Thank you for what you do. Thank you for continuing to serve,” Reistad said. “I’m honored I’ve been able to spend the time with you on this ride, and it gives me a whole new perspective on what you do. I think it’s a great thing for this organization to continue to support this program.”

Donations poured in during the ceremony, including $21,000 from the host’s Legion Family. For years Post 64 served as the starting point for the Legacy Run. Seeing the ride finish brought on a lot of emotions for longtime Post 64 Commander Kenny Hoffman.

“It sends chills over you,” Hoffman said. “To see them all come in and still have a smile on their face, and they’re so happy to be here – they love us, and we love to have them – and they do such a wonderful job for the veterans and education of the children. We embraced the Legacy Run the first year it started, and we thought it was such a worthy cause. You can’t help but to donate. We will continue for years to help.”

Another $6,000 came from American Legion Riders Chapter 239 in Worthington, Ohio, and American Legion Riders Chapter 43 in Naperville, Ill. Donations also came by way of a very special leather vest. Less than 10 years ago a group of Royal British Legion Riders took part in the Legacy Run. One of them, David Gibson, donated a vest to the ride that has, for the past six years, been auctioned off. A group of Legion Family members from Post 93 in Buchanan, Va., came up with a record bid of $3,300 to keep the vest for the upcoming year.

A view from a first-timer. Department of Indiana Southern Assistant American Legion Riders Director Jeff Everman took part in his first Legacy Run. Don’t expect it to be his last.

“I would do this again in a minute. In fact, I plan to,” said Everman, a member of Sons of The American Legion Squadron 64 in Indianapolis. “This is for a great cause. The camaraderie of the Legion Family group has been awesome. I had a great time.”

Everman said the ride gave him an opportunity to forge friendships he expects to last. “I made a lot of new Facebook friends from all over the United States,” he said. “We’ll keep in contact that way. I expect to see or talk to them a couple three times a year or more, and see them back here more than anything.”

The hospitality of the posts that hosted stops along the ride stuck with Everman. “You learn this being a part of the American Legion Family: no matter where you go, no matter what part of the United States … you are treated like family,” he said. “They’ve opened up their buildings. They’ve treated us like royalty. They treat us like family. You just can’t beat that.”

Cowley, a member of Post 45 in Galva, called the last day of the Run “a wind-down after what we do for eight to nine months to get ready for this,” and said that finishing up the ride brings a sense of satisfaction. “When we get into that last stop and everyone is safe, we’re relieved,” he said. “I don’t have the words to really explain what it feels like to make sure that what we’ve planned we can execute, and can make sure that everybody is safe and we get where we’re supposed to go in the time we’re supposed to get there. It tickles the devil out of me.”

‘Totally fantastic.’ The Run made its final lunch stop at Jefferson Post 9 in Madison, Ind., one more centennial post visited on this year’s ride. Members of the community and the post’s Legion Family greeted Riders along Jefferson Street and in the post parking lot, waving U.S. flags and cheering.

Forest “Mike” Hunt, who has served as the post’s commander eight times, was moved by seeing 200-plus motorcycles come to the post.

“I’m just blown away. It’s totally fantastic,” Hunt said. “I feel so blessed we got something like this come through here. And as far as I know, I think it’s the only time ever a national commander has actually visited our post. I know for the 20 years I’ve been here he’s come here.”

Also waiting for the ride at Post 9 was American Legion Auxiliary National Vice President Nicole Clapp, who rode from Indianapolis on the back of Iowa Legionnaire Pat “Doc” Phillips' motorcycle. The pair rode back to Indy with the ride.

Clapp said the Madison stop was the first opportunity for her to make it to a Legacy Run stop and then participate in the ride. “I think (the Legacy Run) is the true essence of why (the Riders) became veterans in the first place and dedicated their service to their country to take care of others,” she said. “This is a way they can continue to give back after their military careers have completed.”

Before leaving Madison, the ride stopped by Indiana Veterans Memorial Cemetery, where National Commander Reistad and members of Post 9 laid a wreath at the grave of Jefferson County’s Samuel Woodfill, Indiana’s only World War I Medal of Honor recipient.

And it took Sweet two days to get from his home in Mississippi to the start of the Centennial Ride in Texas. It was a lot of time on a motorcycle even before the Legacy Run began. But for Sweet it was worth it.

“I got to see some parts of Texas I’d never had to see,” Sweet said. “And I wanted to meet as many World War II members in the posts (along the Centennial Ride route) that had been there for 100 years, and what their posts looked like. And sure enough, most of them were the same buildings. They’ve kept them up. And the people were just super fantastic. It was awesome.”