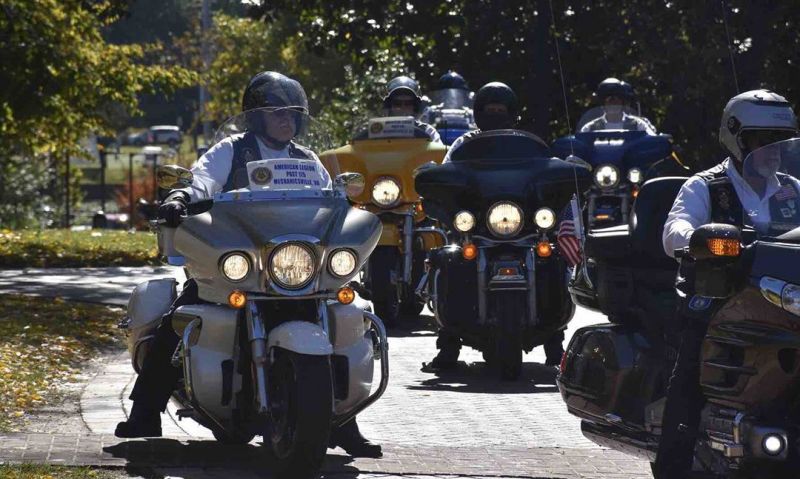 Heilman pass away Oct. 19 at age 93. He was a member of Maj. Charles A. Ransom American Legion Post 186 in Midlothian, Va., and took part in multiple Rolling Thunder events with the American Legion Riders and also rode on the 2015 American Legion Legacy Run.

Heilman’s motorcycle was placed outside the chapel, and American Legion Riders from Post 186 and other chapters rode their motorcycles to the chapel in a tribute to their fallen comrade.

“He was just … somebody to look up to just from his stories and you know, everything that he’d been through in his life,” Post 186 Legionnaire Gordie Holmes told The Collegian. “It was just great to know him.”

Heilman’s daughter, Bobbie Heilman Murphy, said when it was decided to place her father’s motorcycle outside of the chapel, she reached out to Post 186’s Legion Riders to see if they would attend the ceremony on their motorcycles.

“They immediately responded and said they would be there to do that, and it was such an honor for them to do that,” Heilman Murphy said. “It was amazing.”

A World War II Marine Corps veteran, Heilman fought at Iwo Jima and decades later rode 6,000 miles across the country, traversing 20 states, to bring awareness to the 70th anniversary of the end of World War II. Heilman served as a spokesman for The Greatest Generation Foundation and Spirit of ’45, organizations dedicated to honoring World War II veterans and honoring America’s Gold Star Families, families who have lost loved ones in combat.

In addition to serving as the University of Richmond’s chancellor since 1986, Heilman also served as the university’s president from 1971 through 1986 and again from 1987 to 1988.

And though Heilman didn’t become involved with the American Legion Riders until the final years of his life, his daughter said the bond that developed was a strong one.

“He really loved being around people who had been in similar situations that he had been in, and not only veterans, but riders,” Heilman Murphy said. “He so much enjoyed meeting and experiencing other people’s stories about (wars). He loved hearing their stories. He really loved hearing about other (veterans’) experiences in wars, whatever war it was.”

For more about Heilman’s relationship with the American Legion Riders, click here.