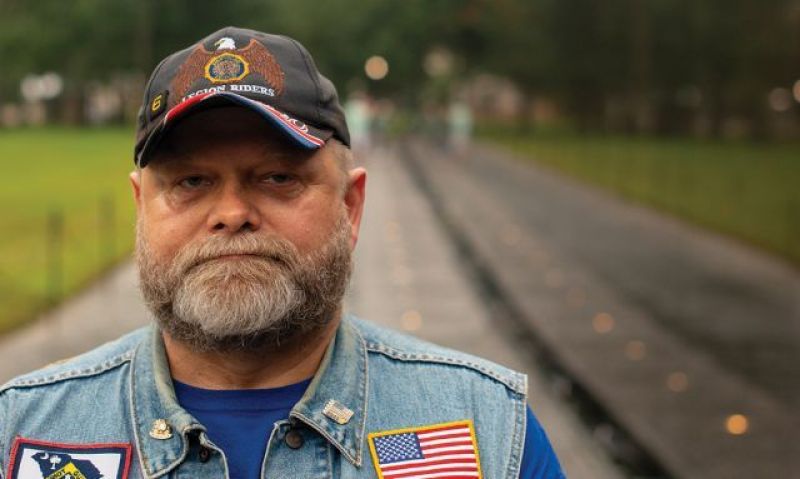 American Legion Riders Chapter 6 in South Carolina has raised $19,000 this year for the Legacy Fund. Chapter Director L.Z. Harrison said the coronavirus wasn't going to get in the way of the chapter's efforts. (Photo by Schelly Stone)

With the coronavirus forcing the cancellation of the 2020 American Legion Legacy Run – what was supposed to be the American Legion Riders’ 15th annual national fundraising ride – alternative plans have formed at the national and department level.

Nationally, the donation period for the 2020 Legacy Run has been expanded, while a new tiered donation program for The American Legion Legacy Fund also has been implemented.

While a handful of American Legion departments were able to conduct in-state Legacy Runs, following social distancing in the process, other departments have been forced to either cancel or postpone theirs until at least this fall.

South Carolina had conducted an in-state Legacy Run every year since 2012, raising more than $440,000 for the Legacy Fund. But the coronavirus forced the postponement of this year’s April ride to Oct. 24, along with scaling the ride back from two days to one.

But L.Z. Harrison, past state director and current state secretary of the South Carolina American Legion Riders, said even the fall in-state Legacy Run could be altered to a virtual ride or having chapters do their own ride if COVID-19 numbers start to peak in the state.

But that hasn’t stopped Harrison’s Richland County Chapter 6 ALR from continuing to raise money for the Legacy Fund, which provides money to cover college expenses for children whose parents are U.S. servicemembers who died while on active duty on or after Sept. 11, 2001, or whose parents are post-9/11 veterans with a combined Department of Veterans Affairs disability rating of 50 percent or greater.

“I went out to all our normal donors and said, ‘Look, we can’t do a ride right now, but that doesn’t take into account that these children still need help with their education,'” said Harrison, Chapter 6’s director. “Our chapter alone, we collected $19,000. That is only through donations, through the members donating themselves and our corporate donors that we have.”

The expansion of American Legion Legacy Scholarship eligiblity to the children of disabled veterans in 2016 has made soliciting donations easier for Harrison and Chapter 6. Since then, 188 scholarships totaling $3.2 million have been awarded through the fund. “I’m able to use those numbers to show corporate donors, as well as individuals, how the fund is getting used and how much it’s being utilized by the children of our disabled or fallen heroes,” he said.

Harrison and some other Chapter 6 Riders recently also provided an escort to longtime member Bernie Shankman, who passed away in February and was interred in Arlington National Cemetery in late July after a delay because of the pandemic. Harrison said Shankman, 96, was beloved by his fellow American Legion Riders; to memorialize the 32-year Legionnaire, Harrison had made “In Memory of Bernie Shankman” patches that are available for purchase in order to benefit the Legacy Fund.

“I wanted to have something to remember (Shankman),” Harrison said. “And he enjoyed the Legacy ride as well. It’s special for us to donate money in his honor.”

Even with the possibility of an in-state ride still months away, Harrison said his ALR chapter wasn’t going to stop its fundraising efforts. “We can’t say, ‘Well, this year we can’t help you out because of COVID.’ We have to continue pushing forward and doing the best we can, even though we wouldn’t do a ride,” he said. “It’s important to us to ensure that we donate money so these children will have a chance at a higher education.

"These families have paid a sacrifice, whether it’s the ultimate sacrifice or whether a parent is disabled from their military service. They paid a sacrifice to their nation, so we can’t forget their children.”

As the Legacy Run donation period continues, we want to share stories similar to that of Chapter 6’s in American Legion national media. If your chapter, district or department has found alternative ways to raise money for the Legacy Fund – or if you’re able to use traditional ways to bring in donations for the fund – please let us know. Email sbrooks@legion.org with the details of your efforts. We’ll follow up with you and feature those efforts on www.legion.org and via social media.