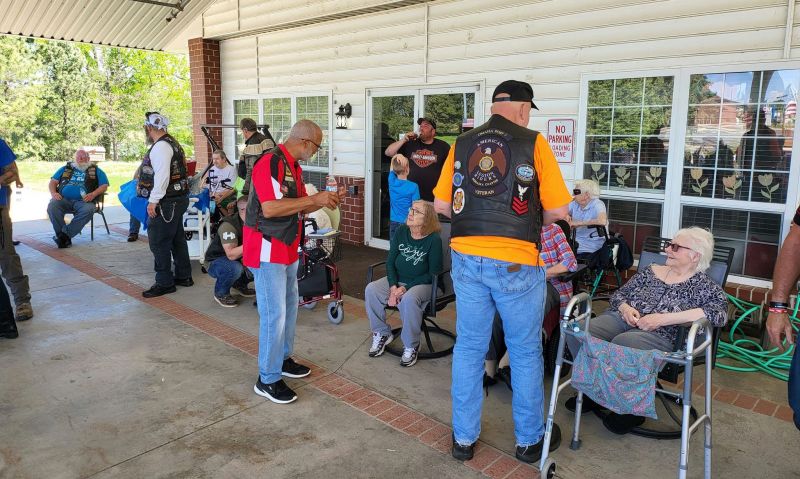 In 2017, American Legion Riders from Benson Chapter 112 in Omaha, Neb., started the Thank-a-Veteran Tour, visiting five area retirement and assisted-live facilities, talking to and thanking the veterans residing there.

But as word spread of the Riders’ efforts on the north side of Omaha, requests started coming in to expand the tour.

Knowing the logistics of hitting both the north and south sides of the city would be difficult, Chapter 112 instead created a second ride, in 2021 debuting the Thank-a-Veteran Southern Tour. Dozens of Riders completed the second such tour May 14, visiting veterans living at the Eastern Nebraska Veteran's Home and at Heritage Ridge in Bellevue, and The Waterford at Woodbridge in Plattsmouth. The Northern Tour will take place June 11.

“Due to the popularity of the tour on the north side of town, we had requests to come down into Nebraska City and further south, and it was just too far to do them all in one day,” said Chapter 112 Director James Keyes, the Sons of The American Legion Squadron 112 commander and SAL District 8 commander. “Last year was the first year we did this southern route, where we went to Nebraska City, Plattsmouth and two locations in Bellevue. And now that we’ve gone that southern route, we’ve got a Lincoln (ALR) chapter, a Louisville chapter of Riders that joined in with us, and the Plattsmouth chapter.”

Keyes said the Riders regularly have provided escorts to fallen servicemembers’ remains being returned home, as well as veterans who have passed away. “After years of doing that, we decided maybe we should make an effort to see these people and spend some time and thank them for their service prior to their passing,” he said. “So where available, we would track down these senior residences where veterans live.”

The visits were 20- to 40-minutes long per location and done face-to-face inside the facilities. But COVID-19 forced the Riders to adapt; the past two years the tours have altered to meet with the residents outside wherever possible.”

Keyes said the visits leave the aging veterans “very excited. They’re very appreciative. They’re happy to see us. A lot of residents don’t get visits from their own family. So to have basically random strangers show up with a smiling face to say ‘hello’ means something to them.”

Keyes said this year a Legion Rider from Dubuque, Iowa, heard about Chapter 112’s tours and came out to ride with the tour – and to visit his mother, a resident at Heritage Ridge. “That was nice,” Keyes said. “She’s going to turn 90 years old in a couple weeks, and we’re going to try to go back there. (Her son) is going to give her a ride on the back of her Harley on her 90th birthday.”

For Keyes, the visits give him a chance to thank others for their service and provides a way to honor the legacy of members of his family

“It’s feels great for me, especially as a Son, because my why for joining the Sons was basically to honor my grandfather and father the way I should have when they were here,” Keyes said. “I regret not having these conversations with them. I regret not having behaving better as a teenager, and not appreciating them more for their sacrifices and their efforts. It feels great to me.

“I organize it and I participate in it. And it’s really nerve-wracking leading a group of 20, 30, 40 motorcycles through town. It’s a lot of responsibility. But once I’m (at the residence) and I’m shaking hands and talking, and they’re just thanking me and saying how wonderful it is just to see us and have someone take the time, it’s really fulfilling.”

Save
Tags: Legion Riders, Honor & Remembrance, Sons of the Legion