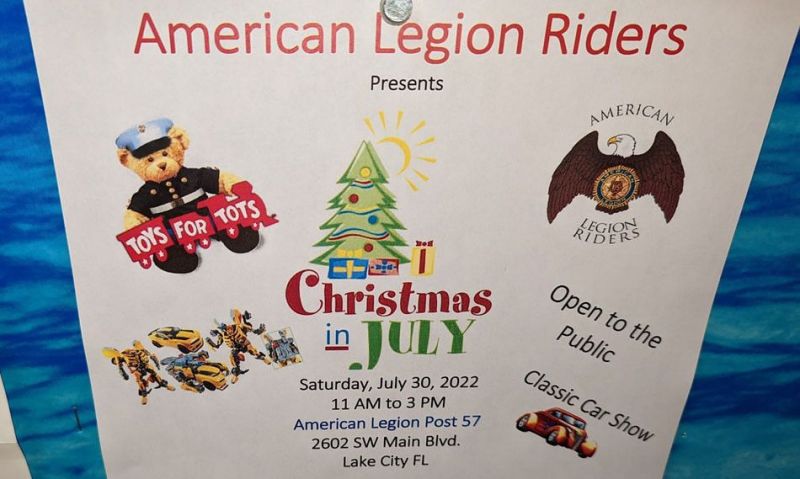 Last spring, flooding hit the Columbia and Suwannee County Toys for Tots chapter’s collection center at the Florida Gateway Fairgrounds in Lake City. News reports had more than 50 boxes of donations being ruined, along with damage to the center itself.

When nearby American Legion Riders Chapter 57 learned that a charity it has supported for years was in trouble, it developed a plan to assist. And that plan turned into another large fundraiser conducted by the chapter.

Since 2018 – with the exception of 2020, when the pandemic canceled the event – Chapter 57 has staged fall fundraisers for Toys for Tots, raising around $40,000 in the process. Another one is planned for this year, but after hearing about the loss of toys due to the flooding, the chapter wanted to do something else: Christmas in July for Toys for Tots.

“(Toys for Tots) lost about $3,000 worth of toys, and we wanted to help them replenish that,” said ALR Chapter 57 Director Bill Huggins, who also serves as Post 57’s first vice commander. “It’s a popular program in the community. Its coordinator (Inga Dwyer) is really well known in the community. She told me we helped 3,500 children last year. And it gives us a chance to get out and ride. It’s one of the Four Pillars. We do a lot of other things, but Toys for Tots is the most prominent thing we do.”

Planning for this year’s fundraiser started in May and included delivery of 165 meals at $10 each to local car dealers to feed their employees on the day of the event. While delivering the meals, members of Chapter 57 also picked up toys donated there.

Volunteering during the event were 44 Post 57 American Legion Family members, who served meals while conducting multiple auctions. Close to 400 toys, stocking stuffers and books also were collected on the day of the event. The chapter also was able to pick up sponsorships to help defer the fundraiser’s cost.

Union County JROTC students provided the posting of the colors and also helped with set-up and clean-up. A classic car show also took place throughout the event.

Tallying everything up and subtracting expenses, Huggins estimates around $8,000 was raised to donate to Toys for Tots.

“We were hoping to have 10 gift baskets for our auction, and we had one donor come through with 10 baskets by himself,” Huggins said. “We got a lot of buy-in in the community. (WCJB) Channel 20 picked it up and ran it on the news.”

Huggins is quick to credit organizer Lisa Dye, a fellow Legion Rider and president of Auxiliary Unit 57, for putting together a successful event. “She stepped up and agreed to chair the event and organize the event,” he said. “And this was one of our best-organized events. The lines of communication with everyone were very open and very clear.”

And while the fundraiser was a Legion Riders event, Huggins said he and all of the other Riders are American Legion Family members first.