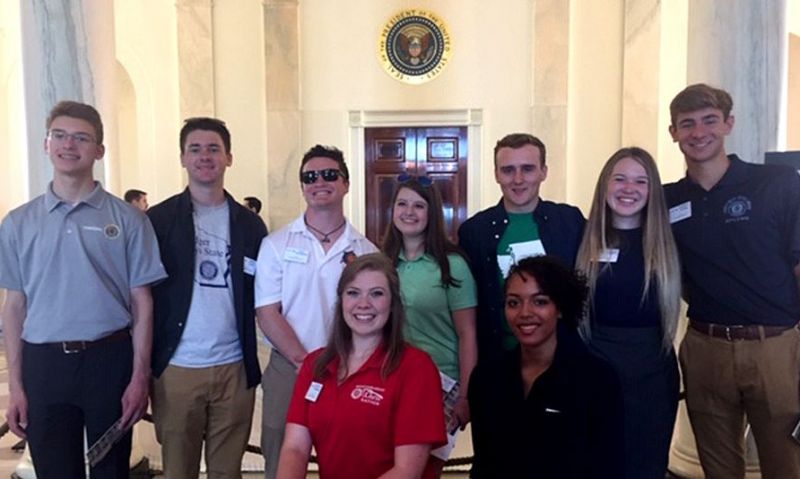 A visit to the White House started the morning off June 6 for the nine Samsung American Legion National Scholars who are being honored in Washington, D.C., for their achievement of receiving the $10,000 scholarship last year. It was the first time many of the scholars had been inside the home of the U.S. president.

Rebecka Denney of Duchesne, Utah, found the White House to be “breathtaking” and that the visit was “definitely an amazing experience,” she said. “I feel like this whole tour (the past two days) has just been angled to our group. It’s so cool all the unique things that’s happened for us.”

Before departing for home, the scholars also visited The American Legion’s office in D.C. where they had lunch and heard about the lobbying efforts the organization does on behalf of all veterans and servicemembers.

“This trip has been really awesome,” said Garrett Geidel of Camden, Del., who will be attending the University of North Carolina in Chapel Hill this fall. “Being able to interact with other kids who have a similar mindset to me, not all of us actually going into the same career path, but we have a lot of the same ideas about how America should be and what we can do as Americans to serve our country in different ways. I am very grateful for the opportunities the Samsung American Legion Scholarship has afforded me, and will continue to afford me for the rest of my life.”

Geidel’s grandfather, who made him eligible for the scholarship, served stateside in the Coast Guard during the Korean War. Geidel said receiving the scholarship has shown his grandfather the long-term impact his service is having on today’s youth.

“In some ways I don’t know if he was proud of his service personally, not that he wasn’t proud of the military, but that he didn’t necessarily make much of an impact. So I think being able to see that (his service is) affecting me and it’s helping the future generations, it really gave him more of a value to his service. And that’s something tangible for him,” Geidel said.

When asked about the highlight of their trip, the scholars agreed the reading of the names of the fallen from Operation Overload at the National World War II Memorial was the most impactful and seeing the Samsung office was at the top as well.

“I am incredibly grateful for the generosity of Samsung and The American Legion for organizing this amazing opportunity for us and for honoring the sacrifices of so many brave men and women," Denney said.