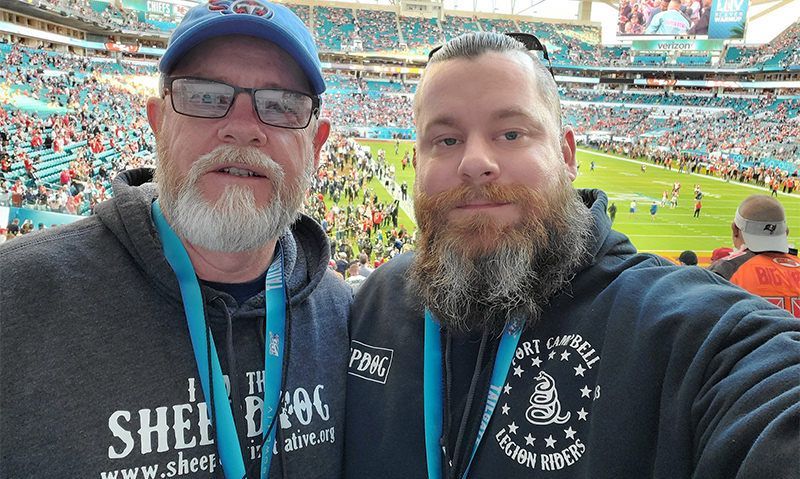 While millions watched on TV as Kansas City rallied past San Francisco in Super Bowl LIV, a pair of Legionnaires were able to watch the game in person. Dustin Maxfield was chosen to attend the game, thanks to The American Legion, USAA and Tennessee Titans quarterback Ryan Tannehill as part of USAA’s Salute to Service program.

What already was going to be a special weekend for Dustin was even more so because he was able to share it with his dad. “It was something we both didn’t take for granted,” Dustin said. “We understand a lot of people aren’t even able to spend the game watching it on TV with their families. We kept that in mind the entire time, and just really soaked it up and appreciated it for what it was: father and son, both veterans, getting to spend this once-in-a-lifetime opportunity together.

“That was probably the best part of it: being able to hang out and do that together.”

After arriving in Miami on the Friday before the game, the pair was able to spend time at the NFL Experience and then USAA’s Salute to Service Lounge. On Saturday, Dustin and his father attended a meet and greet with Tannehill and then walked the red carpet into the NFL Honors awards ceremony, where they saw Tannehill receive the Comeback Player of the Year award.

On Sunday before the game, they attended a special tailgate that included food and music. “Once we got inside the gates and got something to eat … that’s when it kind of hit us: ‘Oh man, we’re getting ready to walk into the stadium and watch the Super Bowl together,’” Dustin said. “And then we watched the game from our really good seats.”

Maxfield – who was medically discharged from the U.S. Army in 2017 after suffering injuries to his legs, head and neck during a nighttime training operation – hasn’t let his injuries slow him down in the civilian world. In addition to serving as Post 233’s vice commander, Kentucky’s District 2 vice commander and the department’s POW-MIA chairman, he’s also the founder of the nonprofit Sheepdog Initiative. His organization’s programs include providing comfort items and camaraderie to veterans transitioning from homelessness, raising awareness of post-traumatic stress disorder and veteran suicide, and raising funds to purchase service dogs for veterans with PTSD and traumatic brain injuries.

While Maxfield said the weekend was a whirlwind at times, it was an experience he and his father will never forget. “It was awesome,” he said. “USAA and The American Legion sure know how to make a couple guys feel special.”