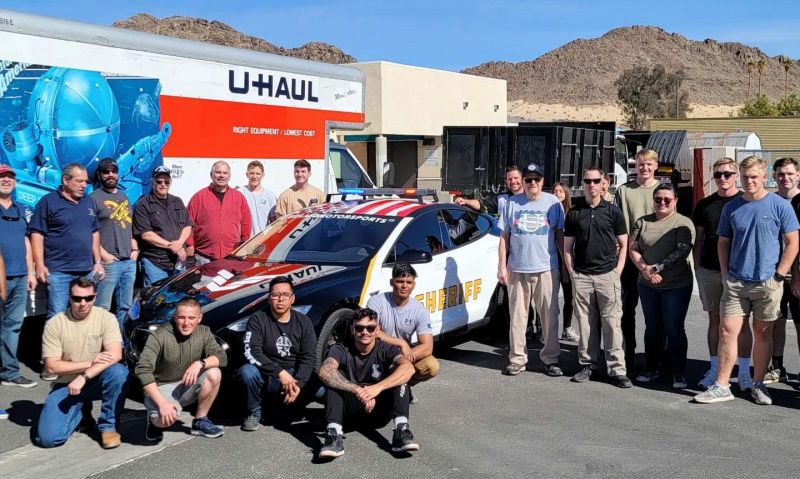 When members of the San Dimas Masonic Center and the San Dimas Rotary Club reached out to American Legion Los Angeles Sheriff's Star Post 309 in early January about assisting a troop-support effort for the military families at Marine Air Ground Task Force Training Command and Marine Corps Air Ground Combat Center in Twentynine Palms, the post responded with a yes.

“The Masonic Lodge frequents Twentynine Palms, and they help supply their pantry – especially for the junior enlisted (Marines). So, this is an annual recurring thing that they do,” said Bille, a lieutenant with the L.A. County Sheriff’s Department. “So, when they told me about it, I said ‘OK, we’ll help out. But I said, ‘Be ready, because our response is always large.’”

Bille and the rest of Post 309 lived up to their word. On Valentine’s Day, members of the post’s American Legion Family delivered two trucks and three SUVs filled with food, baby products, diapers and numerous donations to the base.

“When they saw what we were capable of, they were overwhelmingly happy,” Bille said. “It was a great project, as far as timing to start off the new year on the right foot. We’re service-oriented anyway. It was just in keeping with what we do. This is why we’re here.”

It’s standard operating procedure for Post 309 to work in tandem with the sheriff’s department, of which around two-thirds of the post’s members are current employees. The two entities teamed up in early December to provide World War II veteran Warren Bauder with a drive-by caravan for the veteran’s 100th birthday.

Bille said it’s important to support those serving at Twentynine Palms, especially the junior enlisted Marines and their families at a time when the current inflation rate in the United States is the highest it’s been in 40 years.

“With the cost of inflation, everyone’s been feeling it,” Bille said. “They haven’t had a raise in some time. And they’ve had like 50 babies born within the past year. They’re the ones who benefit the most out of this.”