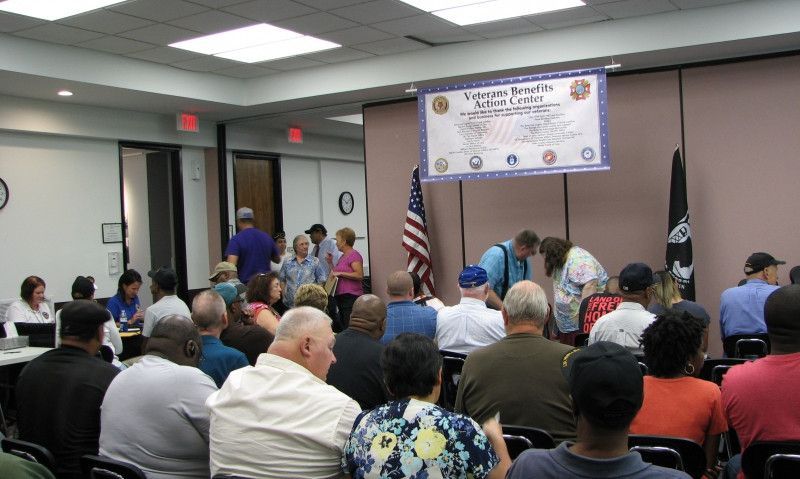 In 2015, the American Legion Department of North Carolina began staging what it called Veterans Benefits Action Centers (VBAC) throughout the state, bringing veterans needing benefits assistance and other help face to face with veteran service officers from all over the state, as well as staff from the Veterans Health Administration, Veterans Benefits Administration and the Vet Center program. Veterans could check on the status of pending VA claims and file new ones on the spot. Some received VA disability ratings while at the centers; the results were millions of dollars in VA benefits awarded through the centers.

Hurricane Florence put a halt to Post 67’s plans for 2018 just days before the VBAC was scheduled to take place. The effort resumed in 2019, with more than 1,300 veterans receiving assistance.

And then came the pandemic, which shut down Post 67’s VBAC plans in 2020 and again in 2021. But recognizing the value of the center, Post 67 is planning to provide a venue for veteran assistance in March of this year. On March 17-19, the Herbert Young Community Center in Cary will serve as the site for the Veterans Benefits Live – VA in My Hometown.

Post 67 Commander Richard Spyrison, who coordinated the previous VBACs in Cary, again is organizing this year’s event. A former post service officer, Spyrison said having to go the past two years without providing an opportunity for veterans to get face-to-face help on a large scale was a hard but needed decision.

“It was horrible. We wanted to do it so bad,” Spyrison said. “The need is there. That was the biggest factor. But safety-wise, the VA was on lockdown. Everybody was very cautious and scared as to what was going on. So we didn’t have it. But we wanted to.”

Veterans attending will have the opportunity to:

· File a new claim with the VA.

· Ask questions about VA appeals or benefits to which they may be entitled.

· Get assistance facilitating and expediting existing claims and appeals.

“There’s going to be more visibility from the VA (at this event). All three entities are going to be present,” Spyrison said. “We’ll have the benefits side and the health side, and the (National Cemetery Administration) will be there. We’ll have people from the homeless side of the VA. Suicide prevention is going to be there. We’re going to have legal aid. We’ll have representatives from the Elizabeth Dole Foundation for caregivers. We’ve got a whole slew of support people for veterans. I think it’s going to be a little bit bigger this year.”

All veterans planning to attend are asked to bring the proper documentation about their case, including their DD 214; all medical records related to their disability, both military and civilian; and dependency documents if new or not already provided to the VA. Those attending are asked to be patient, as wait times could be long.