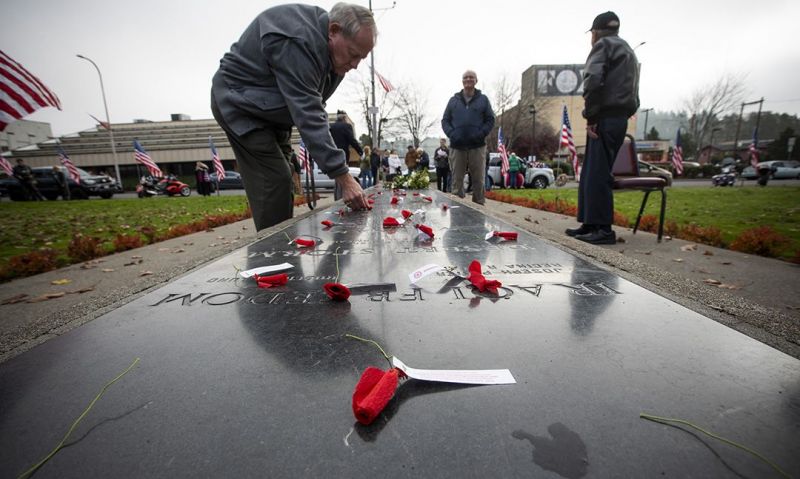 Gunshots that killed four members of The American Legion a century ago still echo through the memories of the southwest Washington town of Centralia. But people who gathered to mark Veterans Day near the monument to the fallen Legionnaires are determined not to allow the events of Nov. 11, 1919, to define their community.

“One hundred years ago today, on what was then called Armistice Day, there was bloodshed in these streets as conflict erupted between members of the Industrial Workers of the World and American Legion,” said William Anholt, commander of Grant Hodge American Legion Post 17, as he opened the ceremony in George Washington Park in Centralia’s town center. “Historians will debate the causes of this conflict and assign blame, but that is not why we are here today. Today, we honor all veterans of the armed services, these countless men and women who swore a solemn oath to support and defend the Constitution of the United States against enemies foreign and domestic.”

Keynote speaker Ron Averill laid out the history of Veterans Day and noted its special significance for Centralia, where one of the state’s first American Legion posts was chartered in March 1919. He also touched on the events that permanently marred the community’s first Armistice Day celebration. As the last of the participants in that day’s parade drew close to the IWW Hall in downtown Centralia on Nov. 11, 1919, a group of unarmed Legionnaires broke ranks and rushed the Wobbly office. Gunfire erupted. Legionnaires Warren O. Grimm, Ben Casangranda and Arthur McElfresh were killed. Another Legionnaire, Dale Hubbard, was fatally shot a short while later as he pursued Wesley Everest, a member of the IWW – also known as the Wobblies. Everest, who also was a veteran, was captured. Later that evening, he was pulled from the jail and lynched by vigilantes who have never been identified.

The Wobblies who were captured and tried argued they were acting in self-defense. Eight men were convicted of second-degree murder in connection with the shootings. One of them, however, was determined to be insane.

A former Lewis County commissioner and university professor, Averill served two tours in Vietnam during his 30-year military career. During his remarks, he also spoke about the challenges of recruiting people to join America’s all-volunteer military when the economy is strong and jobs are plentiful. “We have a duty to make sure our young people learn about what the armed forces do and the role they play in securing our freedom,” Averill said.

Monday’s event drew local residents, Legionnaires from throughout Western Washington – including Commander Steve West and Adjutant Dan Halverson from the recently revived American Legion Post 25 in Kelso – and a cross-section of veteran motorcyclists, including Legion Riders, the Combat Veterans Association and the Christian Motorcycle Association. The Centralia High School band performed and representatives from several organizations, including the Moose, American Legion Auxiliary and Knights of Columbus, laid wreaths near the bronze statue of a World War I soldier called The Sentinel that is dedicated to the four slain Legionnaires.

Peter Lahmann, president of the Lewis County Historical Society and a lifelong Centralia resident, says the tragedy still haunts his hometown. “It’s left a cloud over the community for 100 years,” Lahmann says. “The families of the Legionnaires were devastated. The wives and children of the IWW who were jailed were devastated. It’s a terrible thing all the way around.”

Yet, the topic was never discussed when Lahmann was growing up. He thought he’d get answers when he took his first job, at 16, working for a glass shop formerly owned by Bernie Eubanks, a Legionnaire who took a bullet in the leg while marching in the Armistice Day parade, and his partner Carl Dickey, who also was a veteran. “I asked Dickey about it,” Lahmann says. “He said, ‘We don’t talk about it.’”

Louis Stoffer, who has been a member of Centralia Post 17 since 1945, encountered similar silence. “I knew a lot of the guys who were involved in it,” says Stoffer, who flew 35 missions as a B-17 flight engineer in World War II and then came home to join his father in the heating and cooling business. “They sure didn’t want to talk about it. It was a blot on Centralia.”

The Centralia conflict unfolded while The American Legion was holding its first national convention in Minneapolis. It erupted against the backdrop of the Red Scare – sparked by the Russian Revolution as well as labor strife that invariably involved the IWW. By 1919, Centralia was home to a flourishing timber industry, with six lumber mills and other wood-products manufacturing. Tensions between the IWW and mill owners were high long before that first Armistice Day parade began. “The local community did a raid on the IWW local in 1918,” Lahmann says. “The Legion was not involved.”

The friction with the IWW ultimately took six lives in 1919. A woodsman named John Haney was shot a few days after the Armistice Day parade by one of the groups hunting for IWW members who escaped. Haney, who was helping one posse, was supposedly accidentally killed by members of a second posse, Lahmann says. Haney’s grandson – a World War II veteran – told Lahmann no one was charged with his grandfather’s death because the men who shot him mistakenly thought he was a Wobbly and so it was considered justifiable homicide. Haney left a widow and 10 children.

Even today, there are distinctly different versions of how the Armistice Day altercation transpired. “Everybody who’s put pen to paper on this has a different take,” Lahmann says. What is the truth? “I personally believe we’re never going to know,” Lahmann says. “The people who were there are gone.”

Until recently, Lahmann believed the Legionnaires were gunned down in the street. New information, including trial transcripts that were given to the Lewis County Historical Society by an anonymous donor about a year ago, have him doubting that narrative. For example, there is evidence members of The American Legion kicked in the door of the IWW Hall, he says. However, Lahmann doesn’t fault the Legion for the tragic events of Nov. 11, 1919. “The Legionnaires involved were pawns of the big business community who thought, ‘We’ve got to run these dirty unions out of town,’” Lahmann says.

Army veteran Bob Guenther, president of the Thurston-Lewis-Mason County Labor Council, drives that last point home. “The American Legion was not responsible for the tragedy that took place,” Guenther said while touring a pop-up museum Lahmann set up in a historic building much like the long-since demolished hotel that housed the IWW Hall. “As president of the Labor Council, I want to heal as many of these wounds as I can.” That effort dates back 20 years, when he helped organize the first Centralia Labor Day picnic since the 1919 tragedy. And Guenther invited members of American Legion Post 17 to open that picnic.

Meanwhile, Lahmann’s efforts to help heal the divisions in the community included proposing a second monument in Washington Park giving an account of the IWW side of the story that would have been erected in time for Monday’s events. However, disagreements over wording on the proposed memorial derailed the project. Today, he tries to look at the Centralia Tragedy as an intellectual exercise. “Learn from the lessons of the past and don’t repeat them.”

Read about the widow of Legionnaire Warren O. Grimm here.