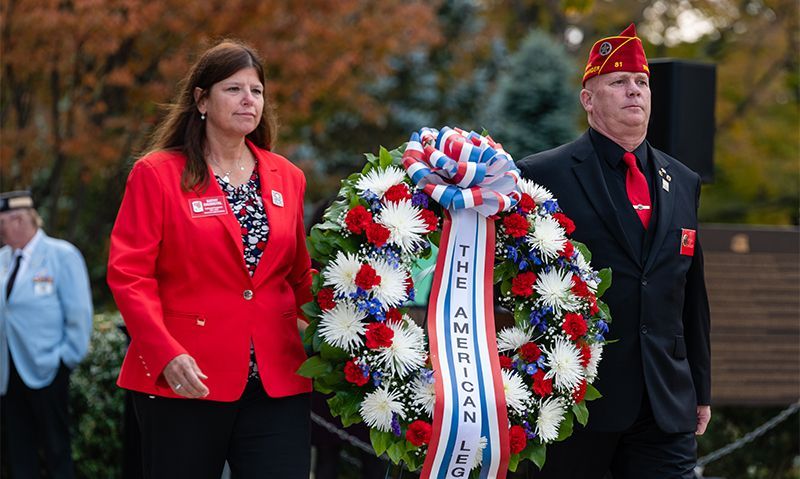 Since the armistice between the Allied nations led by the United States and Germany went into effect on Nov. 11, 1918, veterans across the world have paused each year on the date that has been recognized as the end of the “war to end all wars.”

This year, Legionnaires were among the distinguished guests in the nation’s capital who came to reflect on the service of those who came before them, and those who have followed.

“From the beginning of our fight for independence at Lexington and Concord to the end of the longest war in American history, in Afghanistan, millions of veterans have risked their lives to preserve the democratic ideals of this great nation,” McDonough said. “We live in peace and prosperity today because of them and because of you.”

Biden addressed veterans, families, caregivers and advocates gathered in the Tomb’s amphitheater, and spoke to their service and sacrifices.

"You've come through the trials and testing, braved dangers and deprivations, faced down tragic realities of war and death,” the president said. “You've done it for us. You've done it for America. To defend and serve American values. To protect our country and our Constitution against all enemies. And to lay a stronger, more secure foundation on which future generations can continue to build a more perfect union."

Biden spoke of his late son, Beau, who served in the Delaware Army National Guard and deployed to Iraq.

“We have one truly sacred obligation,” he said.

“To properly prepare those and equip those who we send into harm’s way and care for them and their families while they’re both deployed and when they return home. This is a lifetime sacred commitment. It never expires.”

Biden pledged that his administration will continue to work with lawmakers to honor that obligation, including expanding presumptive conditions for toxic exposure and particulate matter, prioritizing mental health care, and ensuring the growing population of women and LGBTQ+ veterans receive appropriate services and support.

“We lay wreaths. We renew our oaths. We stand in solemn awe of such fidelity. Because for us to keep faith with American veterans, we must never forget exactly what was given to us, what each of them was willing to put on the line for us,” the president concluded.