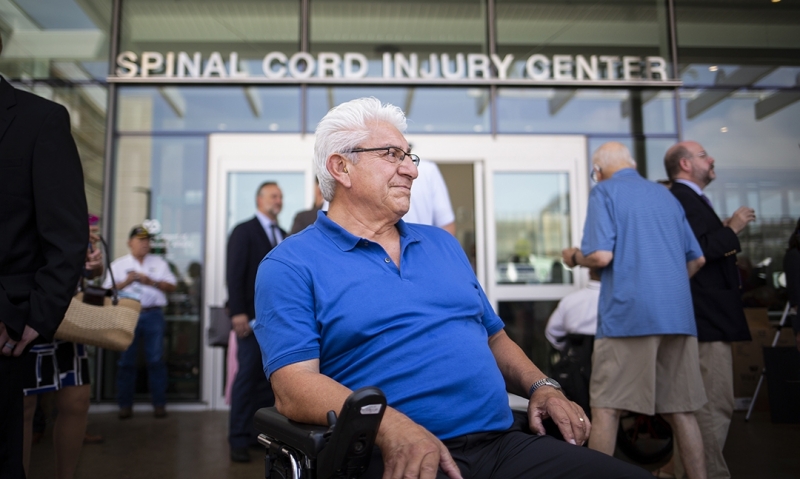 After more than two decades of debate, controversy, disappointment and unrelenting persistence from The American Legion in Colorado, the Department of Veterans Affairs finally cut the ribbon at its new Rocky Mountain Medical Center on July 21. The upbeat ceremony drew hundreds of veterans, families and politicians to the sprawling Aurora campus where the long-troubled and nearly-canceled facility will finally start treating patients. Many Colorado veterans thought they would never live to see the day.

“This is a story of perseverance," said Ralph Bozella, a Colorado veteran and chairman of The American Legion's national Veterans Affairs & Rehabilitation Commission. "This is a story of people not giving up, of keeping the faith in good times and during those dark times when things were not going so well."

Four U.S. presidents and eight VA secretaries have come through the federal government since veterans first proposed a new VA medical center at the site of the former Fitzsimons Army Medical Center in 1995, Bozella noted. “But isn’t that the sweetest fruit of victory – to know that all of our hard work and perseverance truly was for something?”

Bozella lauded the efforts of the United Veterans of Colorado – which represents about 400,000 veterans – veterans service organizations and the state’s congressional delegation, particularly U.S. Reps. Ed Perlmutter and Mike Coffman. Perlmutter is a Democrat whose district included the new hospital site from 2007 to 2012, when redistricting made it part of Republican Coffman's territory. “No matter who was seated in the House or Senate throughout the 23-year period since 1995, they were in full support of us," Bozella said. “We would not be here today without them.”

The 1.2-million-square-foot Rocky Mountain Regional VA Medical Center replaces a weary 70-year-old hospital near downtown Denver that packed as many as four patients at a time in the same hospital room. The new facility includes a much-needed spinal cord injury and illness center, first of its kind in the region. But the spinal cord center will have only 30 beds instead of the 50 that then-VA Secretary Anthony Principi promised in the early 2000s. “When the ribbon is cut, those beds will be full,” Artie Guerrero, a Vietnam veteran at the forefront of the effort to get the center, said at the ceremony. “Are they ready to confront that challenge?”

The new medical center also lacks the PTSD treatment center and nursing home that were eliminated when a frustrated Congress insisted on cuts after the cost of the medical center ballooned from approximately $600 million in 2009, to more than $1.7 billion today. Both remain at the old hospital site until VA can find the means to build those facilities in Aurora. “How’s that going to feel to a veteran who is suffering from PTSD – to be shoved in the corner of an old building,” said American Legion Past National Commander Tom Bock, a longtime proponent of the new medical center.

Perlmutter noted the missing PTSD center during his remarks at the ribbon cutting. “Mr. Secretary O’Rourke, we’ve got a plot of land on this campus that still needs a PTSD treatment facility,” he said. He also thanked veterans for their tireless advocacy and never giving up on the project.

The veterans community had ample reason for despair. VA turned down an offer of free land at the Fitzsimons site after the federal government decided to close the Army hospital, which was built in 1918 to treat World War I veterans. That was followed by various proposals that alternated between a stand-alone VA hospital and health-care facilities shared with the University of Colorado Hospital. VA eventually settled on a standalone hospital and paid $60.4 million for 31 acres at Fitzsimons.

That was followed by other issues that came to a head in December 2014, when the prime contractor, Kiewit-Turner, walked off the job after the U.S. Civilian Board of Appeals ruled VA breached its contract. At that point, Kiewit-Turner had used $100 million of its own money to keep the project moving because VA, plagued by cost overruns, had run out of money. By the summer of 2015, it appeared that Congress might not come up with hundreds of millions of additional dollars to finish the Denver hospital. Colorado veterans staged a demonstration just west of the troubled construction site and, with the help of the state’s delegation, Congress found short-term funding to help keep work going.

“This represents the largest construction failure in the history of the VA,” Rep. Coffman said.

Coffman led the charge in Congress to mandate that the U.S. Army Corps of Engineers take charge of the project about three years ago. Without that crucial change the new medical center would not have been completed, Coffman said.

In a brief press conference before the ribbon cutting, Acting VA Secretary O’Rourke deflected repeated questions about whether anyone at VA would be held accountable for the hospital construction project running $1 billion over budget and five years behind schedule.

The Denver-area hospital is the last of four new VA hospital construction projects launched in the 2000s as the agency scrambled to deal with aging veterans from earlier wars and a surge of troops returning from the conflicts in Iraq and Afghanistan. The new VA medical centers in Las Vegas, New Orleans and Orlando also took longer and cost more than anticipated, but none broke the budget like the sprawling new hospital in Aurora that one critic compared to a shopping mall. Each time Congress or the VA wavered, however, Legionnaires and other veterans mobilized – whether it was with protests, visits to Congress or threats to start digging the new hospital foundation themselves. The latter gave rise to lapel pins depicting a shovel with the letters BTDT on the blade, which stood for Build the Damn Thing.

“I’m pleased they are getting to the end of this road,” said Bock, who designed the lapel pins and used them to raise $3,000 in donations for a future new Fisher House. Overall, the cost of the new hospital is too high. “But we can’t let them walk away – there are too many veterans who need this facility.”

Bock first proposed the VA build a replacement medical center at the Fitzsimmons site in 1995, when he served on an advisory committee mapping the future of the Army hospital site. He had no idea what lay ahead. “This was a full marathon, not a 10k. But I wasn’t going to give up,” Bock said. Now that it’s nearly finished, “I'm optimistic that it’s going to be good – because we’re going to make it good.”

He and other veterans pledge to keep a close eye on the medical center as it fills with staff, equipment and patients here over the next few months. Outpatient services were set to begin by July 28 and inpatient treatment coming Aug. 4.

Among other things, the Legionnaires remain concerned that VA will not be able to hire enough doctors and nurses given the number of medical centers in the area competing for talent. “Instead of Build the Damn Thing,” Bock joked Saturday, “I’m going to be saying, ‘Staff the Damn Thing.’"