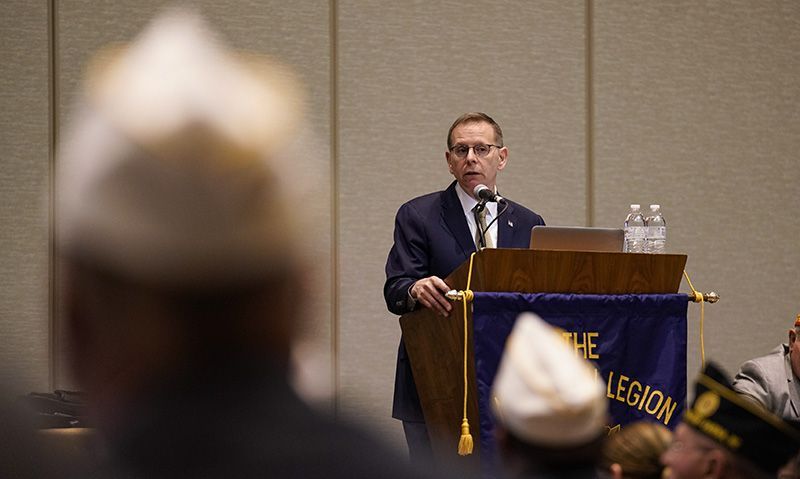 Dr. Paul Lawrence, Under Secretary For Benefits, U.S. Department of Veterans Affairs speaks to attendees during the the VA&R Commission. (Photo by Ryan Young)

Implementation earlier this summer of the VA MISSION Act has created “an exciting time” for the Department of Veterans Affairs – specifically the Veterans Health Administration.

The reason for that excitement was shared with The American Legion’s Veterans Affairs and Rehabilitation Commission on Aug. 24 by Dr. Steven Lieberman, VA’s Principle Deputy Under Secretary for Health. Lieberman talked the MISSION Act, as well as VA’s women veterans healthcare and suicide prevention efforts, during his presentation at The American Legion National Convention in Indianapolis.

“It’s a time of big change for us,” Lieberman said. “We are working hard in VA to become what is called a ‘high-reliability organization.’ We want VA to become the safest healthcare system in the country. We want to prevent errors, and when an error does occur that it does not lead to harm.”

The MISSION Act will provide VA to deliver “anywhere to anywhere” care legally across state lines, Lieberman said. “We can fairly quickly start taking care of patients remotely,” he said. “Veterans wanted more choice. So if the wait time in primary care and mental health is over 20 days, or in specialty care over 28 days, we are going to give a veteran the option to go out for their care.”

Increased access to community care isn’t going to transform VA from being a federal agency. “We are not privatizing. That is not our goal,” Lieberman said. “Our goal is to keep strengthening within.”

On the women veteran front, Lieberman said that veteran population is the fastest growing; VA currently serves approximately 510,000 female patients. Creating an environment in which those women feel safe and secure is a priority for VA.

“We hear that some (women) veterans don’t want to come to the VA,” Lieberman said. “We are constantly talking to women veterans to get their input on this. We heard at one VA in Virginia that they all, as they describe it, ‘dress down.’ They put on a baseball cap, a sweatshirts, jeans, because they think that helps them to get a decreased amount of unwanted comments. This is primarily coming from veterans.

“This is something that we’ve been working on since 2017, but it’s clear to me that we still have not made enough inroads when we’re hearing that our female veterans are afraid to walk into the main hospital.”

Lieberman said efforts have been made to get VA staff comfortable if they hear something from a veteran saying inappropriate comment, “that it’s OK to go up to them and say ‘please sir, we all are welcome here. That is an unwelcome comment. Please don’t make that comment.’ It’s really important to get that word out.”

Suicide-prevention efforts in the veteran community need to be collaborative. “Everybody’s got a responsibility with this,” Lieberman said. “That’s why it’s important to talk about it.”

Lieberman said there is a misconception that suicide is triggered mainly by a mental health issue. “Certainly that’s an issue with many of these suicides,” he said. “But suicides, the reasons for many times are not because of a mental health disease. Suicides are complex. There are maybe one or more reasons why someone chooses to (use) suicide. And we don’t have all the answers. Nobody has all the answers.”

Stressors such as financial difficulty, divorce and difficulty with transitioning into the civilian world can trigger suicidal thoughts and actions. Another, Lieberman said, is social isolation – something that he said The American Legion can assist with.

“If somebody loses their spouse, or moves, they go into isolation,” Lieberman said. “They don’t have that (prior) support system … and they suddenly are very lonely. We believe if you can get them involved in a veteran service organization … get them involved in something … this is just such an important aspect.”

The commission also got an update on Project Atlas, a collaboration between The American Legion, Philips Healthcare and VA. Philips is placing video communication technologies and medical devices in selected American Legion and VFW posts to enable remote examinations through a secure, high-speed internet line. Veterans will be examined and advised in real time through face-to-face video sessions with VA medical professionals, who may be located hundreds or thousands of miles away.

VA”s Kay Burnett, a primary care provider, said she sees patients both in-person and via telehealth. “Being able to have access to a space within a whole community where my veterans, my patients, can go and see me, versus having to come all the way into the facility is a great advantage,” she said. “Yes, there’s still appointments that we want them to come into the facility to, but there’s also appointments that I can see folks in their homes and in their home communities.”

VA’s Lesly Roose said Project Atlas also benefits those veterans in areas where cell connection can be spotty. “What Project Atlas is for those areas where you don’t have really good cellular connectivity,” she said. “I personally live in a rural area. I struggle with bandwidth sometimes at my own house, so I know what this can be like … Project Atlas will bring that connectivity to a local area where you can go.”

Dr. Paul Lawrence, VA’s Under Secretary for Benefits, briefed the commission on implantation of the Veterans Appeals Improvement and Modernization Act, and on the status of benefits for Blue Water Navy veterans.

On the latter, Lawrence said that while the Procopio v. Wilkie decision extending disability benefits for Agent Orange exposure to Blue Water Navy veterans won’t go into effect until Jan. 1, 2020, work already is underway regarding those claims.

“We are processing and doing development (of claims) now,” Lawrence said. “The law requires the benefits go into effect on Jan. 1. We will grant on Jan. 1 for those folks.”