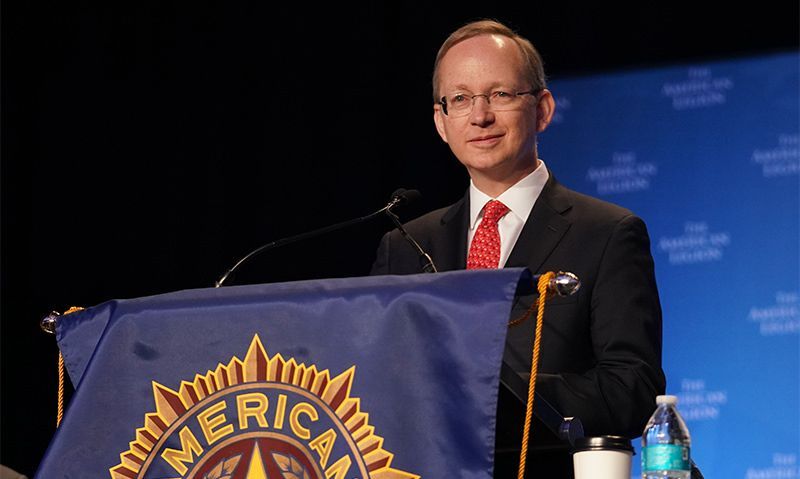 On the stage during the Washington Conference’s Commander’s Call, American Legion National Commander Bill Oxford praised the relationship between the nation’s largest veterans organization and consumer electronics giant Samsung. That relationship included a $5 million donation from Samsung 25 years ago to establish the Samsung American Legion Scholarship. The collaboration has awarded more than $6.5 million in college scholarships to 2,308 applicants since its inception.

Some of the 2019 scholarship recipients were on hand during the Commander’s Call and were recognized by Oxford and the packed hall. The recipients had been in Washington, D.C., since last weekend, attending breakfasts and dinners, touring the capital’s monuments and heading to Capitol Hill to meet with their representatives and senators.

Also at the Commander’s Call was Dr. David Steel, executive vice president and head of Corporate Affairs for Samsung Electronics America. Steel said that along with Samsung’s business success has come a strong sense of responsibility – and a sense of obligation to America’s veterans.

“There’s probably no company that owes more to those who have served this nation than Samsung,” Steel said. “Coming out of the ashes of the Korean War in 1953, South Korea was in a very difficult situation. And then when the company was founded years later, it was thanks to the security relationship between the United States and South Korea that has endured all those years, that has allowed us to grow and become the sixth most-valuable brand in the world.”

Steel said that Samsung – which was presented The American Legion Patriot Award in 2013 – has “a profound sense of gratitude, and we tried to pay that back by investing here in the U.S. With more than 40 years of doing business here, we’ve invested $32 billion, and we have 20,000 Samsung colleagues working all across the country.”

Samsung’s vision of giving back, Steel said, is “Together for Tomorrow! Enabling People.” A way to do that, he said is through investing in education. Among Samsung’s worldwide educational programs is the Samsung American Legion Scholarship, which is open to high school juniors who attend either The American Legion Boys State or American Legion Auxiliary Girls State program, and are a direct descendant or a legally adopted child of a wartime U.S. military veteran who served on active duty since Dec. 7, 1941.

“Our first major grant in support of education was to The American Legion,” Steel said. “We are delighted that you have so successfully operated the Samsung American Legion Scholarship program since 1996. Thanks to your stewardship of the endowment … more than 2,000 descendants of American veterans have been supported with scholarships to pursue college degrees.

“We hope that through our support for the scholarship and the amazing winners that we have every year … that we’ll show our appreciation for all your service and for all of their families’ service to this country.”