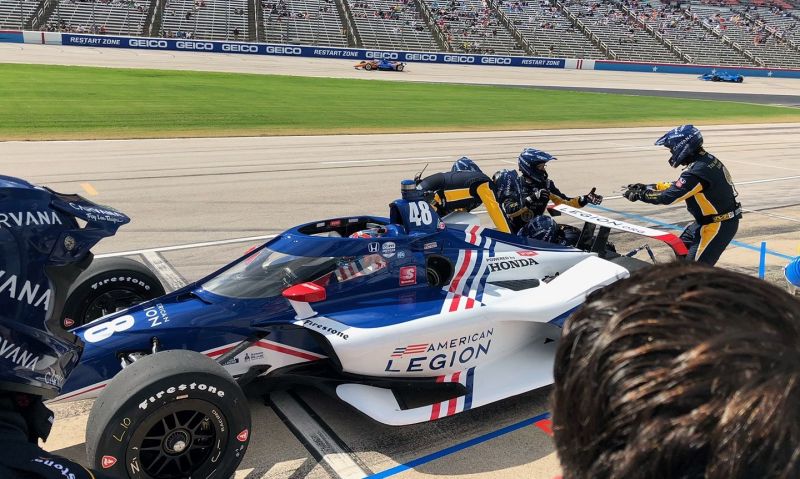 A doubleheader at the Texas Motor Speedway (TMS) put Tony Kanaan on the track for the first time during the 2021 NTT INDYCAR Series – including in the Chip Ganassi Racing No. 48 car that features The American Legion as the primary paint scheme.

Some bad luck got in the way of Kanaan making a serious charge at winning either the Genesys 300 or the XPEL 375. But the 2004 INDYCAR Series champ was able to show both in practice and in the two races the potential his pairing has with Chip Ganassi Racing – and with “The Greatest Spectacle in Racing” less than a month away.

Kanaan had the fastest lap in practice at 220.173 mph at TMS on May 1, but a rain delay forced the cancellation of qualifying for both races and resulted in the starting lineup for both races to be determined by season points standing.

That pushed Kanaan, who hadn’t raced prior last weekend while teammate Jimmie Johnson drove the No. 48 car on road courses in the opening two races, had to start the Genesys 300 in the back row. He wound up 11th, pushing him up to 20th for the start of May 2’s XPEL 375.

But on the opening lap, a six-car wreck happening right in front of Kanaan and took Alexander Rossi, Pietro Fittipaldi, Sebastien Bourdais, Dalton Kellett, Ed Jones and Conor Daly. Kanaan was momentarily pinned against the wall but managed to continue, though he had to pit and lost three laps on the rest of the field. The result was a 15th-place finish for Kanaan, who was realistic about his chances in the race after the unfortunate start.

“It’s not the day we wanted, but it was completely out of our control,” Kanaan told CGR IndyCar on Twitter. “The outcome of that is not qualifying hurt us a lot. And that put us back for two races. And when you start in the back, anything can happen.

“I was just a passenger on that crash. I actually think we got lucky … we were able to continue to give some of The American Legion guys some laps. But once you start the race three laps down, there’s not much you can do.”

Last winter The American Legion and Chip Ganassi Racing entered into a multi-year sponsorship agreement for the No. 48 Honda in the NTT INDYCAR Series. Johnson, a seven-time NASCAR Cup Series champion, is driving a No. 48 car featuring American Legion branding prominently in its paint scheme during this season’s road races; in his first two INDYCAR races, Johnson drove the car to 19th- and 22nd-place finishes.

Kanaan is competing in oval races and was glad he was able to get through the opening wreck in the XPEL 375 to get as much track time as possible. “I’m a fighter,” he said. “I wanted to go through the pit stops and everything. It’s important for a new team like this.

Both Johnson and Kanaan get a bit of a break as the INDYCAR Series takes this weekend off. Up next for Johnson is the GMR Grand Prix in Indianapolis, an 85-lap, 207.32-mile event that uses portions of the Turns 1 and 2 of the Indianapolis Motor Speedway (IMS).

Qualifications are May 14, while the race will take place at 2:30 p.m. ET May 15 and will be shown on NBC. For a complete schedule and viewing options, click here.

Kanaan, meanwhile, heads to IMS for the Memorial Day weekend Indianapolis 500, a race he won in 2013. Practice for the 500 starts May 18, while qualifications are scheduled for May 23 and will be broadcast on Peacock. The race is Maya 30, with television coverage beginning at 11 a.m. ET on NBC. For a complete race weekend schedule, click here.

“Jimmy will hopefully have a better race in the (GMR Grand Prix, and I’ll get ready for the big one,” Kanaan said. “Hopefully we took the bad luck out of the way.”