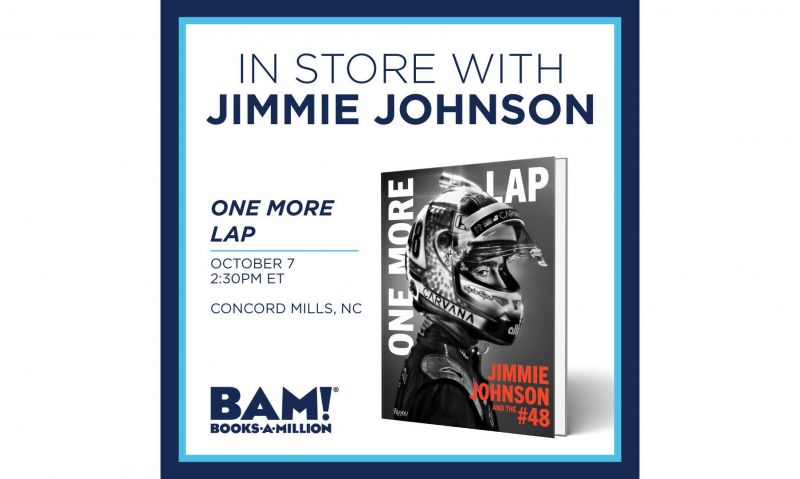 American Legion members in the Charlotte area or heading to this weekend’s Bank of America ROVAL 400 at Charlotte Motor Speedway can meet Jimmie Johnson at a book signing on Friday afternoon.

Johnson will be signing copies of his book, which was just released last week, titled “One More Lap: Jimmie Johnson and the #48.” The book signing will be Friday beginning at 2:30 p.m. Eastern time at Books-A-Million at Concord Mills Mall, 8301 Concord Mills Boulevard, Concord, N.C.

Johnson will sign for the first 100 fans who must purchase a book to get in line. Those fans can bring a second item as well to be autographed.

For those unable to make it to Books-A-Million on Friday, the book can be purchased through Amazon.com and JimmieJohnson.com upon its release, Oct. 11.

The seven-time NASCAR Cup Series champion who won 83 victories in NASCAR Cup was already a racing legend before he switched gears to INDYCAR after he retired from full-time NASCAR competition in 2020.

Johnson’s amazing career has been chronicled in the coffee-table sized book, “One More Lap,” that features some of the finest photographers in the country. It is published by Rizzoli with a price of $48 – Johnson’s car number that he made famous in both NASCAR and INDYCAR.

“One More Lap” by Jimmie Johnson with Ivan Shaw is a photo-biography of the legendary race car driver that starts with his childhood years racing motorcycles, buggies and trucks, then follows his NASCAR years where he achieved unparalleled fame, and shares his newest endeavor with INDYCAR racing.

The book has epic photos from the top sports and lifestyle photographers of the races (finishing line, victory lap, fans in the stands, celebrations in the pit, etc.), but there are also behind-the-scenes photos of race prep and family photos, coupled with stories and remembrances from a legendary career that is still going strong.

“It was so interesting to watch the 15 photographers come to the track, and all look at it through a different lens,” Johnson said. “It’s really a passion project for all involved.”

The forward is written by Michael Jordan, considered one of the greatest athletes of the 20th Century from his legendary basketball career with the Chicago Bulls and Washington Wizards of the National Basketball Association and at the University of North Carolina. Jordan is a longtime fan of Johnson and the two have become friends.

Johnson said he was shocked to realize how big a NASCAR fan Michael Jordan was. He sent Jordan a text to ask if he would write the forward and he said yes.

“I’m hoping everybody can come by and have a chance to buy this book,” Johnson said during an appearance on NASCAR Race Hub on FS1.

Johnson was live in the FOX Sports studio Wednesday in Charlotte.

“It’s a lifetime of pictures,” Johnson said. “I love photography. My wife has a gallery here in Charlotte and through her, I met a lot of great photographers.

“It’s really a great book, and I’m hoping people get a chance to pick one up.”

The book includes some family photos from Johnson’s early years of racing in the Southern California desert.

“Seeing the old photos and seeing my parents, my dad is fit and my mom, it’s really great to see those old photos and having that trip down memory lane in those old photos,” Johnson said. “We had this old 70’s van, a camper trailer, and another trailer with the toys on it. I don’t even know how legal it was to drive this thing down the highway, but I road in the camper.”

Johnson also spoke of his options for 2023, which could include a partial INDYCAR schedule, the 24 Hours of Le Mans, IMSA Sports Car racing and a few NASCAR races.

Justin Marks, owner of Trackhouse Racing, expressed his interest in putting Johnson in one of his NASCAR Cup Series cars for a few races next season.

“I’ll see what fits into my schedule for next year,” Johnson said. “The one race I really want to run is the 24 Hours of LeMans. The one I really haven’t done is LeMan so that is really on top of my list.”

Johnson said the one win he has come close to, but hasn’t achieved, is victory in the Rolex 24 at Daytona.

Since Johnson left the NASCAR Cup Series at the end of 2020, eight different drivers have won their first NASCAR Cup race. One of those drivers is 2022 Daytona 500 winner Austin Cindric of Team Penske.