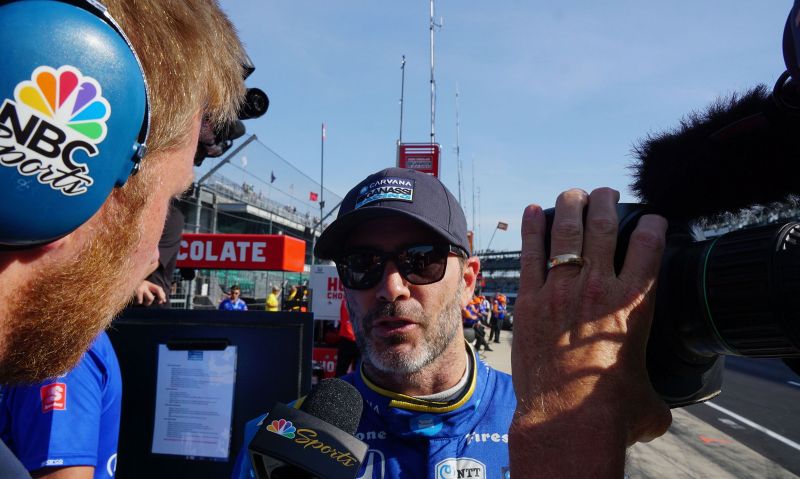 Opening Day for the 106th Indianapolis 500 proved to be a great day for The American Legion drivers at Chip Ganassi Racing.

Jimmie Johnson, who is the centerpiece of The American Legion’s NTT INDYCAR SERIES program and carries the major associate sponsorship on his No. 48 Carvana Honda all season long, was the third-fastest driver in Tuesday’s opening day of practice at the Indianapolis Motor Speedway.

Johnson mastered the art of running in “Happy Hour” – when the shadows of the massive grandstands cover the frontstretch, in recording his fastest lap of the day at 227.722 miles per hour.

Tony Kanaan, who carries full sponsorship from The American Legion on his No. 1 “Be The One” Honda at Chip Ganassi Racing, was ninth fastest at 226.922 mph.

“Obviously, a lot of drafting and stuff, but we worked on race stuff and I’m happy,” Kanaan said. “Andy Brown, my engineer, is sick so we have Chris Simmons today. We worked together a long time ago at Andretti and he was my engineer here my first year at Ganassi. It felt good. The team is strong.

“Chris is just filling in until Andy gets back.”

Kanaan said he was not 100 percent happy with his car, but it’s just opening day.

“We have a lot of work to do, and this is just day one,” he said. “We have three more days before qualifying so we have plenty of time.

“This is a big deal to be back with The American Legion because of the cause. Be the One and try to save lives with the veterans fighting mental health, this gave me a different meaning to come back to the Indianapolis 500. This is very special.”

Takuma Sato of Dale Coyne Racing with RWR was the fastest driver of the day, knocking off 2008 Indianapolis 500 winner Scott Dixon at the very end of the session. Sato’s fast lap was 228.939 miles per hour. Dixon’s best lap at 227.768 mph in the No. 9 PNC Bank Honda for Chip Ganassi Racing.

“Our goal is to have all five Chip Ganassi Racing cars in Sunday’s Fast Six,” Kanaan said. “We had our annual kickoff dinner last night. That would be a dream. Let’s see if we can do that.”

By contrast, this is Johnson’s first, although he won four Brickyard 400 NASCAR Cup Series races at the Indianapolis Motor Speedway.

That was in a stock car, a much different racing machine than what Johnson is in now in the NTT INDYCAR SERIES.

“Everything here is new for me, and we are working through the big picture things,” Johnson said. “We aren’t sure if we will get on track tomorrow (possible bad weather) and we wanted to close the loop on a few touching items we had from the open test in April.  We’re doing it with the shotgun spray right now, trying to narrow it down to what works for me.

“All in all, a really good day. Where we ended in this session now gives me a lot of confidence moving forward. It was nice to be out there on my own in my own environment, then we put some stickers (new tires) on the car and spent the last 20-25 minutes running in the pack.”

Johnson loves the experience, but realizes he has 13 days of track time left building up to the 106th Indianapolis 500 on May 29. “I’m loving it, enjoying it, a great group of people,” he said. “I’m savoring every lap I run around this place getting ready for the race.”