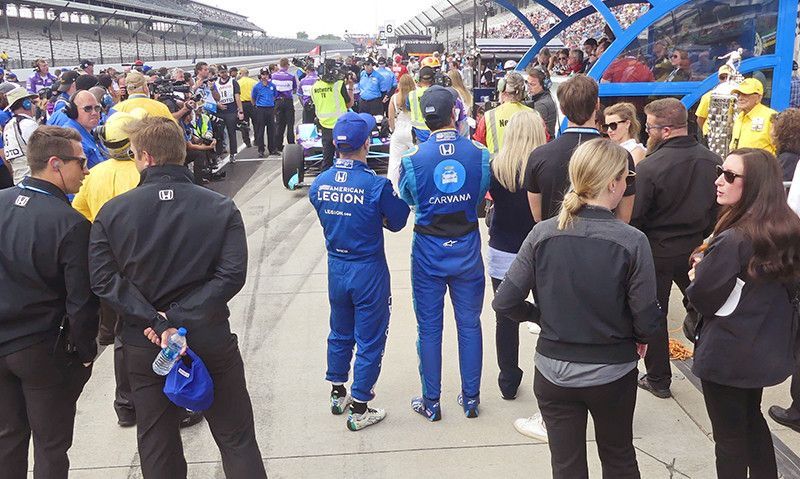 Chip Ganassi Racing had all five drivers in Sunday’s Fast 12, with four drivers advancing into the Fast Six in qualifications for the 106th Indianapolis 500.

By the time qualifications were completed, Scott Dixon turned the fastest four-lap average speed in history for an Indianapolis 500 pole winner at 234.046 miles per hour. The previous record was 233.718 mph set in 1996 by Scott Brayton.

Arie Luyendyk set the all-time four-lap qualifying average speed record of 236.986 mph in 1996, but his run came on the second day of qualifications and wasn’t eligible for the pole.

“Have you got any clean underwear that I can use?” Johnson asked. “That was close. You don’t know what grip you are going to have until you get to the center of the corner. We were on the aggressive side of our settings, and I didn’t have enough to hold the car but kept it out of the wall.

“I just tried to get back in the rhythm and do the best I could over those final three laps. When I agreed to do this a year ago, I thought there might be a bumping opportunity. After I watched what Will Power went through last year, I prayed that I didn’t have to go through that mess. It’s a very successful qualifying session. Of course, we want more, but that’s racing.”

Johnson believes he got just a tad overly aggressive on his setup but is confident that he will have a successful Indianapolis 500 on May 29.

“Since I was a kid racing dirt bikes, my dad told me, just have fun,” Johnson said. “I’m having fun. I can feel this building. I felt that last year as a spectator and this year as a driver, I can’t wait for next Sunday.”

Johnson’s race strategist, Blair Julian, believes what Johnson has been able to accomplish in his first Indianapolis 500 attempt has been remarkable.

“He got a little out of shape there and that scrubbed some speed, but saved it and had an impressive run,” Julian said. “From what we’ve done so far this month, we’re in good shape for the race.

“It’s super successful. It’s impressive that he can jump in there and do what he’s doing. We’re looking forward to next Sunday and the Indy 500.”

Kanaan delivered for The American Legion by advancing into the Fast Six.

“Big pressure, but we got the car in the first two rows and that is important. We got all five cars in the top 12 and that is what Chip Ganassi calls one team.”

Kanaan was impressed with Johnson’s big save, but was a bit concerned because that’s the same setup he had in his car.

“I thought, ‘is that what I have to look forward to?’” Kanaan said. “But he made a big save.

Johnson and Kanaan will both participate in the Monday’s full-field practice at the Indianapolis Motor that runs from 1 p.m. to 3 p.m. Eastern Time.

Kanaan and Johnson have both given The American Legion tremendous exposure so far at the Indianapolis Motor Speedway. There is more to come next Sunday in the 106th Indianapolis 500.

“Ganassi and the Legion have a pretty good team and we are doing our part by putting it in the front,” Kanaan said. “When you run in the front, it’s easy to promote.

“I can’t thank the Legion enough. Obviously, what a great cause – ‘Be The One+’ – trying to save lives for the veterans. Seventeen veterans take their lives every day because they don’t want to ask for help. Hopefully, we’ll get the message out.

“I’m convinced we have good cars, so let’s see what is going to happen in the race.”