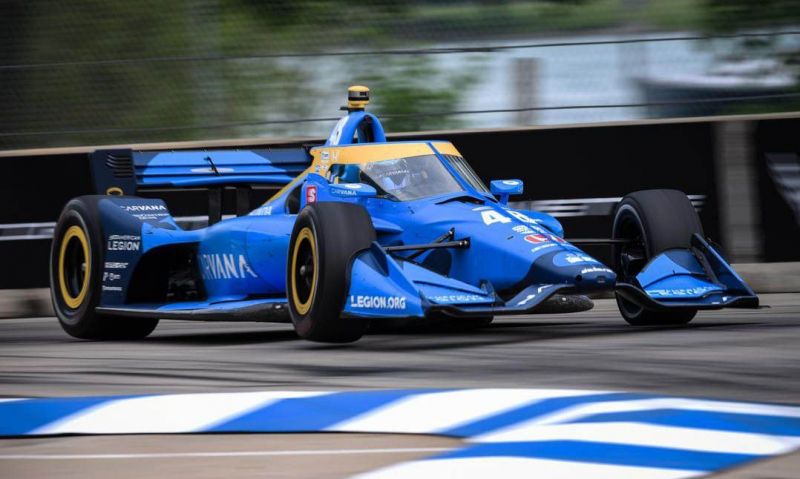 Next year, the race moves to the streets of downtown Detroit on a new circuit that will include Jefferson Avenue and the General Motors Renaissance Center.

Johnson’s No. 48 Carvana/American Legion Honda at Chip Ganassi Racing had minor repair when the driver spun in Sunday’s morning’s warm-up session and just barely damaged the nose of the car when it hit the barrier. The nose was replaced, and Johnson started the race in 22nd position.

That’s where he finished, two laps down to race winner Will Power of Team Penske.

“We drove back to pit lane, so that’s a positive,” said Johnson’s race strategist Blair Julian. “Obviously, a tough track around here that’s bumpy with tight corners. He did a good job.

“This course and St. Pete are pretty tough for these guys. The stints he ran were pretty good. They were consistent fast laps. He got some tire buildup, where he had to get offline when he was getting passed. That’s to be expected and he managed it well.”

Johnson believes he took a step forward in terms of competitiveness, although the results don’t show it on the bumpy track.

“They are all tough, but this track is tricky, for sure,” Johnson said. “Once I could into a rhythm, I could run a fast pace and I’m proud of that. Getting going on new tires, pit ins and pit outs, I’m losing too much time.

“But once I get into a rhythm, I’m running a good pace and I’m proud of that.”

The final race on the 2.35-mile, 14-turn road course is one that Johnson got to race on twice in his career.

As for the race, Power was able to manage the softer Firestone “Red” tires on his final stint while the other drivers lost grip on the Reds. Power’s race engineer, David Faustino, decided to flip the script and save the Reds for last.

Power was able to maintain his lead over the final two laps to keep Alexander Rossi from closing at the end. The victory helped make up for last year’s heartbreak, when Power’s engine did not re-fire after a red flag had stopped the race.

Chevrolet scored its 100th IndyCar Series victory since its return to the series in 2012 and a Team Penske driver won the race that is owned by Roger Penske and the Penske Corporation.

“All In all, I’d call that a Storybook day,” said Penske Corporation CEO Bud Denker, who is also the Chairman of the Chevrolet Detroit Grand Prix.

It was a grand farewell to old Belle Isle, which has seen some of the quirkiest and goofiest events take place on this island that a Michigan State Park located in the Detroit River between Detroit and Windsor, Ontario.

Past National Commander James W. "Bill" Oxford of Lenoir, N.C., was the Legion's VIP guest for the weekend.