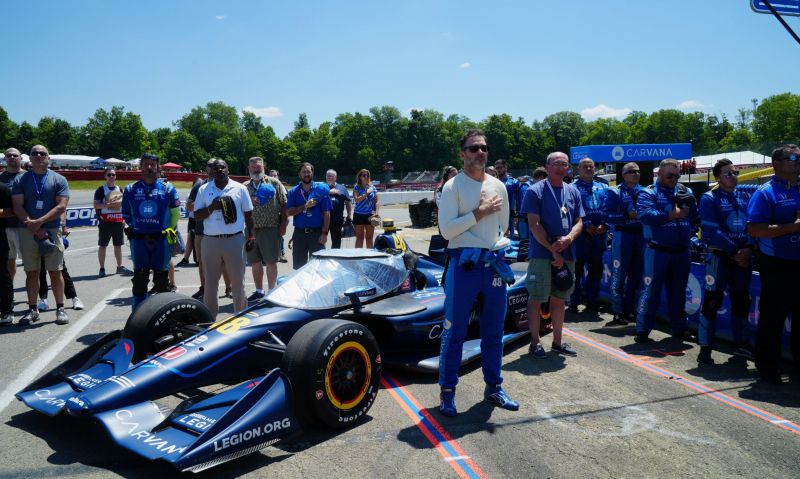 Jimmie Johnson pauses for the national anthem prior to Sunday’s Honda Indy 200. Johnson drove the No. 48 Honda, which featured a brand new American Legion livery, to a 16th-place finish. (Photo by Bruce Martin)

Jimmie Johnson got a head-start on his “Fourth of July” celebration with the best road race of his career in Sunday’s Honda Indy 200 at Mid-Ohio Presented by the All-New 2023 Honda Civic Type R.

The American Legion driver achieved NTT INDYCAR SERIES career-highs for a street and road course finish when he started 27th and finished 16th. He as running as high as 15th before he was passed by Colton Herta for that position in the closing laps of the race.

By advancing 11 positions from where he started, it was the best for Johnson on a street and road course.

His IndyCar career high for any race was an improvement of 12 when he started 18th and finished sixth on the 1.54-mile oval at Texas Motor Speedway in the March 20 XPEL 375.

Johnson and his No. 48 Carvana/American Legion team celebrated the statistical improvement when he drove his brand new, Legion-inspired Carvana livery back to the pit area after the race.

“You’re going to have to wear glasses and cool suits from now on,” Johnson’s race engineer, Eric Cowdin, told the driver after the race.

Johnson competed in the race wearing glasses to improve his vision inside the race car and also wore a specially designed cool-suit so he could beat the heat on the 13-turn, 2.258-mile Mid-Ohio Sports Car Course.

“You guys’ rock, thanks,” Johnson said to his team before rushing off to catch a flight to Europe.

“It’s my best road course finish and the most competitive finish that I’ve had,” Johnson said. “I feel our approach this morning to Sunday warmup gave me the balance I was looking for and not concerned about what my teammates were running and that served me well.

“It’s the most competitive I’ve been, and I look forward to building on that.”

Johnson’s racing goal is to finally get into the top-15 and set another goal from there. He came close Sunday at Mid-Ohio.

“I’m really exciting for it,” Johnson said. “We have a good direction here and what I need to feel in the race car to have confidence to go fast.”

While Johnson raced away to catch his flight, Cowdin explained the reason that helped move Johnson forward.

“We had a lot of discussions this weekend about what we need as a team to move him forward,” Cowdin said. “There are still a lot of learning going on, but as a group we are starting to understand fundamentally what it will take to get him to the next level.

“We made good decisions in the pits. He executed on the track and hit his marks. For us, we have to execute on race day. We took a small step in that direction today.”

Cowdin believes the next step is to improve Johnson’s qualifying performance to help move him further up the starting grid. That can help him finish higher in the races.

“The lateral grip of these cars is pretty phenomenal on a bad day, so when you are qualifying on Firestone Reds and trusting that grip level, that is something that is coming online for us,” Cowdin said. “We have found some things that he can trust this weekend.

“We have to take the next step and we are going to keep going.”

Blair Julian, Johnson’s race strategist on the timing stand for Chip Ganassi Racing, called it a solid job and a good team effort.

“Keeping it clean was really the key,” Julian said. “He had some good pace after the first stint and that was encouraging. The Reds weren’t our strongest but when he got back on the Blacks, his pace was good and kept it on track. He fought hard to keep his track position and the guys on pit lane did a good job.

“It’s a big challenging not having the laps all these guys get in qualifying, but his expectations are reasonable and realistic. I think the team is supporting him well and the team is heading in the right direction.”